There is always something fun about serendipitous happenings. Last evening I walked over to the garden because the day was lovely and the end of day promised to be beautiful. I didn't take a bag with me (big mistake) and ended up with an armload of tomatoes to carry home. Oy!

One of the gardeners who hangs out with Smith was there picking ears of corn from his garden. A big pot of water was starting to boil in the garden's outdoor "kitchen".  He said a few others were gathering for a mini-cookout. He hoped Smith was coming, but alas, Smith was working late. He said I should stay. So, I did. First, I ran home to cut up my tomatoes and grab a coat (it was chilly). 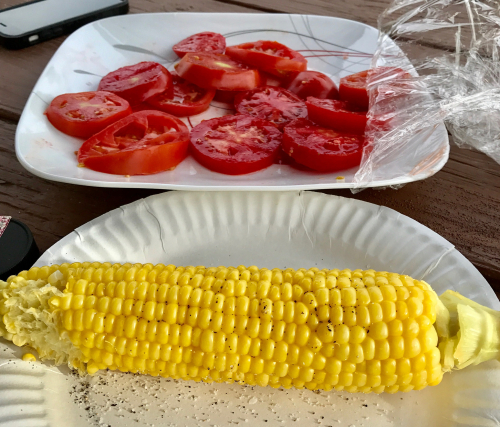 Unfortunately, I didn't think to grab much more, but Alan had a knife, paper plates, a pat of butter, and I had salt and pepper in my car (don't ask). Only four of us were there to indulge in the delightful feast of freshly picked corn on the cob (the best ever), and sliced tomatoes. No forks, no napkins--only the essentials of friends and good food. We cleaned up our mini-feast just as the sun started to set. 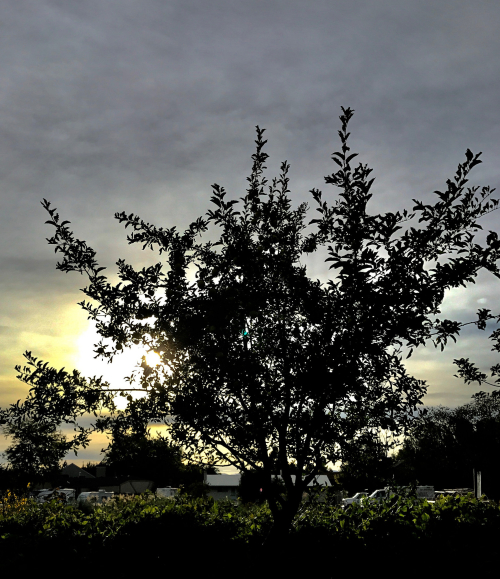 The cold and clouds of last evening were a portend of things to come, as this morning we're having a rainstorm like we haven't had all summer. I predict we'll be seeing snow on the mountain peaks from this one!

This sounds and looks absolutely perfect, and I bet it also tasted wonderful. I'm glad you got to enjoy it before rain started, but rain and the beginning of snow pack are also good things. I love that you have salt & pepper in your car!

How lovely! I like my community garden, but I do wish we were more of a community...

There's nothing better than corn that is cooked just as soon as it's been picked! Sounds like a really fun impromptu time!

That sounds delightful and delicious!

The corn you gave us was delicious, and no worms! The tomatoes were awesome, too.

The corn and tomatoes looks so delicious! And, here is to impromptu evenings with friends!

Sounds like a perfect meal. Great friends and good food! Doesn't get much better than that!

I love that you were able to create a perfect meal with what you had. Yum! I love corn on the cob immensely and rarely have it.

How fun! I hope your weekend was just as nice!

Oh, what a wonderful gathering & sharing of the bounty! I love that last photo... so beautiful.

We just had the last of the fresh corn on the cob last night. It was delicious, pulled that morning and placed in my CSA box. But your feast sounds better! I love the idea of gathering around outside and sharing your bounty with one another. Your community garden seems to be a blessing in many ways. Have a wonderful week, Margene.