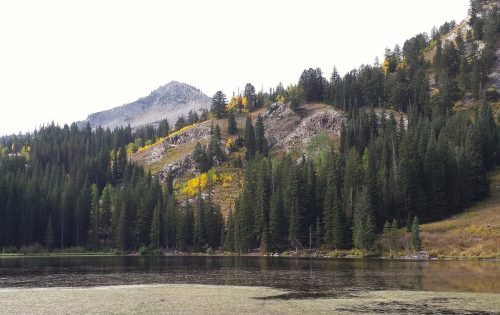 It's been years. Back in the 80s, which is so crazy. How can it be that long ago? Let's say it was 1983, during the years we spent camping, sleeping on the ground, often without a tent, and cooked breakfast and dinner on an open fire. We often reminisce about the amazing meals we had. Like the time Camille readied a huge prime rib roast to cook as soon as we arrived at our campsite. We would head off to the wilderness of the High Uinta mountains and four-wheel the mountain trails until we found the perfect spot. We liked to have a creek or a lake nearby, which made life a little easier, but was not necessary. As soon as we found the perfect place we'd build a fire and get the coals red hot. The rib roast was slow cooked in a pit, surrounded by hot coals, and it was the best piece of beef we ever had. We were starved by the time it was ready, but it sure was worth the wait.

But, I should be talking about breakfast as it's Kat and Carole's "Think Write Tuesday".  When we were on our camping trips, breathing in the fresh mountain air, our appetites were enhanced. We took extra care in planning our meals, as one need not eat tin foil dinners when four-wheeling in the wilderness. Our friend Dave was the chef and everything he cooked was delicious and memorable. I could go on and on about his meals, but his mountain breakfast is something we still talk about, brag about, really.

Dave was always the first one up in the morning and he'd start the fire and put on the coffee. He would make sure there was a flat rock on the edge of the fire pit for his big old fashioned enamel coffee pot to rest. He'd get the water boiling and then tossed in a big handful of coffee and let it boil until it was dark and strong. When you wake up in the wilderness, nothing smells better than strong coffee.

The next thing he did was cook up a ton of bacon in his well seasoned cast iron skillet. When the bacon was nice and crisp, he's slice a bunch of bagels and crisp them up in the bacon grease. The best way to eat a crispy bagel is to slather it with cream cheese and topped with crisp bacon. The bagels were the perfect appraiser to what comes next, mountain eggs!

Mountain eggs are the pièce de résistance. They cannot be repeated without an open fire, a wood fire, in the middle of the wilderness. To begin Dave would add a cube of butter (yes, I said cube) to the leftover bacon grease, and as the butter melted, he crack a dozen eggs (or so) into a bowl, stirred until fluffy, then poured them into the skillet. As the eggs cook, he'd add in chunks of cheddar cheese and a big bunch of sliced jalapenos. The addition of the "mountain pepper", ashes from the burning wood, was the true seasoning for the eggs and that just happened as they cook. When the eggs were the right consistency, Dave liked them custardy, he'd serve them up to the hungry, waiting gang.

That sounds so unbelievably delicious! So much excellent going on in that iron skillet. And the best ingredient...friends!

Ah, Margene! You evoke such sweet memories with this lovely post. Those were some good days!

Oh my goodness... salivating over here!! It almost makes me want to go camping! ;)

Wow! I am not a camper, but I want this breakfast yesterday! It sounds fantastic - and in my minds eye, the scenery is amazing. Food and friends do indeed make the best of memories!

Oh, Margene! I can smell that coffee . . . and the bacon . . . all the way through the internet and right here at my computer! PERFECT breakfast! Mmmmm.

I, too, can smell the coffee via your words, and those bagels and eggs sound sublime. In addition to your food memories, I'm also impressed by your adventurousness. I'm half afraid I'm going to ruin a prime rib roast in the oven on the few occasions I've prepared one, and there you and Camille were, cooking in the wild!

Goodness! Please take me on your net camping trip! <3

Wow! what a story...what meals y'all enjoyed. My best days always start with the aroma of freshly brewed coffee and imagining that smell filling the chill mountain air is breathtaking.

You captured the setting of your mountain breakfast perfectly, I can picture you all there eating and laughing and enjoying each other's company. It reminds me of our meals while reenacting. There's just something really special about cooking in a cast iron skillet over an open fire and then eating outdoors.

When I was much younger, my husband and I would go to the local park on Saturday mornings and cook breakfast over the fire, usually in the bracing cold air. Nothing makes bacon taste better than cold, fresh air! So I can totally relate to your memories. It has finally gotten a tiny bit cooler here, and this was a lovely reminder.

Oh man I haven't had breakfast yet. Stomach rumbling!

Definitely not a camper, but that breakfast sounds delicious. How talented your friend Dave was to do all that over a campfire!

the eggs sound really good but they just might not be heart healthy :) What fun memories!!