Zeneedle...needleart as life
Home Archives Profile Subscribe
Warmth of Wood
So Many Years 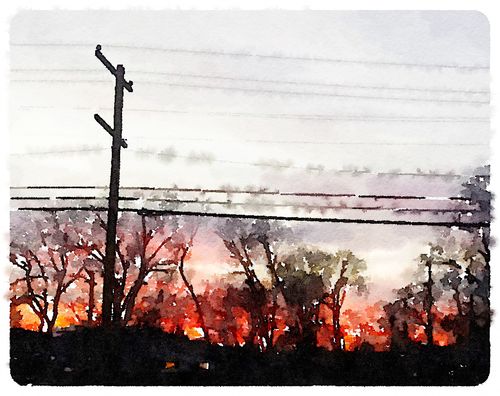 The one thing you can count on around here is the sky is going to put on a great show. This is the sunset a week ago last Tuesday, which turned out to be the perfect photo to play around with on the Waterlogue app. Since inversion season passed the sky has mostly been blue, but we've had a few small storms move through. 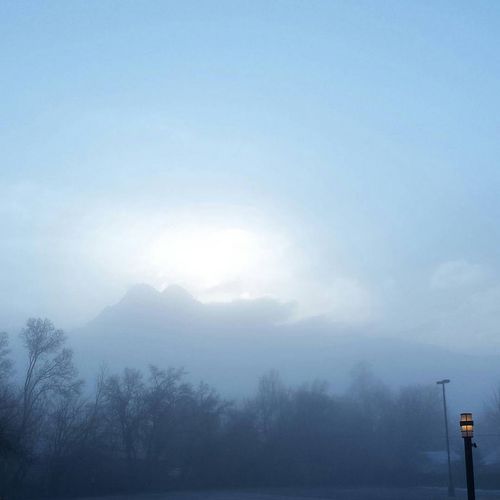 Monday morning a fog bank moved through just as I was leaving for work. The drive was a little challenging, but the mood created by the fog was quite unusual. Within the hour, the sun was high enough in the sky to clear the fog away. The rest of the day was clear, the blue sky highlighting the newly white mountains. 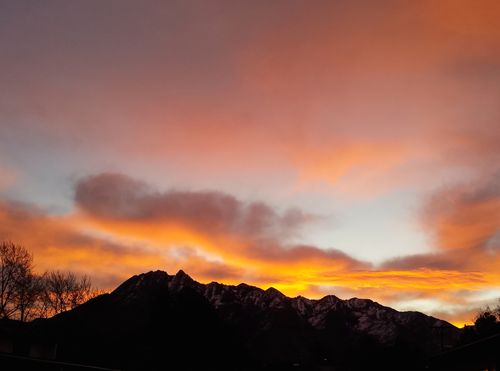 Yesterday, just as Smith was leaving for work he turned back to tell me the sky was afire. I went out in my nightclothes and stood in the cold to snap a few photos of the golden, spectacular, sunrise. 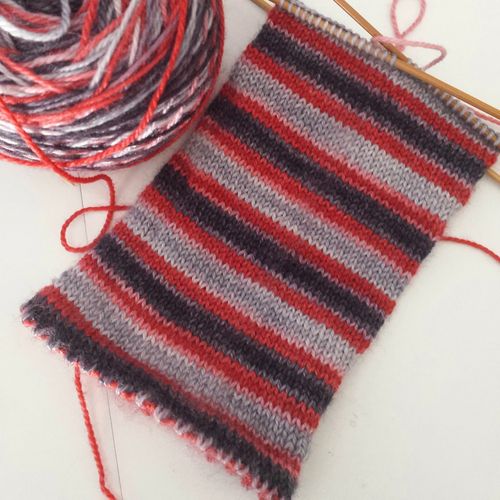 When I'm not watching the sky, you might be surprised to know, I am knitting a sock. My sock drawer is in imminent danger of becoming devoid of hand knit socks. I may not be able to keep up with attrition, but my plan is to do what I can to replenish the waters of what has become a drought of sock knitting. Needles this small are not friendly to my arthritic hands and I can only knit a few hours a week. However, I'm determined and have made good progress. I love the red/gray/black stripy-ness of this sock yarn, Biscotti and Cie's, Loopy Herman.

Happy Weekend, my friends. I have a three day-er ahead! Yay me!

I love your sky! Always changing; always beautiful. Thanks for sharing it.
I, too, am feeling the need to replenish my wearing-out handknit socks. After so many years of not-knitting-socks, I'm in rather desperate need. I love Biscotti and Cie sock yarn -- stripey perfection! Enjoy the weekend, Margene. XO

Hooray for 3 day weekends, they are the best! I love your sky, it's always beautiful and always changing. And look at you knitting socks! Woot!

Fantastic photos, thank you for sharing! And, I love the sock - truly beautiful. May the knitting be easy and quick!

You have such pretty skies out there. It seems as if you have a sock emergency on your hands. I bet by the time the colder weather comes back next winter you will have replenished some of your drawer.

Socks! I am delighted to see that you are knitting them, albeit very carefully. YAY!

Loving your sky photos! And that sock... one of my favorite color combos. Happy 3-Day Weekend!

yummy yarn!!! I know I can always come here for a beautiful sky watching experience!

Yay, you , indeed! Have a fabulous 3 day weekend, and enjoy knitting those socks.

The Waterlogue photo is lovely - but really, all of your sky photos are. :)

Love the stripiness of the socks you're knitting.

so many lovely views! your skies are some of my favorite posts on Instagram and it's great to see more than one of them at a time. also a Waterlogue! did you get a new phone? (and ps, I think our sock drawers are in a similar state...and their chance of replenishment are about even too :-)

Beautiful Skies and Beautiful Stripes. Hope you hands allow you to continue to fix the sock drawer situation.

You have the perfect view for skywatching. Good luck on your sock. It's off to a great start.

Ditto! Ditto! Ditto! You are so lucky to have those wonderful skies...and now, the Waterlogue app! Wow! Love the soon-to-be socks; maybe in the fall I'll be able to resume knitting ...if I get my several, last count 4, quilt projects done by end of Sept.