Returning to the normalcy of a workday life (as well as a world of "have to,") after the long, lovely weekend feels like a rude awakening.  We had a mix of weather starting with Tuesday, when I missed SnB as the roads were too treacherous. Wednesday and Thursday we were visited by the "dreaded" inversion, but the New Year started with clear blue skies. I hope the clear sky is a portend of the coming month, as we would not like the inversion to come in and stay. 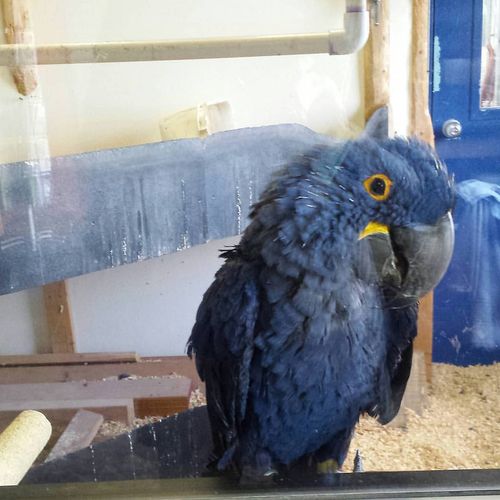 My weekend was relaxing, productive, and had plenty of fun scattered in. Even at the carwash, as I had the salt cleaned from my car, I found a friend who had a moment to share a little conversation. We had a grand time laughing and squawking. I complimented him on his choice of color. 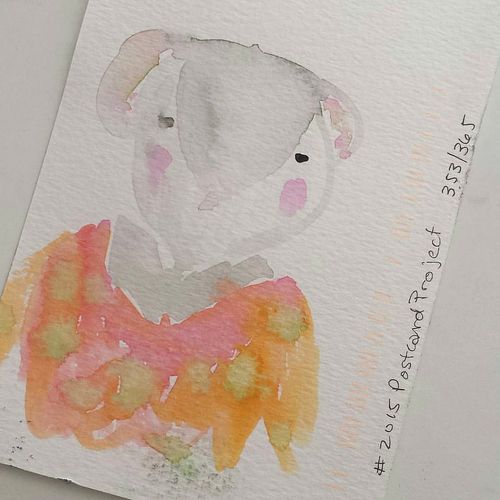 I was honored to receive one of Beverly's hand drawn postcards of her 2015 Postcard Project. I have enjoyed watching her daily progress of creating one card for every day of the year. Her new daily project looks even more ambitious and personal.

Smith and I went to a concert on the spur of the moment, something we rarely do. The music was a joyful way to bring in the New Year and being spontaneous is one of the things I'd like to work on in 2016. I don't usually share intentions and have never picked an official One Little Word, but I'm thinking about directions to head in 2016. I may even end up picking a "OLW", but that's still up in the air. 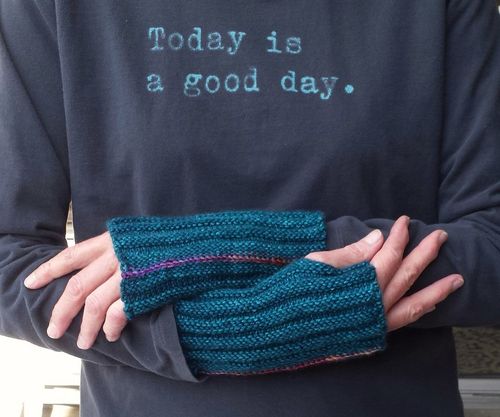 There were a couple of "finishes" in 2015 and a not so great start for my 2016 crafting. I do not accept it as a failure, but will treat it as a slight delay. My last project of 2015 was a pair of Gale's Trip Mitts and I think they're so cool! Somehow I ended up buying a too light weight yarn and the second pair turned out too small. My first project of 2016 will started later this week after I procure the right supplies.

Despite the crafting setback, 2016 is going to be a great year for making, reading, moving, and doing. Plans and ideas dance around my head and I'm looking forward to seeing where the path of a new year leads.

Making, reading, moving and doing all sound wonderful to me!

I was a One Little Word failure in 2015, but I think we each need to do what works for us individually. Love your Trip Mitts and how you make the rude awakening return to normalcy so beautiful and positive!

I just love the color of that bird. Such a pretty blue. They match your awesome mitts! I think 2016 is going to be a creative year for many of us.

Happy New Year! Your word could be all encompassing. I went with abundance. Laughter, love, health, friendships, creativity, adventure, memories. I want all of that. I can make one small change every month in a different area.

Here's to no inversions... Also, your car wash is way more interesting than mine!

Hope the inversion stays away! I love your mitts (so much so that I'm copying you and knitting a pair for myself -- because I really need a bit of a "palate cleanser" when it comes to knitting). And there are no OLW "fails." Either it speaks to you . . . or it doesn't. And that's all there is to that. :-)
XOXO

I considered myself a "failure" at OWL in 2015, also; though Kym tells me that there IS NO FAIL... and I like that. I did think of it every now and then through the year, and it stays with me. I may pick another... still deciding. ;)

My 2016 crafting did not get off to much of a start at all! I've made one (and a half) pair of Trip Mitts for a gift and have a couple others slated... soon! Maybe even a pair for myself someday.

The feeling of all manner of things dancing in the head is mutual. Happy New Year!

The path of the New Year will be a light and joyous one. Looking forward to it!

I hope your New Year will continue as it has begun, with joy and ambition. Happy New Year, Margene.

You are always so productive and positive. The mitts look very cozy and lovely.

love the blue theme and those awesome mitts :)

Making, reading, moving and doing. I'm going with your plan Margene! And I like the mitts!

I'm finally catching up...and your 2015 recap post was the highlight (so far :-) but seeing your welcome to the new year is a close second. all the best, my friend, and I really do love your optimistic spirit! and the mountain views. with snow. (it's chilly here, but ...not quite the same)

I'm catching up on my blog reading--I LOVE how your mitts turned out--and I especially love them with that shirt. Wishing you a wonderful new year!

I'm also catching up and one of my 2016 intentions is to do a better job of staying in touch with all the wholesome goodness and inspiration from blogs, especially those I read like yours. I certainly applaud your accomplishments and 2016 vista. Very uplifting and motivating. Carry on!