Zeneedle...needleart as life
Home Archives Profile Subscribe
When You Care
I Love Weekends

Bonny named her beauties, Scarlet and Minerva and I've named mine Sadie and Stella. The two of them have been sitting on my dining room table since early December. For two weeks that sat, unchanged, which left me to wonder if they were alive. When I brought the two of them home, they were boxed up and dried up, but still, I thought why not give them a chance. The only thing they needed was to be watered. 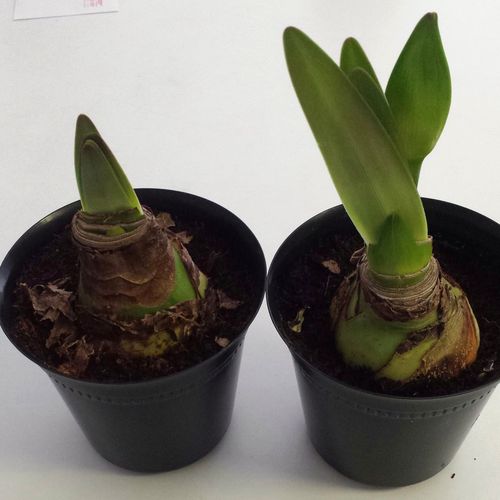 It was nearly January when Stella decided to push through a bud, and then a few days later, another! At first, Sadie put forth only leaves, but, eventually, a bud became apparent (can you see it?). Warmth, light, and water have paid dividends, as once they decided to grow, they've been going gang busters.

Their color was a mystery from the beginning, although Stella has revealed her gloriousness. I remain curious as to the color of Sadie dress, but I'm going to bet she will be following her big sister's lead. 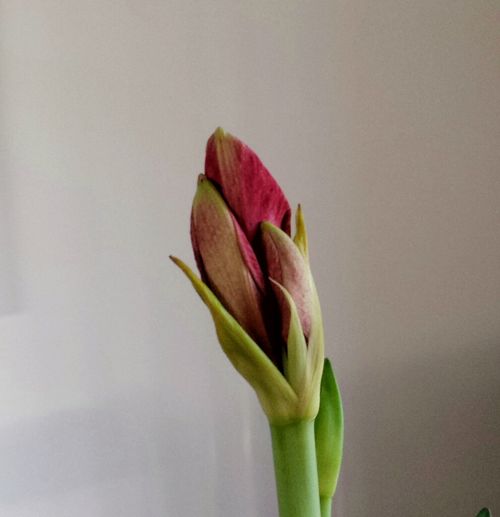 The amaryllis blossoms may have been slow in coming, but one thing is certain, I'll have color for a few more weeks to come.

Lovely! Greenery and color are much appreciated in the winter.

I'm glad to meet Sadie and Stella! They are beautiful, and I appreciate their good behavior with upright leaves. None of that flopped over nonsense for them! Thanks for sharing your girls' loveliness in winter.

These are lovely! I had to toss mine as they just never did anything. Very disappointing! Hope yours last for a long time. Color in the winter is priceless.

This is just a wonderful story!

Lovely. I have 2 that did the same....I am now awaiting them to reveal their colors to me

Those are beautiful! And I think it's nice that they are late bloomers, we could all use some color and cheer in January.

Sadie and Stella--such elegant ladies. If they were actual ladies, they would definitely be wearing white gloves!

Wow! Those are stunning reminders of spring.

It has been a couple of years since I last grew amaryllis in the winter. And now I realize I miss them!

Stella is showing off with three flower buds. So pretty!

Now you've got me going to find some paper whites if I can. Stella and Sadie are beauties!

What super fun to name your amaryllis...makes their growth and appearance all the more fun!
We no doubt would like a little brightening right about now with our "blizzard" gaining full speed ahead!

So beautiful -- and such a perfect counterpoint to the cold, gray days of January. XO

OH! Beautiful!! I was nearly tempted at the store a while ago... and now I wish I'd given in. Enjoy!!