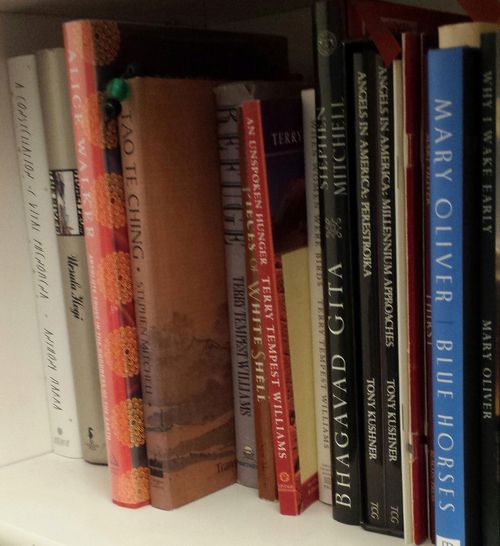 When I was a kid I thought it would be wonderful to be a best selling novelist. I read as many books as I could, my nose constantly buried in a book, and I thought writing a novel would be FUN! But, novel ideas rarely came my way, therefore, I never put pen to paper. I've concluded novel writing would be a very hard thing to do (especially when you have no novel ideas).

Here it is ToT and Carole has requested we writing the first line of a novel, but I don't think my first line(s) will capture your imagination. Instead, I thought it might be fun to turn this into a quiz. Each quote comes from one of my favorite novels and I want to see if you know any of them (without searching for the answer on-line). Answers to be revealed at a later date.

1. Barrabás came to us by sea, the child Clara wrote in her delicate calligraphy.

2. I am fifty-four years old, the age my mother was when she died.

3. A candleflame and the image of the candleflame caught in the pierglass twisted and righted when he entered the hall and again when he shut the door.

4.The idea of eternal return is a mysterious one, and Nietzsche has often perplexed other philosophers with it: to think that everything recurs as we once experienced it, and that the recurrence itself recurs ad infinitum!

5. I have been afraid of putting air in a tire ever since I saw a tractor tire blow up and throw Newt Hardbine's father over the top of the Standard Oil sign.

6. On a mountain above the clouds once lived a man who had been the gardener of the emperor of Japan.

7. Many years later, as he faced the firing squad, Colonel Aureliano Buendía was to remember that distant afternoon when his father took him to discover ice.

8. The train came out of the long tunnel into the snow country.

9. I had seen her just the day before--a day of pale blue skies and summer breezes.

10. They dressed me in white for my daddy's funeral.

I'd love to know if any of the first lines make you want to read the book. If so, leave a comment and I'll share the title with you and I'll reveal the titles on the list later in the week.

I absolutely love your quiz! I think #5 is from The Bean Trees and #7 is from 100 Years of Solitude. Numbers 1 and 3 are so evocative they definitely make me want to read the books. Thanks for a lovely literary start this morning!

I love #5—quirky and offbeat! I think I have read it, but might need to read it again.

You have me completely stumped. That doesn't mean I haven't read any of these but boy, I have a terrible memory.

I recognize none of them, but I absolutely understand why you chose them.

This was a great spin on TOT! I love it!

Love this so much. I recognize almost all of these but can only match three of them with the actual title.
And I agree, writing a good novel must be the hardest work. Every once in a while I hear a phrase that'd make a great first sentence but no way could I make it into a paragraph. Let alone a chapter or book!

Sadly, I recognize none. But #5 definitely tickles me.

#5 is very interesting to me! Some of these first lines seemed very familiar but #5 made me laugh!

Some of them seem familiar but I am uncertain about their origins. Now you have material for 10 new posts--that ought to help with the November blogging!

I recognize none of them. But I want to know what happens next with 3, and possibly 1.

A couple of them sound so familiar to me, but I have no idea! I'm looking forward to the reveal later in the week!

What fun! They sound familiar but I just can't tell!

great minds :-) (except I didn't wait to share the answers...darn it - NaBloPoMo opportunity wasted!) #2 is the only one I'm certain of. that was one of my favorite 2015 reads. look forward to your reveal...and to adding a few more books to my TBR.

You got me! Looking forward to the reveal . What a fun way to interpret the prompt.

This is so much fun! Sadly first lines rarely stay with me. I'm anxious for the big title reveal.

Incredible quotes! I want to read ALL of these books!

Incredible quotes! I want to read ALL of these books!

I'm with Carole - some of these sound so familiar, I know I have read the book, but I'm drawing a complete and total blank on what book it is. It's a wonderfully tantalizing list - definitely some items on here that have me not wanting to stop at just the first sentence.