I started walking when I was 10 months and by the time I was a year could walk quite well and, according to mom, quite quickly. The photo below was taken during my first walk outdoors. The day must have been a warm winters day, as it had to be February (a month before my first birthday).  It's hard to tell but the sweater I'm wearing appears to be handmade. Mom would have put the pants on under my dress to keep me warm. 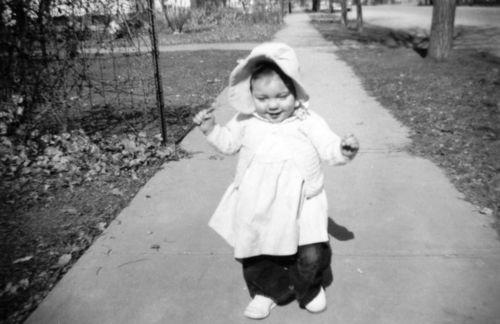 The picture isn't very clear, but the sweater looks like its crocheted, which is likely, as both my mother and grandmother were crocheters. I'm wearing the same sweater in the picture below (but not the same bonnet).  There are many pictures of me in bonnets, but only until my first birthday and I have no idea why, unless my curls became to cute to cover. 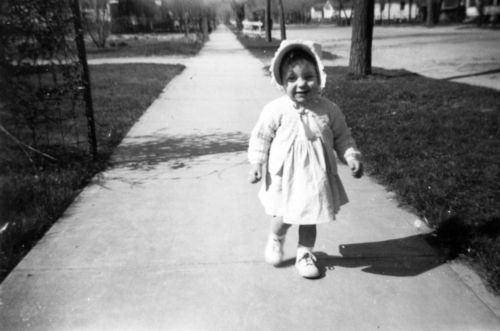 The sweater was pale pink and I know because it's in mom's cedar chest. What else would you dress a baby girl in in 1951? As you can see, the leaves have been cleared from the yard and I look slightly older than in the first photo, and since my birthday is in March it appears the winter of 1951 wasn't much of a snow producer. 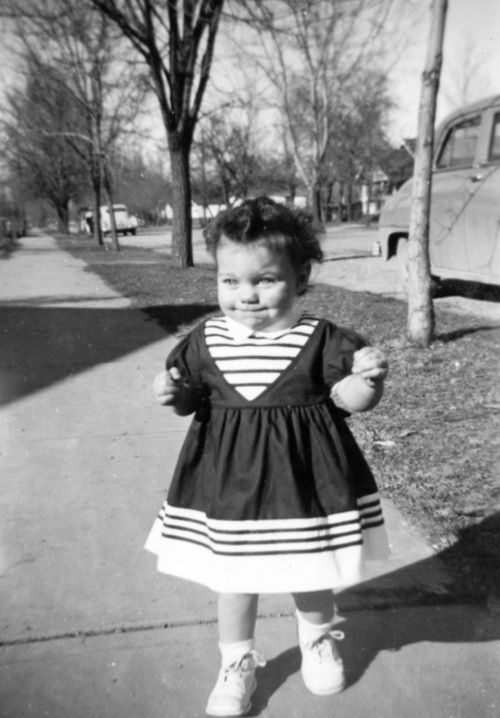 This photo was taken on my first birthday. The trees have not started to bud. In Idaho. In March. I'm surprised!  My birthday dress was bright red and had a matching bonnet. The walking shoes are the ubiquitous white baby shoes of the day and, since my sisters wore the same style, they must have been the standard for years to come. 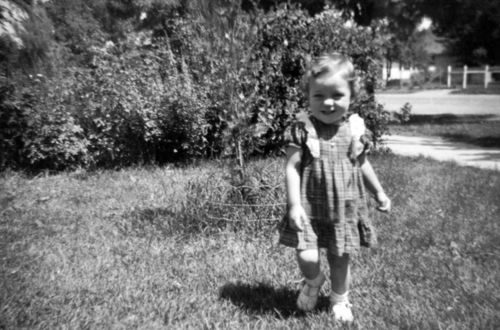 This picture was taken when I was close to 18 months and you can tell it's summertime. I'm dreaming of walking in the summertime today, as it was another cold gray day in Utah.

Did you notice the new look of my blog? It was a subtle change, but Vicki updated the header (3 new pictures) and I made a slight change to the background color.

I LOVE these photos! You look so proud and happy to be outside and moving, especially in the third one. Hoping you get some warm weather and those same feelings of happiness when you're stepping out today.

Those pictures are great! I'm pretty sure I have baby pictures where I'm dressed very similarly, down to the shoes.

You were such a cutie...and still are! And yes, I noticed a difference in the blog immediately. Love it!

The blog looks great! And there is something so sweet about those white baby shoes. I've still got Dan's!

Great photos of you walking - clearly it's a love that started early and it's wonderful that you've continued it. The new blog header is awesome, too. Also, Hannah wore that same style baby shoe in 1992.

The subtle changes in the header are nice. The white shoes were the order of the day in the 50's. There was a notion that baby feet would be ruined for life without the proper shoes. Like you, I remember clothing from a very early age--what does that say about us?

I love the picture of you in the red striped dress. You look so determined!

What treasures!! I remember visiting my mom when Katie was about a year old, and Mom wanted to buy Kate some shoes. Kate wasn't walking yet, though (she was a late bloomer at 18 mos) (that's not to say that she couldn't MOVE!), and the shoe store wouldn't sell them!

That's great that you have those photos to look back at. I just love the first one with your bonnet and fancy coat. You look so pleased with yourself!

You have so many great pictures of when you were little! :)

You are just the sweetest little walker! :-) Love the dresses -- and the charming little sweater. (I had those same white shoes.)

I love the new header -- and did notice the fresh color. Love it!