It isn't as though I live my life in fear of failure. I am a knitter after all, and as a knitter, there has been many a project that once made will never see the light of day. In almost any craft I've tried there have been triumphs and failures. Many of you may remember my attempts at fiber felting and toe up sucks socks. 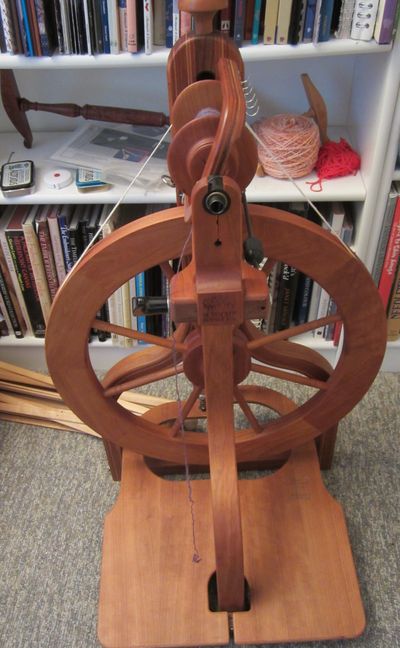 Some of the other fun things I've tried were sewing (made a skirt and a pair of pj pants), card making, and spinning. I learned to spin on a spindle and wheel and enjoyed the process very much. But the fever waned and I haven't touched a drop of fiber in several years. Fear of getting my wheel back in shape (will I remember how to put it together?), and getting it tuned properly, and/or making a mess of anything I try to spin, has stopped me in my tracks. This is a fear I hope to overcome.

I put many years into the study of embroidery and became quite accomplished, but it's an art I've left by the wayside to languish. I fear getting back on the horse, as I'm not sure how much of my ability has been lost. The drive to spin, or to stitch, is not as strong as it once was and I wonder if there is something lacking in me that I have lost this desire. Am I lazy? Have I, why have I, lost confidence in myself. Were they passing fancies? Being fickle is a little frightening, too.

So what would I do today if my fear was overcome?  The biggest fear is monetary expenses, as several of the crafts I'd like to try involve an investment in supplies. The investment could be lost due to poor quality of workmanship or the fickleness specter. 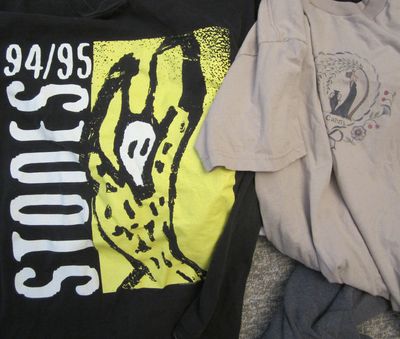 The top of my list of projects to try is an Alabama Chanin inspired by Vicki!  Alabama Chanin means an investment in cash and time, which strikes the fear chord big time! BUT, then Vicki inspires again, as she suggested I use recycled cotton knits. Guess what I have?  I pile of old t-shirts! I'm going to set fear aside, figure out what direction I want to take, and jump in and find my way.

It's always fun to try something new! As for your other skills, I bet they will come right back once you try again.

Vicki has inspired me to try an Alabama Chanin project, too! Let's dive in!

I'll be thrilled to see what you do. It looks intriguing.

Oh, you should definitely overcome your fear of the wheel - that shawl Cheryl knit with your gorgeous handspun was wonderful!

It may be that some of the things we try due to the influence of friends turns out to be a passing fancy. Passing fancies are OK! Its not like we are getting paid to stitch or spin or knit. So I don't think it possibly can be laziness.

For what it is worth--I think it's because you're multi talented and you always see something new to try--new mountains to climb. Definitely not laziness--just a natural progression

I love what Vicki has been doing lately, it's so pretty. I always love to give new things a try. Some things I find I don't love and they fall by the wayside, but other things I have tried have become passions. It's just finding the time to keep in touch with them all that becomes the challenge.

Give it a try and see if you love it too!

Yay!! Those look like excellent prospects for sewing up! If you get your foot caught in this rabbit hole, don't forget thrift stores... I found some brand new 4XL t-shirts the other day and that's a lot of fabric!!

To me, the thing is that you're curious and interested... even interested enough to try. You may love it, you may feel MEH, you may hate it with the passion of a thousand suns. I doubt the latter will be true, but you'd never know if you didn't try! It would be worse not to even try.

Most of my life I've found a new craft love, only to abandon it after the infatuation (or current trends) died. Knitting has stayed with me the longest, but even that has lost a lot of its glow for me in the past year since I've had to cut back on it so much.

I don't think trying different things, leaving some of them by the wayside, or even not trying different things is due to laziness, fickleness, or fear. Your thoughts sound well-reasoned and rational to me, and money and time will always be important considerations for most of us! Some wise person says, "It's the process", so I hope you enjoy all your processes, whatever the products!

Oh, this is very exciting! I'd love to be inspired to try this too.

Oh, I find that some of us just like new challenges. You don't need to admonish yourself for not continuing to do things you have mastered. All the things you learn in one craft are translated in one way or another to the next. Life is short! You're just trying to fit everything in! I'm looking forward to seeing how you like this new craft.

I've been watching Vicki too! Margene you're going to rock this! Just like everything else!

You never know until or unless you try something new right? Lazy is not part of your personality, so dump that idea. I think as we get older we prioritize and some pruning of previously loved activities occurs. There are only so many hours in the day. Sometimes they are picked back up and it's like riding a bike. It may take a few falls, but we're up and riding again in no time. Muscle memory is there. it needs a wee shake from time to time. :-) As Vicki said, you're curious and interested and that is a good thing in my book. Mwah!

I just think when there are so many options to explore out there, you really are just being sensible in thinking about the options before winding up with 300 new things, only one of which you are really truly interested in. (And I know you've been working hard on decluttering, so who needs those other 299 you maybe aren't sure about yet! You can always add something else down the road.)