We had a little party and I took a few (mostly blurry) photos, but I thought it worth sharing them, nonetheless.

Our SnB group celebrated its 10th Anniversary with a party and a gift exchange. Our group has been through the best of times and the worst of times. This is the place to come for support, encouragement, solace, and joy. Together we have celebrated births and mourned deaths, cared for each other in sickness and health. It's been a marriage of like minds and we're built true friendships.

The gifts this year ran through the gamut of patterns and yarns, but each one was exceptional, as well as, appreciated by all. The gifts are wrapped and out of view so no one knows what they'll get until the package is opened. It's all we can do not to open our secret gifts until everyone has one in hand. We then open each one and oh and ah, as the gift is revealed. 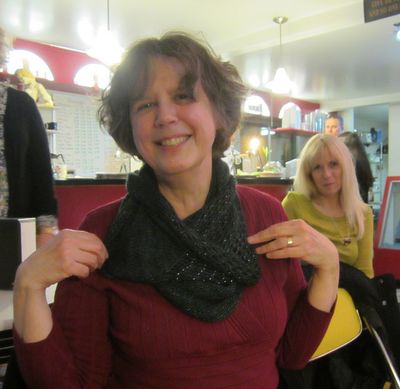 Jacquie received the exquisite beaded cowl you can see here, which was knit by Melanie. Behind her is Caroline who received Laurie's Linen Stitch scarf (the 10th one she knit). 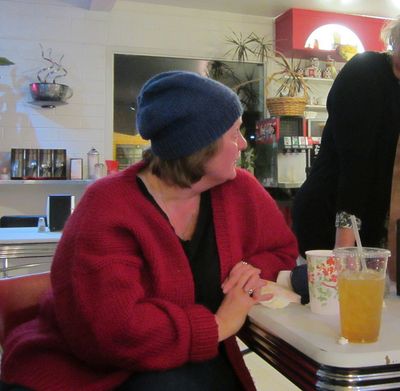 Laurie recieved Barley, a hat knit by Cheryl, which you can see here. 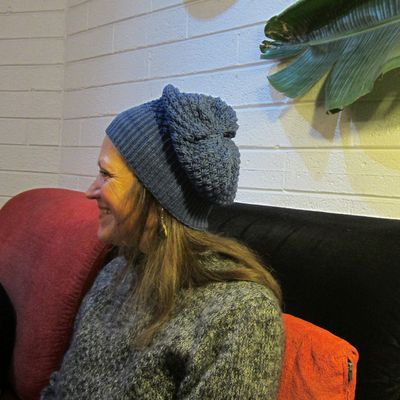 Cheryl received Anna's amazing hat, knit in 1x1 twisted rib with a crown knit of star stitch. I'm sorry I don't remember the name of the pattern. eta: Anna shared the link in the comments below. 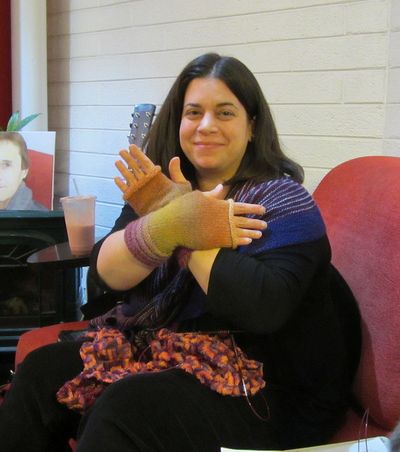 Susan (sorry for the very blurry picture) received Jacquie's 10 Shades of Gray cowl. Believe me, it was knit with 10 shades of gray. 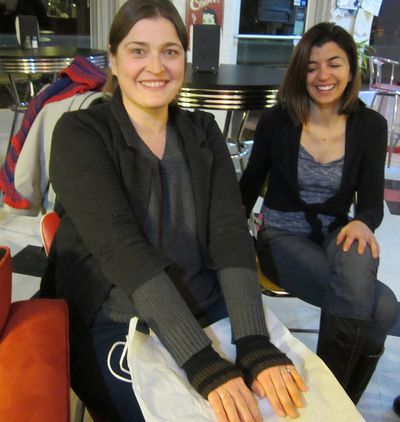 Melanie received wrist warmers knit by me (black and brown under the sleeves of her sweater) and I received a bright red scarf from Susan! 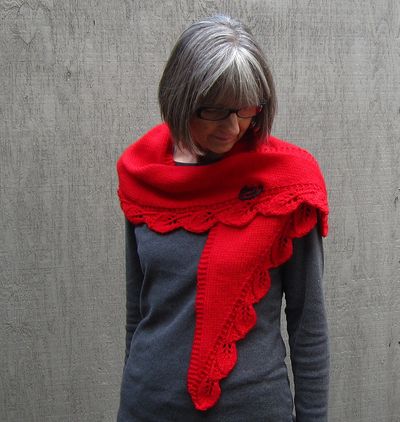 I had the luxury of time, as my photo was taken a few days later by Smith.

Other friends joined us at the party, but since we all had fun in the moment, few pictures were taken. We're looking forward to many more years of spending afternoons and/or evenings together to bitch, to laugh and to gossip and knit! We love our grrls!

I love that you have this party every year in celebration of your group. Congrats on 10 years!

What a precious gift. Such good friends.

Lovely. I look forward to getting to know the group as I am bake to attend on more Sundays.

Wonderful tradiation, and even better network of good people. You are fortunate.

Thanks for sharing! Miss you all.

A knitting group makes for very special friends. What lovely gifts you gave each other!

That's all so wonderful -- 10 years of knitting and friendship! Can't beat that.

I think I should have adjusted that hat's slouch a bit before the photo! I should get a better photo to do it justice. The party was great, and all of the swap items were fab.

What a wonderful group -- and such a perfect way to celebrate! (And that red scarf is absolutely stunning.)

10 years! Very cool. :) And the gifts are all lovely indeed.

You look like a model in your picture. Beautiful!

What a blessing your group is for all of you. I'm just a bit jealous. All the gifts are great, a hand-knit reminder of friends. I love that scarf you got! Someone knows your colors well.

Thanks for sharing! I recall attending your group a few times, and such fun that you have been able to keep meeting for 10 years!

10 years! wow and congratulations! I'd love to know how the gift knitting works. So cool to gift and receive handknits...wonder if my knitting group could do that too! and P.S. that red Saroyan is perfect on you!

what a fun group, happy anniversary!! May you have many more happy knitting meetings in the future :)

That was the Hinagiku hat that Cheryl got!
http://www.ravelry.com/patterns/library/hinagiku-hat

And because I love and fear Susan, I will not make the joke that I want to make.

Love you in that red!