A Change is as Good as A Rest

We all know the age old story, the complaint and lament of "not enough time". We are bombarded with ideas of how to spend our time. Life is full of choices and it can be difficult to make a decision about what to do next.

Lately, I've decided to make a change and dedicate some of my (precious) time to exercise. I've tried to be active most of my life, but the last few years I've slacked off. My daily walk isn't paying off in ways I'd like and back issues have kept me from other forms of strengthening. The aging process isn't kind and I'm loosing "it" so I need to use it. The all of it.

My mother would often say "A change is as good as a rest". It's very true. Within weeks of starting pilates my back pain has started to abate and I've been able to be more physically active. 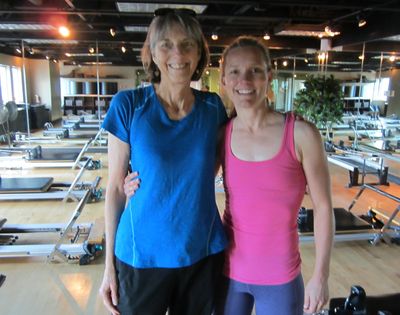 I can feel my muscles working, "firing" as my instructor Betsy calls it, and feel them growing stronger.  It's an awesome feeling. I've made time for 2 classes a week and I'm loving it. This means less time for knitting and reading, but the pay off has been worth it.

Even though knitting is less frequent, there has been some knitting and I have two finished projects to show off (pictures to take, posts to write). I promise to do soon. In the meantime, I'll tell you about the new project on my needles. This is still a knitting blog (over all). 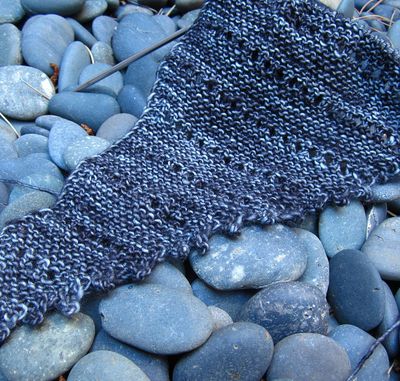 The reason I decided to knit Joji Locatelli's  Imagine When was its interesting construction.  A triangle is created by increasing along one edge and the connecting subsequent triangles are created with short rows. The shape is asymmetrical, with added design details of eyelet rows and picot edging. Knitting is easy enough to be relaxing, but interesting enough to keep my attention and I'm loving it.

Truly, I didn't mean to disappear. I had a post all written, but lack of picture (and, I confess, lack of interest) kept me from my blog duty. Last week I took Thursday and Friday off work and had a lovely mini-vacation. Or stay-cation, if you will. A break in the routine is vacation enough for me. The weather was cooler than the usual 95+ temperatures we've endured for the last month and it rained a bit almost every day. The temperatures were delicious for a change. 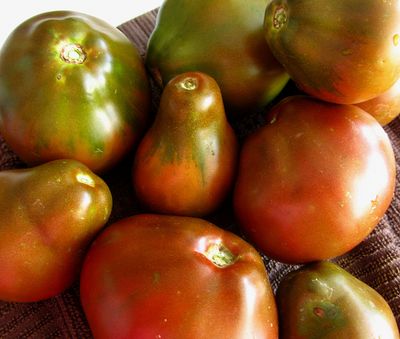 A couple of mornings I worked in the garden and hauled in bag after bag of veggies, mostly tomatoes. We gave away as much of it away as possible and cooked up much more. I'll be making roasted tomato sauce and minestrone soup all week, maybe all month.

The high-light of the weekend was the quick hike we took Friday morning. When our first choice of trails was rained out (we could see the peaks from home) we decided on another, lower elevation (8,500') hike. 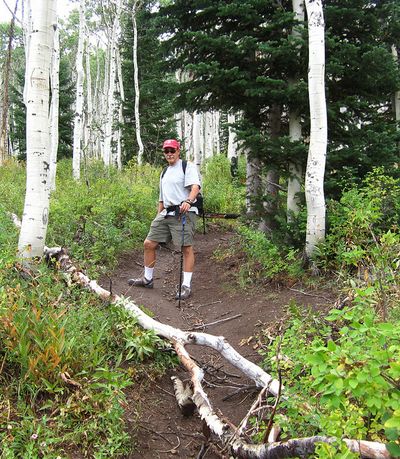 The last time we'd hiked Willow Heights was in 2006 (a reveal from the blog), which is frankly unbelievable! Why has it taken so long to get back here? The trail is steep, albeit short (.75 mile), as it heads straight up the mountain (600' elevation change) through an aspen forest. The trees are covered with eyes, the forest is watching. 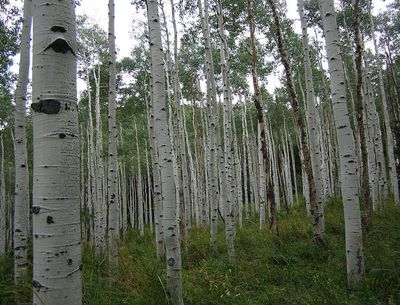 Near the top the path tapers off through several meadows (beautiful in wild flower season) to a small lake. The lake was created by a beaver dam, which is now over 100 years old. Since I was there last the landscape has changed radically, as dam is now completely invisible under its cover of willows and vegetation has filled in around the lake. 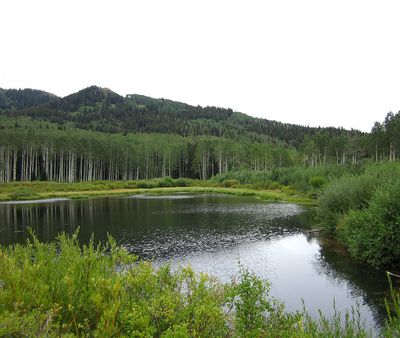 There were signs of moose everywhere, but not one in sight. Had we been a little earlier in the day we most certainly would have seen one (or two) and we would not had to worry so much about the rain. We barely made it back to our car before the clouds opened. 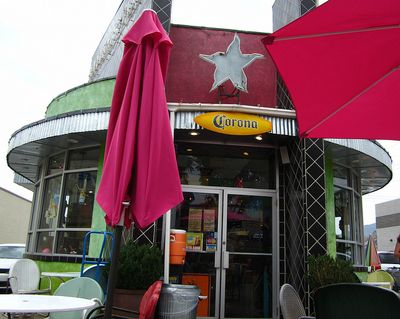 We stopped at our favorite taqueria for fortification (once again dodging the rain by mere minutes) and then set off for home to watch the downpour of rain. 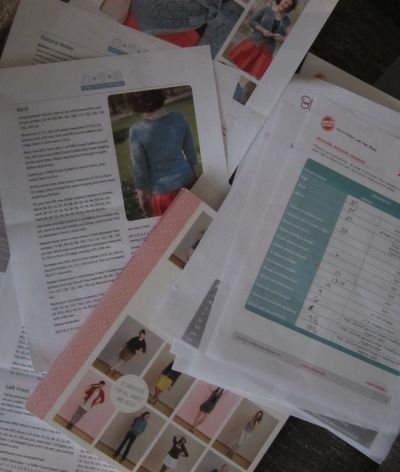 By trial and error I've come to understand what it takes to make a sweater fit. There are a few basics I find work best when knitting a garment to fit my body. First would be knitting each piece, front, back, and sleeves. Yes, this means seaming the sweater together. (I heard a bunch of you gasp.) I don't mind seaming. I like to be able to add waist shaping and length to my sweaters and a sweater knitting each piece is easy to modify. I block as I go to check measurements and gauge.There is a fair amount angst involved.

The problem I'm having NOW is confidence. The self doubt is strong. I haven't knit a sweater since Twisted up in Blue which was finished in April of 2011.Yes, that is 2 and one half years ago.What confidence I'd gained over the years has abandon me and questions are bouncing around my brain like a hundred uncoiling springs. They have all but stopped me short.

I know what to do to get started, but I need to stop this monkey mind of self doubt and get on with it! I'm trying my best not to hyperventilate. It's only knitting and I can rip and redo, make changes, which I'm not adverse to doing. The sweaters I like best are the sweaters I knit almost twice anyway.

I've found great help with Amy's book and video classes and getting back on the horse is the best thing I can do. It's just, well, the first step is always the hardest.

Raise your hand if you think I haven't been knitting.

I'd say that's about 50% of you. Well, knitting time has been hit and miss but I have put for an effort finish the on the bind off on Sweet Dreams. We're talking picot bind off, the three stitches on, five stitches off kind of bind off. It is a considerable investment in time and every stitch worth worth the effort. Beads, handspun, cashmere, gloriously red...Sweet Dreams is going to be an elegant, slightly decadent (cashmere!) piece of perfection. 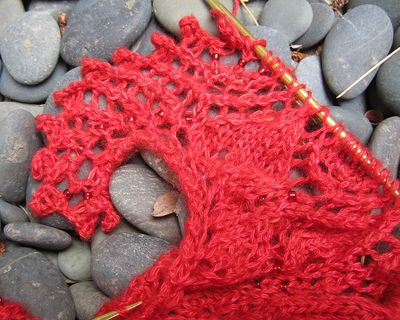 This picture is decieving as it doesn't show my progress over the last few days. By a little knitting here and there I have been able to bind off about 3/4s of the shawl. Blocking should be this weekend! (Given half a chance and an hours worth of time.)

Every once in awhile I give Leftie a quick look, but its whimsical leaves are not something I enjoy knitting. There are no plans to abandon it, so it will stay in my knitting basket, the basket of hope. My eye is on two other projects which will likely be on my needles soon. Imagine When by Joji Locatelli and Aislinn (yes, I'm gong for it), by Amy Herzog. All plans are subject to change as I hear Twist is coming out next week. Who knows what could capture the imagination!

Invested in the Sky

Saturday I went to Silver Lake with friend who had never been. We went up early in the day to increase the likelihood of seeing a moose. Carole, I am so sorry, as we saw four! As we started along the walkway a big bull moose, along with his family (cow and child), was strolling through the brook eating the reeds quite voraciously. 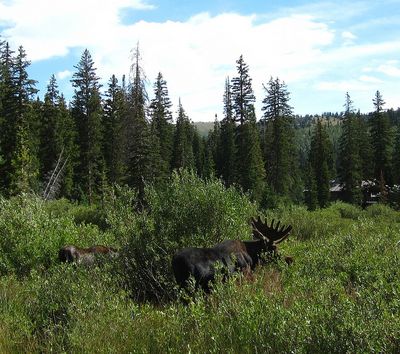 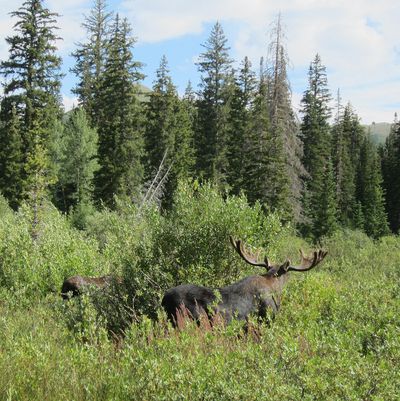 click to enlargen and you'll see the velvet covering his antlers
We could see another bull moose sitting in the grass  on the other side of the lake not quite ready to start his day. From our side of the lake we could see his large antlers move and a  small group of people watching, but we were unable to make it around before he stood up and walk away into the reeds. 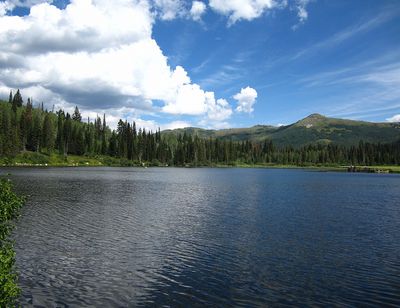 The day was exceptional and the sky particularly vivid, constantly changing, as clouds formed and moved on. My head was up staring at the formations for much of our walk, but not to the point I couldn't spot the many wildflowers we saw. 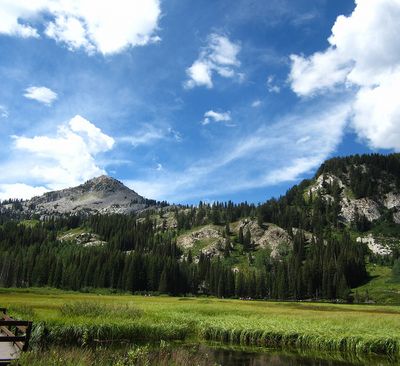 The sun shone on the reeds and grasses highlighting their hues and shades. Walking slowly, watching for wildflowers, and enjoying the breezes while we chatted made the day all the more enjoyable. 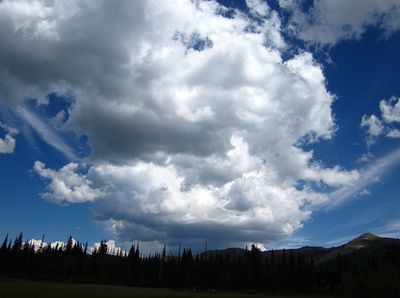 The clouds danced and changed, their shapes creating a constant entertainment of dark and light. A storm tried to brew, but it never did coalesce into more than a puff.

Chris had a wonderful day and enjoyed the lake so much she returned with her daughter later that day. She may be another convert to the beauty and peace of Silver Lake.

August 12th is a special day in my history, as it's my Mom's birthday. She would have been 83 today, a very young 83, I would guess, if she had not been felled by a brain tumor. She was quiet beautiful on her graduation day in 1948. The next year she married my Dad and 1 year after that, she had me. I remember her as a very lovely woman with no gile, a caring, giving person who always had a something delicous to share from her kitchen. Happy Birthday, Mom. It's hard to believe you've been gone for 24 years. I miss you more every day.

I can't give you a good reason for my disappearance, nor can I truly explain why I felt compelled to walk away, but I can say, I'm enjoying my life on this side of the screen. Well, saying it that way makes me feel a little selfish, but being in the now felt right. Today I feel like coming out of my shell and sharing some of the great things I've got going, although none of it is very exciting.

Guess what? You're right! The garden is growing! beans, beans, beans (and more beans coming), a few fabulous looking tomatoes are ready to harvest and more green potential hangs on the vines. 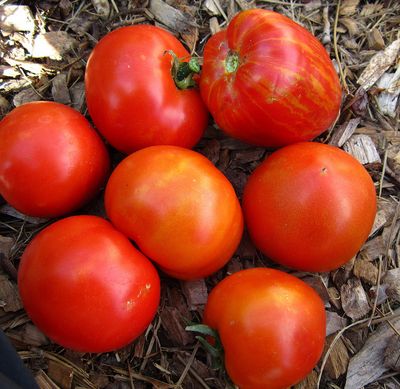 This year we expect to have our first crop of Brussel sprouts as the plants are looking healthy and full of buds. The fennel looks great, too, and my fingers are crossed we'll have more than the flowers to enjoy.

For the first time in a long time I've found an exercise program I love to do on a regular bases. I still take my morning walk, but it's not enough to build up the muscle strength I need to overcome back pain. I'm in love with pilates! My muscles are working and growing stronger each day. I feel when they're engaged and feel how they work to support me. You know that feeling when "this is it"? Well, this is my IT! 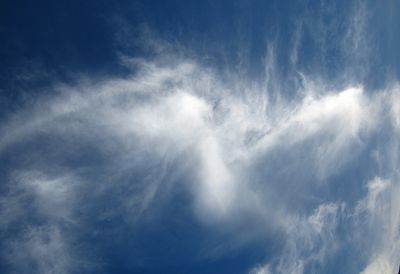 Between exercise class, garden time, reading and knitting time, cooking and cleaning time, well, who wants to spend "other" time in front of a computer? I need to leave a little time for cloud watching. Look! It's a dove!