While I knit the second front of Chicane, I'm dreaming about where to go once she's finished. At first, I thought looking ahead wasn't very process oriented as I always think of myself as a process knitter. However, isn't part of the process of knitting visualization and planning for a project? Precious knitting time could be lost if an idea hasn't been formulated and necessary supplies gathered. At least that's the story I've concocted, and I plan to stick with it (for now). 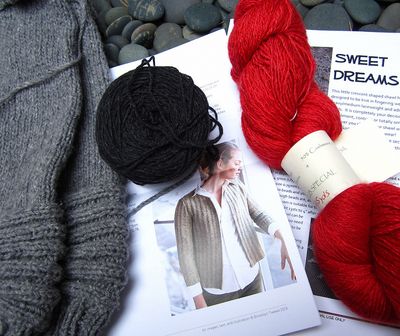 While I'm not one to abandon a project and keep around a UFO, I'm not feeling very kindly towards Quill. The border I have worked on forever and ever, and may be working on forever and ever more, has an error that may not be able to be fudged. Before facing the miles of frogging, or figuring out what the long term repercussions of ignoring the mistake will be, I've decided to move on and knit something bright and cheery.

Cookie's red cashmere/silk handspun is calling to me, and while I'm worried about the delicacy of the yarn, I'm compelled to cast on. I've decided on Sweet Dreams by Boo Knits and, hopefully, I won't chicken out. The next sweater project in my dreams is Clayton from BT Winter 13. I have a yarn in my stash that could be suitable, but a swatch will need to be knit, washed and blocked before any true decision is made. I may take time to cast on and begin that part of the process, as I want to be prepared to take the next step.

On another note, I'm ridiculously bummed that Google ran off and abandon Google Reader well before the announced date of demise. I was already in a state of grief over loosing my iGoogle page and seeing Reader die has left me with a real feeling of abandonment.Will Google be a nail in the coffin of blogs everywhere? Feeds can be exported and imported into other readers, but I'm not sure how many followers will bother. While I've tried Bloglovin' and Bloglines, I've settle on Feedly, which isn't perfect, but it is easier to organize my feeds than with the two other readers. I hope you find something that works for you and you'll still come by to read my blog.

I have already switched to Feedly so I will be reading your blog.

Bummer about Quill, hopefully you can get back on track at some point. But yay for new projects! I haven't had any problems with Google Reader yet but I think when I do make the switch it will be to The Old Reader as that seems to look most like Google Reader.

I think the peoplethat still read blogs will continue to do so Google Reader or no Google.

Lately the Google is doing all sorts of annoying stuff, did you notice the quality of theresults of searches they give, only the sites you know and visit are there - not very helpful I think.

I checked Feedly amd then Bloglovin but like you I prefer the Feedly.

I do appreciate that Feedly is continuously making improvements for those of us who've transitioned from Google Reader!

Can't wait to see a finished object out of that stunning red yarn.

I checked a few readers, and liked Feedly fairly well, but wasn't really sure how that would pan out because it is (or at least was) based on Google Reader behind the scenes. I'm sure they've had to figure something out, though. I actually ended up using The Old Reader. It seems more like Google Reader than any of the rest. It's not as pretty as Feedly, but it's also less complicated. I like the buttons to jump through the articles.

Wouldn't miss a chance to visit with you and the blog! Love the red - so bright, so cheery!

Wait, I'm confused. Google Reader is still working for me (although your feed has suddenly started showing up twice a day in it).

The red is very cheery yarn.

I get my blog feeds on Ravelry. Well, the ones for my Ravelry friends anyway. Are you sure Quill can't be fixed. Are you able to just frog the sections with the error and knit it back up. I've done that lots of times.

You've got some nice projects in store Margene! I've been using the Ravelry feed too. Actually I'm off to friend you now!

I just saw Brooklyn Tweed's sample of Clayton at the Seattle Vogue Knitting Live and it is a very lovely cardigan! It's not my favorite sweater in the collection, but then again I admire them all. I did buy some of his Loft to make a Guernsey Triangle and I'm seriously planning to buy a sweater's worth sometime this spring, for Ives. That sweater did not grab me until I saw and touched it at the show. His sample was knit by Larisa in SLC so maybe you saw it too?

I'm old fashioned and still click on bookmarked links to visit blogs every day. :) I don't use a reader. I hope you find something that makes you happy!

Oh my gosh, I had completely forgotten that they're killing Reader. Thanks for the reminder! I'd hate to miss one of your posts.

Margene, your ideas inspire! (And that RED! So marvelous!) I'm so sorry about Quill . . . but, like I say so often . . . life is too short to knit things that don't bring you joy. (I also think PLANNING is a huge part of the PROCESS!) I think Feedly has potential!

I have to admit that I've gotten away from blogs - reading and writing - for a while. I do miss them though and I keep trying to get back in the habit. I guess I'll try Feedly too but I'm bummed about losing Google Reader.

I can't waitto see you start Swwet Dreams. It's been in my favorites for a while and you always do a fabulous job with the knitting and the modeling. Inspiration is found right here.

I have never relied on feeders. I have my "favourites" and I sit down and read them with my coffee. That used to be a daily ritual but now with bloggers posting less frequently, I make it a 3 or 4/wk ritual. I have seen you through many years of posting, health issues and lots and lots of sweaters and shawls. Continued good health and keep posting!!!

Add me to the list of people who've already switched to Feedly and are right here with you!

coming to you via Feedly and I'm starting to feel a bit more comfortable there. I switched cold turkey a few weeks ago, and now I'm finding myself really liking the clean interface and it kept all my old folders, so I really didn't have anything to "do" to get going. loved the update on your knitting (except for the bad news on Quill...so sorry) and completely agree with Kym. Planning is a key step in any Process (whether you intend to work to a finished Product or not!) I'm really a mix of the two - some projects I knit for the Process and others for the Product...but I plan all of them (and swatch for most!)

The red is stronger than you think. I think you're giving Google way too much credit. Do you use fx? Because I really like the reader I'm using on fx. I hate how ugly feedly is. :?