Zeneedle...needleart as life
Home Archives Profile Subscribe
Suits Me
When You Can See the Air 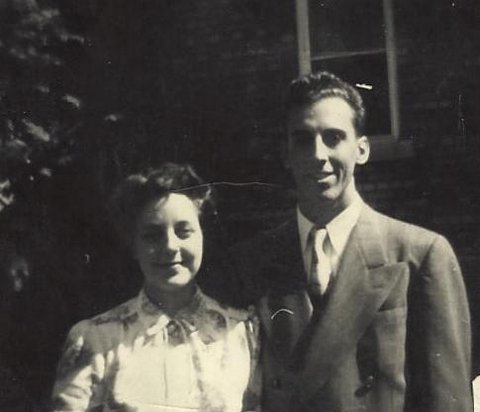 Mom and Dad (Mom once told me this was around the time they became engaged to be married.)

A few weeks ago, when the ToT post was a list of our favorite Christmas Cookies, I called my sister to see if she had Mom's recipe handy and could read it to me (I was in the office). She was just wrapping a package she intended to put in the post to us, which we found a fun coincidence. The second reason I'd called was to see if she could send my father's black photo album back to me, as it was filled (mostly) with pictures of my early childhood. 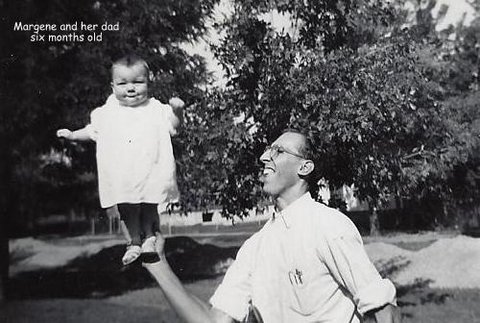 My Dad loved to upset my Mom, as she was afraid he'd drop me.

As we talked on the phone my sister checked her photo albums (very organized is she) and didn't find it there, but she did remember seeing it.  She thought Dad might still have it, or maybe one of our other sisters (I have many) had it. The last thing I wanted was for this album to go missing as my dad had taken so many pictures of my mom, his friends, and of me (his first born). 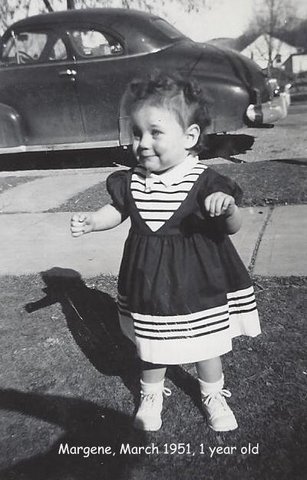 My first birthday! We still have the bonnet that went with my dress, which is red and white.

A few days later, my sister called and I could hear excitement in her voice. She'd been looking for a lost box of Christmas ornaments and run across a box with "family" written on the side. Inside was the photo album. I was SO relieved. We talked of ways of sharing the pictures and who should house it for the long haul (me!). She spent the first few days of 2013 scanning photos and sending a few to the family. She is making discs for everyone else, but she'll send the album to me! I can't wait to see this treasure and hold it in my hands again. I'll share it with you when it arrives!

Ah, my little brother was born in March, 1950. I totally get it...remember those years so well.

Oh, you were so cute!! Photo albums like that are priceless and I'm glad it will be coming to live with you.

Love the pics. There is great concentration in your Dad's face and in yours in that first pic. Love it! And, the birthday picture is precious. What a beautiful baby you were and I had a similar dress (must have been the era)in navy and white, but mine came with pearls;-D I am looking forward to more!!

What a treasure!! You were adorable. :)

What a treasure for you and your family. Most of my family photos from that time are on slides, therefore difficult to look at. As a Christmas present to my Mom, I had about 50 slides scanned to a cd and made into prints. My project for the coming year is to go through the slides and make up more sets.

What sweet pictures. I'm sure you'll enjoy flipping through the album.

You have reminded me of yet another New Year's goal--getting copies of old family photos! They are such a treasure--yours are wonderful, but then again every family's are very special.

I see your mother in you! What a treasure... that's my favorite kind.

That is the best! And your Dad must be the best too! Looking forward to seeing more!

These are amazing photos; I especially love the second one! I can picture you hugging the treasured album when it arrives. Thanks for sharing!

I have a cd of collected photos of my dad's family, including me and all my cousins. Of my mom's family, there are not so many, and they're still in paper and need to be converted to digital.

You're blessed that you have both!!

I have a picture of my dad holding me like that - it must have been a thing back then - I've never seen anyone of my generation hold a baby up like that. So glad the album was found, and that the pictures are being scanned.

What wonderful photos! You were such a little cutie. And I can definitely see the family resemblance to your mother.

Oh, you were (are!) adorable! I can really see that you take after your mother too.

Glenn spent a lot of time in the past year organizing his parents' slides and sending them to Scan Cafe, where they were placed on DVDs and also stored online. We put them on our home computer as well, and then made memory sticks with the files for his siblings. Nice memories.

These are WONDERFUL! I can totally see your mom in you. Still stylin' it with the red too, eh?

I love these pictures on so many levels! What a cute wee one you were!!!

I have always loved looking at old family pictures. I find great comfort in them.