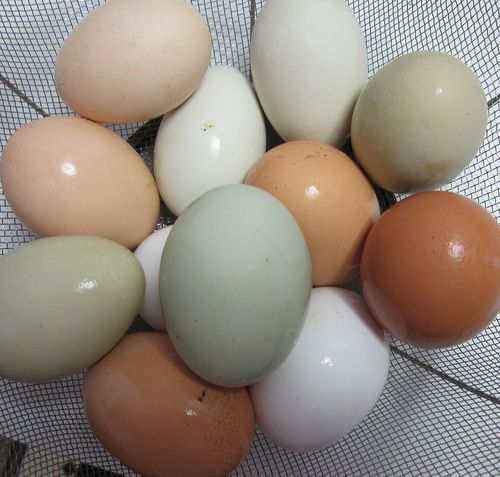 It was not my intention to let a few days pass without a post. It was my intention to do a Weekending post on Monday and, perhaps, a ToT on Tuesday, but, as it turns out, THAT road, you know the one I mean, the one your mother warmed you was paved with intentions, THAT road came up and hit me in the face. Intentions are not actions. Instead of letting the guilt for lack of action get to me the rest of the week, I decided to act, finally, on putting together a post. (The eggs are from a local farm and would have been my Weekending picture.)

I could give a bunch of excuses on why I haven't taken pictures, haven't knit enough, or formed any thoughts on the last few days, but it felt better to put energy into saying hi!, pushing forward, and posting.  I miss you all when I don't blog. So, to get on with it....

I have made progress on both Quill and Breckon. There are no pictures, as of yet, and when I can take pictures of said projects, I'll  share what progress has been made.  Both projects require a considerable investment in time, an investment of time far into the foreseeable future and, therefore, I have broken my unwritten rule by deciding to start a third* (shorter in term) project. I have also broken my own cardinal rule of no Christmas knitting. I know! Me! Christmas knitting! 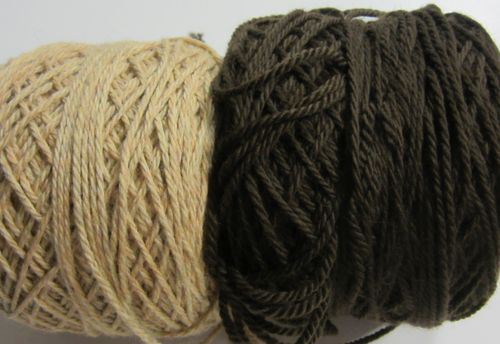 The idea came while at SnB. There is a small core group of us who cycle in and out the Sunday meetings and we were fortune to have every single one of us in attendance last Sunday. Monica (Monikita on Ravelry) was knitting a hat for her husband. She told us of her tradition to knit a hat each Christmas they'd been married. If I had started that tradition Smith would now have 32 hats!

As an aside, he's not a fan of hand-knitted items and the two sweaters (quite old yet barely worn), a pair of well worn (out) gloves, as well as, a couple of hats, has been (more than) enough. I made him two pairs of socks, but he does not love them and, sadly, has never worn them. He is not deserving of socks. BUT, he loves his hats, and when I suggested knitting a hat for Christmas, he was very pleased. Ok, I think I'll leave it there and report on the hat, and other knitting progress, soon...promise!

*Yes, you may (or may not) remember I have another project, but it has been abandon for now, hopefully not forever.

Smith just does not know what he is missing. At least a hat is some compromise on the issue.

If you had made him 32 hats he probably would have lost a bunch of them. Does that make you feel better? Have fun with your Christmas knitting!

Tom is the very same way about the hand knits! Hats . . . he loves! Everything else? Meh. :-) (My Leftie is taking a break, too. I love it and all, but I don't have time to give it the attention it needs!)

I have been a poor example if a knitting wife. At least you have given him these things and he has had time to choose not to wear them (the socks? Really?!). I haven't made any of these things for my husband. Yet I predict they would languish unloved in the closet and drawers. I don't think he would even wear a hat. I keep thinking he might wear a vest. Such a different climate here. Knit on and never look back with guilt. :)

Good luck with the hat! I am sure it will be beautiful and Smith will love it.

If you didn't knit, Smith would adore handknit socks. Murphy's Law;-P Can't wait to see the new hat!!!! And, I love hearing from you. It's like a little check in with friends.

Larry isn't big on hand-knit hats. He likes really dense hats, like ski hats. Too bad. I'm not going to make him a sweater every Christmas.

I've only intentionally knit Rusty some mukluks and he LOVED them, and then the dog chewed them up. Another pair is on the list... don't know if it'll be Christmas, though. I'll have an extra day if I make them for his birthday.
;)

I figured you were just recuperating from November! :)

Darlin', there is nothing wrong with being out having a life and enjoying yourself in place of blogging. We will come when you update and we don't require photos or massive updates.

I love the hat tradition. Then again, I've been cranking them out lately, so I may just love hats right now. ;^)

In my mind gifting Doug socks would be the ultimate knitter wife show of love. But, I know that guy well and they would sit in the drawer. Enjoy your "unintentional" ways!

It's better that you know what he will and won't use so you can channel your knitting energy into things he will wear!