Zeneedle...needleart as life
Home Archives Profile Subscribe
Knit Read Along
And A.... 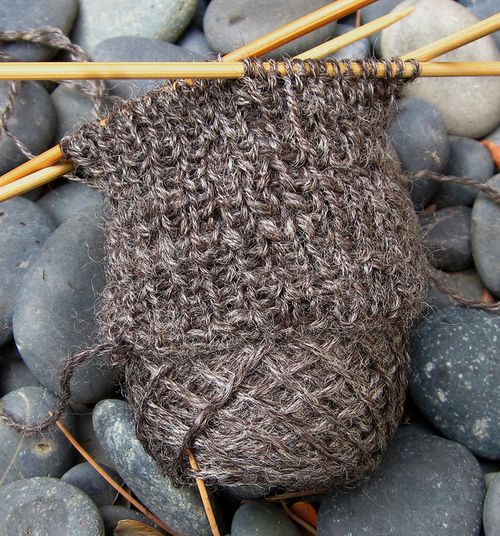 Sadly, there isn't much to report, other than I haven't shown more than a swatch before now. The yarn is a little inconsistent in grist, but I like the way it slides through my fingers, almost like silk. Switching from my usual method of English (aka as throwing) to Continental (aka picking) has not only made ribbing easier, it has evened out the stitches. Once the ribbing is finished I'll switch back to English. I have knit in both fashions for extended periods, but find throwing preferable. Switching mid-project isn't a good idea as my gauge changes, although it should be fine for the ribbing.

Because I taught myself to knit I did little more than grab onto the yarn with my whole hand. Lack of technique caused cramping and other repetitive motion issues. The fluid way a LYS owner knit (this is in the 1980s) attracted me, as did her constant encouragement to try Continental knitting.

However, after changing methods I still fought gauge issues. When I saw the way another teacher knit I  switched to English. I liked the way her hands moved and thought it would also help my gauge. Years later, I'm still fighting repetitive motion issues, but I've settled into throwing my yarn and using my dual handed talent when needed. Stretching, strengthening, and limiting time with the needles is the best way to knit.

My gauge changes when I switch to Continental, too. I can do it but I'm not as fast and I've never just set aside the time to learn to knit Continental better. Maybe I should just pick a project and stick with that style for the entire project. By the end I'd be able to use this method successfully, I bet.

You are talented if you can knit both ways. My left hand just won't cooperate for picking...

I learned to knit Continental years ago when I took a class on two-handed Fair Isle. Like Carole, I can do it . . . just not as fast, and like you, I just prefer to knit English. (I just have a better rhythm.) It's handy to be able to switch back and forth when needed, though! (I love the color of the yarn for your sweater.)

Good lord. I knit the same way, except that I prefer picking in long stretches of knitting and then I throw for long stretches of purling. My gauge is more consistent when I throw, but I love the rhythm of the Continental stitch. Oh, and the sleeve is going nicely. I love that yarn!

Thanks to an article in Interweave Knits once, I determined that my knitting style is Scottish -- well, well, what do you know?! My mother taught me, then I re-learned in high school home ec., and then I re-taught myself several years later... all variations of throwing. Two of my sisters learned Continental and we'd always marvel at each other's style... HOW CAN YOU KNIT THAT WAY? I've knit Continental for a total of about 5 minutes. Meanwhile, I still grab onto the yarn with my whole hand and tension with my palm. Just the thought of winding yarn over and under my fingers to tension makes my fingers go numb. I have also fought repetitive motion issues, though they're much improved with my better overall health (and less inflammation).

It's a good plan. Always nice to have options!

I learned to knit with a nice Jewish lady whose origins were Eastern European, so I knit for years without knowing that I was knitting continental or knowing what English knitting is. I finally learned to throw and enjoy using it in colorwork but prefer continental for most things. I have found in teaching others to knit that throwing seems more intuitive for many folks and they catch on to it more quickly.

I've been reading your blog forever, and one of the first things that struck me was the recommendation of stretching exercises. I have never forgotten that, and I always stretch before, during, and after my knitting/spinning/weaving. I believe you have given me many more years of comfortable fiber-craft, without even knowing it. Thank you, Margene!!

I'm suffering from a flare up of carpal tunnel and tendonitis, caused, I think, by spinning too long at one sitting... I'm going in for acupuncture today.

I knit continental, and purl weird. I find that my purl stitches are slightly tighter than my knit stitches (reverse of "normal"), but since I mostly knit in the round, it's not a problem.

I like the yarn - looks like some romney that I have spun, sitting in a basket waiting for me to do something with it!!

It's sad when limiting knitting time becomes something we have to do for our bodies, isn't it?

You swing both ways. Never knew that. ;^)