Friday at the Lake

It all started here... 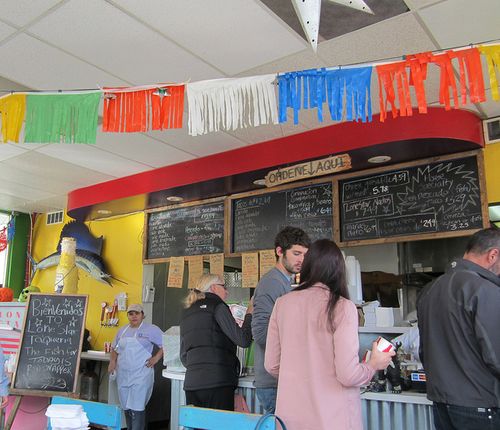 Smith mentioned lunch at Lone Star Taqueria followed by a mountain adventure. We knew Silver Lake would be covered with snow, but since the valley snow had melted so quickly, curiosity drove us to see how the mountains were faring. 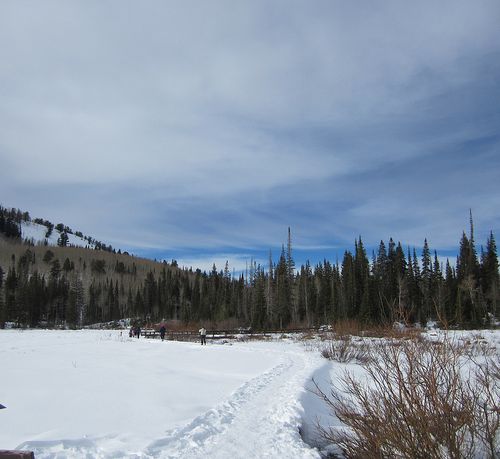 After satisfying our hunger we took to the mountain road and wound our way up. The slopes of both ski resorts, Brighton and Solitude, were speckled with skiers, but it was easy to see the snow was not at its best. Usually, when we visit Silver Lake in winter, we walk over several feet of snow just to catch a glimpse of the lake from afar. This year we only had to negotiate a couple of feet at the entrance before we were on the trail.  Other sightseer's were walking all the way around the lake, so we decided to give it a go. 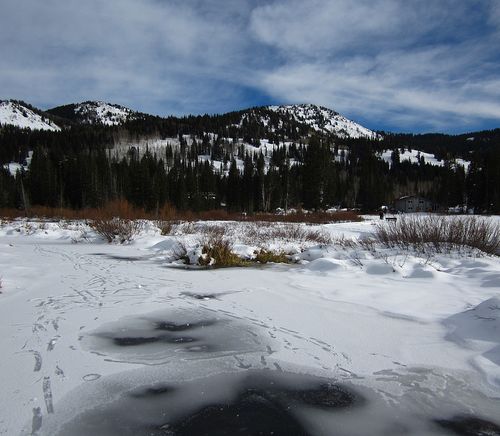 At the bridge we could see the layer of ice had once been thick enough to hold a person, but it certainly was no longer. The ice was melting into the dark water and in the warming weather it would continue to do so. 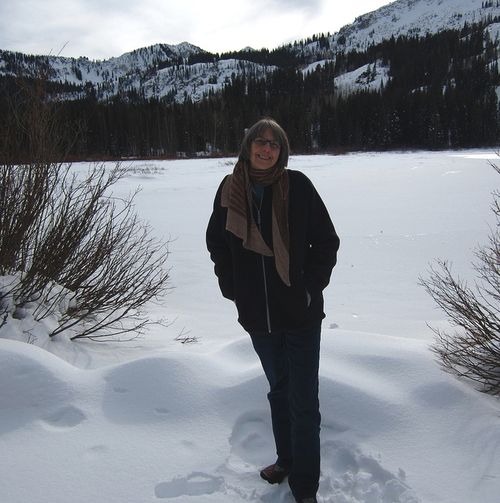 Following the snowy trail, packed down by the feet of many hikers, we came to a favorite spot where the water usually reflects the mountain, but there was no reflection, and the skies to the south were gray. 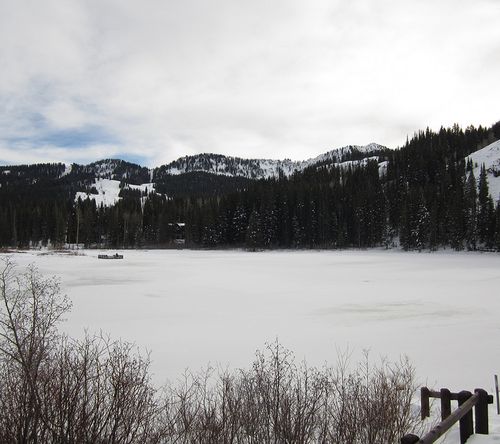 The silence around the lake was broken only by the crunch of slushy snow beneath our feet and the chatter of one lone squirrel, as he sounded his distaste at being disturbed. When we stopped to view the lake, silence reigned. 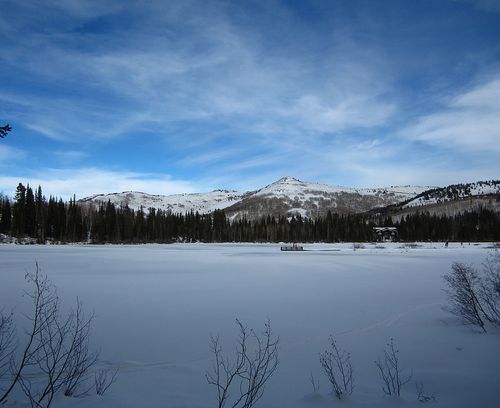 At the top of the trail we looked down into the frozen lake and saw the blue sky was starting to win the battle against the gray clouds. The lake will very likely remain frozen, even during a week of warming weather, and it will be spring before we have the chance to walk the trail again.

I can't decide what makes me most jealous: lunch at Lone Star, a visit to Silver Lake, or all that snow!

I'm with Carole! :-) I love seeing Silver Lake covered with all that snow. Such a beautiful spot . . . in every season.

What a lovely walk. I hope you get all your snow.

Guess some snow is better than NO snow, but geez...the brush isn't even covered.....pray for snow :D

Beautiful! Glad you got another chance to enjoy it before the deep, deep snow sets in.

Well! That was just lovely! Thanks again for your book recommendations! I have enjoyed the ones I have tried.

Oh, I love it when the sky starts to blue! Gorgeous! Thanks for the hike-along.
;)

I love when you post frequently as you have been doing. Thanks for the lovely pictures too.

Sad about the lack of snow. I was hoping to snow shoe this weekend.

What a wonderful way to spend an afternoon. Still think there should have been snow angels, though...

I'm ok with looking at pictures of snow. :)