Between Blue and Gray 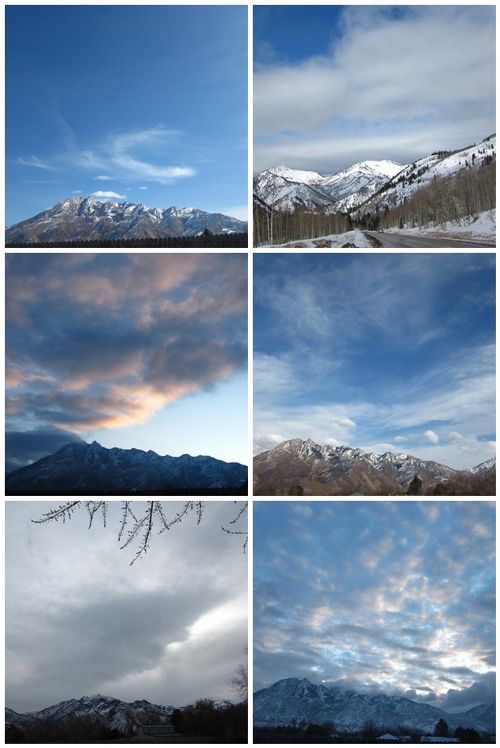 (Pictures of sky and scarf are through February 18th)

Much of February has been gray, but as you can see from the pictures, I have a tendency to photograph only the blue skies or the interesting skies, and not the plain, boring, flat gray. Some mornings the clouds catch dawns early light and, sometimes, at the end of day, the sky will clear. However, for the most part, the skies have been gray. 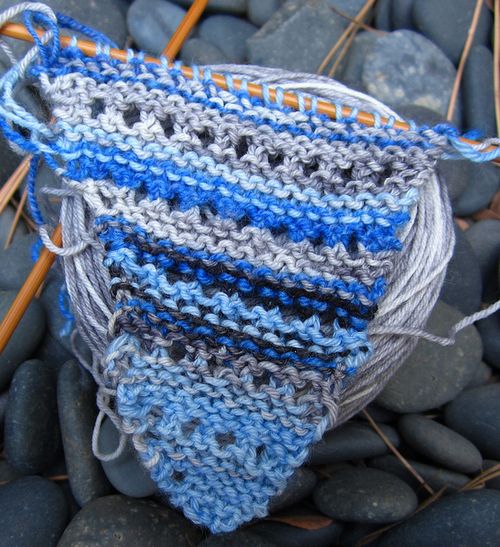 Knitting this scarf is a challenge because of the variable nature of the sky. I've always loved that ever-changing nature, but now, it means I have to knit ONE row of blue and ONE row of gray.   Knitting the sky brings its constancy of change into focus and I no longer look at the sky unencumbered. The scarf has had a tendency to drag me down, as in, "oh no, I'll have to weave in more ends!".  I am ever hopeful there will be solid streaks of blue in the near future.

Now, my friends, if you look closely you'll see, except for the last few rows, all of the ends have been woven in. The scarf is far less "hairy" and I plan to keep the ends under control, just to keep the sky from driving me crazy.

No ends showing will make all those with OCD feel much calmer -- lookin' good.

Oh, Sweetie. Just wait. The sky will be an endlessly hazy blue/gray this July and you'll be knitting blue/gray all month long;-0 It is so pretty, though, and it will be such a neat reminder of "your" skies.

That is an excellent plan to keep this lovely project under control and enjoyable too.

Weaving in ends as you go is smart! :)

I think the scarf looks cool.

I like it! I agree that weaving in ends as you go make it a more pleasant project for you to do. Pretty and pleasant.

You could take one photo of the plain gray sky and just copy it for each similar day. Who would know?

I'm ready for some blue skies, too.

Margene, I love your cloud photos (clouds are so expressive)! Incredible that your knitting mirrors the colours in the skies. And a huge congrats on the ends control - I have done that - occasionally - and it definitely makes a difference (not sure why I don't always do it) and is a good practice for sure. Can't wait to see your finished scarf.

Good for you for all that weaving! So much better than leaving it all for the end.
I love watching your scarf grow. Wishing you blue skies. (And fewer ends...)

Weaving those ends in as you go is the only way to manage this one. I never tire of seeing your sky.

Smart to do it as you go. Otherwise, you would crazi(er). All blue is coming soon.

Process, process, process! It has been an interesting and part-time project. I tend to hurry through, and it is good for me to not be in control.

Kudos for getting those ends under control. I'm looking forward a long stretch of blue myself, though we've had a record number of blue days this February - I truly shouldn't complain. I suppose I'm getting spoiled. Of course, Boise blue has nothing on that Utah blue!

The knitting is lovely, but OH those skies!!! Nothing can compete, of course.
(((hugs)))

I love it! You're creating a journal of the sky!

When you are finished, this scarf will be so dear to your heart because it represents your amazing Utah sky......so lovely!