Zeneedle...needleart as life
Home Archives Profile Subscribe
Where Does it Go?
Garden Master

For the next few days the cold is taking hold. The skies are blue, but the "i-word", is being bandied about and from my window the view is somewhat hazy. This is not my favorite winter condition...far from it.

The carport garden Smith built never quite got off the ground, as the seeds were sown a little late in the year. They didn't germinate and grow as expected due to the cold October we had. A few baby leaves of lettuce and kale have been thrown into salads, but over all the ground awaits the returned of the sun (as do I).

While I was checking out the very small, and now frozen, radish plants, Smith decided to snap a photo of my finally finished, Mondo Cable Pulli. I let this project go dormant a couple of times during the process and wasn't sure I'd ever bother to tie up loose ends. However, I'm glad I did, as it is happily off the needles, and on my body.

I made a few modifications, such as limiting the "trapeze" effect of the body and lengthening both body and sleeves. Short rows were added to the back right under the armscye. This little trick keeps the back from riding up unflatteringly. Other "mods" were more mistakes than true mods and I don't, usually, confess my knitting errors. 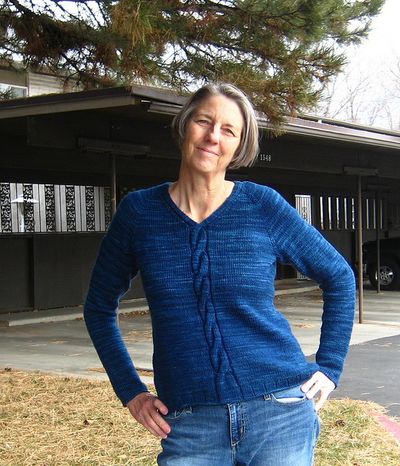 Bonne Marie's pattern has some very cool techniques, such as the way she finishes the neck band. The trick is simple elegance and it brought a smile to my face, as it was just so creative.  At first I thought it would be hard to make the neck band look smooth, like it was one piece, but by following the instructions the neck band looks lovely.

This sweater also reminded me (one more time) that I'm not a fan of raglans. The shoulders feel too snug, simply not as comfortable as set-in sleeves...I think I've knit my last. I'm also not a fan of worsted weight pullovers, another thing to be wary of in the future. The yarn wasn't a favorite (maybe it's the pullover problem), but the color is exceptional.

So, back to the garden...we're dreaming and planning what we'd like to plant in the box come March. Salad lettuces, herbs, and greens we can cut and eat immediately will be mostly likely.  Lists are being made in anticipation of ordering seeds late next month. We know the season of snow (although not much has arrived) will give way to the growing season, eventually.

The blue is gorgeous, and the sweater looks like it fits you perfectly! Doesn't look snug at all, but I know what you mean about raglan vs. set-in. It's beautiful!

Even if it's not a favorite, I think it looks really nice on you -- and the blue is such a fantastic color!

It sure looks great. And the color is fantastic! I can't wait to see Smith's garden grow next summer.

No one knows how to fit a sweater better than you....I swear I don't know how you do it.

I made the Mondo Cable Vest -- and I really like it (although wish I'd thought to "mod" the trapeze shape myself!). You're so right about the clever neckline! I tend to . . . not like pullovers of any type. Give me a cardigan any day!

Lovely blue! Enjoy dreaming and scheming about your spring garden. :-)

I should have made some of those mods on mine as it does have a "trapeze" effect that isn't very flattering. Yours looks great and I love that color on you.

Don't care. It looks fabulous on you. Just try to wear it when free movement isn't an issue;-P I know. When exactly is that? It just looks so lovely on you. Hope the "i" stays away. It was a tad slick this a.m. here in Middle Earth and I almost fell, twice. Yuckers. It is getting close to garden order time, isn't it? Happy Hump Day!!!!

Looks wonderful on, though I know what you mean about raglans, and particularly about worsted weight pullovers! Super color too :^)

The color looks wonderful on you. This is the anti- i-word sweater! We're looking at the Seed Savers catalog right now as well. We always have such big plans. I am determined to get potatoes in the ground this spring!

It's such an amazing blue, and it looks wonderful on you!!

Just wait til the seed catalogs start rolling in a couple of weeks. :D

It does look nice in the photos, but I totally get what you're saying. Mine is going in the donation box.

the sweater looks great! freezing temps + NO snow = garden death!
i sure hope the "i" word stays at bay. of course if not, head UP↑

In spite of everything the pullover looks great!

Even if you don't love it....it looks fantastic on you!!

The sweater is a sweetie, it doesn't look like it's snug at all. Gorgeous colour! So there's also a vest? hmmmm. I also understand about the worsted weight for sweaters, just makes them feel heavy.

Beautiful color and flattering fit... hope you go to it on the coldest days.

It is a beautiful sweater...and I appreciate all of your comments about it. I'm going to begin working on sweaters for myself soon, and it helps to read about others talking fit and what works for them.

It's beautiful, even if you don't love it. Clearly, it loves you!
We start planning next year's garden before we even finish this year's garden...

Agree about the color, it is really stunning and vibrant. Cool neckline, too.

Oh darn, and I was going to make a career of raglans. better to know now than then. Nevertheless it looks fabulous on you and the color is absolutely wonderful.

Beautiful sweater all the same! It looks wonderful on you.