Saturday afternoon the sun decided to come out of hiding and show her beaming face. Smith was in the garden, so I ran over to see if he could help with a Henley photo shoot, but, as you can see, I could not get the hang of it.

The garden just wasn't the right spot and I could tell Smith was itching to get back to work in the dirt. dang  What to do?

Later in the day I mentioned the photo shoot fail to Suzy and she offered to come right over and take charge.  Maybe two grrls together could figure out a good way to show off my exquisite Henley.

We set off to find a lovely spot for our colaborative effort and my first thought was to go swinging. (You never know what will work.) Suzy tried and tried, however, as you can see, that idea was a fail, too.

Suzy then decided a pretty red tulip would help the situation but, have you ever smelled a tulip!? We ended up laughing more than photographing. (I tried to discard the tulip behind a forsythia bush but, sigh, Suzy insisted I keep it.) 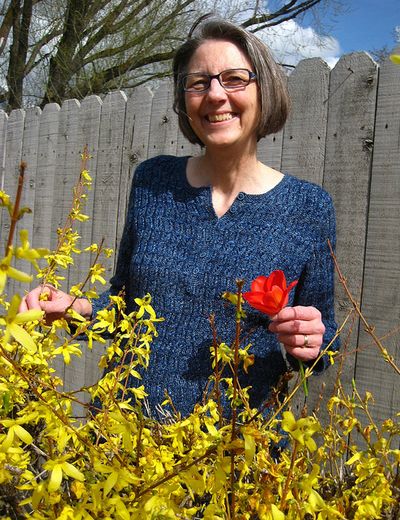 Suzy also told me over and over to turn around.  I was getting a complex, but she said the back of Henley was amazing, as it showed off Kim's fabulous dye work. The only place I alternated skeins was the front (and I'm not sure I needed to). That should tell you what a master Kim is with the dyes. 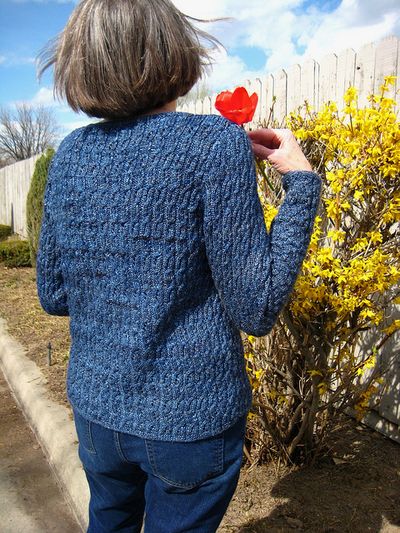 Why I had so much trouble knitting this sweater, and trying to get a photo of the finished project, is a mystery but, for some reason, it has been a trial.  The yarn is wonderful, the pattern perfectly written, but they almost did me in. Seriously, Henley is my new favorite sweater. The touch of the fabric against my skin is silky soft and the fit is just as I hoped it would be; not snug, more like a favorite T-shirt and easy to wear. I made the body and sleeves longer, omitted the waist shaping and found the perfect buttons. 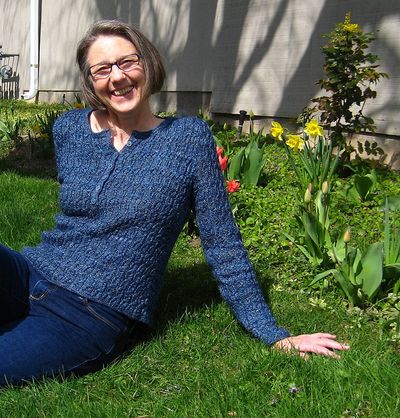 My job is done.  A great big Thank You goes to Kim and Anne, who make a fine duo, and to Smith and Suzy, who had to put up with me.  Now, it's onto wearing and loving my Henley.  Raveled here

It was worth all the trouble. It is drop-dead gorgeous!

Such lovely blueness! This is a stunning pattern that shows off the yarn beautifully. Great knitting!

So beautiful! You and the sweater and of course, the red tulip. I love the pic with you, sweater, fence, forsythia and red tulip!

I think you and Suzy both did a great job! What a fabulous sweater, and I especially love that last picture.

Adorable pics. Love the Henley. It is beautiful on you and beautiful just to look at. It was worth it, grrl!!!!

It's stunning on you! Simply gorgeous.

And look! You have spring!!

Too much fun! That is one gorgeous Henley -- from all sides!

This sweater is wonderful. Such a beutiful pattern and wonderful yarn selection. Great photos, you look so happy.

That looks great on you, and what a lovely representation of spring!

It's the perfect sweater, Margene! I love the photos, too. Wear it well!

I love you in this sweater!!!

It looks perfect! I love that first set of pictures, haha.

It looks great on you. Congratulations!

Well, Henley looks great... and so do you! That smile says HAPPY and SPRING more than anything!

Hey! you did it! it's fantastic and judging by your smile, it must feel divine!

Love this post, and the sweater - lovely job Margene!

It's a perfect fit - lovely and flattering!

LOVE your smile. :) Oh, and what a gorgeous sweater, too!

I think the photo shoots were a SUCCESS! You look like you're having a blast. More and more, I think waist shaping was overrated. I think the sweaters looks better (usually) without it. I think waist shaping came about after the boat-size sweaters from the '80s and early '90s. We were looking for ways to make the sweaters NOT BOATS. All we had to do was make the WHOLE thing smaller, heh.

It really is a perfect sweater. And your photo shoots must have been a blast!

The sweater is such a beautiful color and looks wonderful on you. Enjoy wearing it.

I love ALL the photos! and Suzy was spot on with you keeping hold of the tulip! Beautiful sweater, Margene, and I'm with Norma!!! (re: most shaping.. it just doesn't need to happen all the time) :^)

Great job! It looks amazing on you! Love the hilarity of the photo shoot.

It's a great looking sweater! I'm enjoying my first project with Kim's great work and it couldn't be better. Goofiness at photoshoots is often the best - the fun shines through!