We needed a quick dinner, something nutritious, flavorful and extra fast, as we both had meetings last night. Smith suggested pizza because Udi's GF Pizza Crusts are always in the freezer. (They are the best!)

In order get an extra helping of veggies I decided to try Brussels sprouts pizza.  I caramelized Utah Spanish sweet onions and, just before they were done, threw in thinly sliced Brussels sprouts. (Next time I'll throw in a red chili pepper for extra flavor, a touch of heat, and color.) 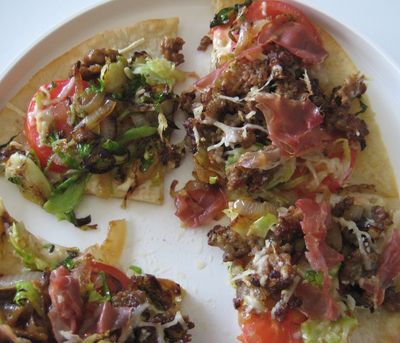 The first layer on the crust was mozzarella cheese (fake for me), then sliced Roma tomatoes, the onion/Brussels sprouts mixture, and Smith's favorite Italian sausage. We decided to use up the last of the prosciutto and topped it all with sprinkle of Parmesan cheese.  We liberally sprinkled red pepper flakes on each slice as we ate. It was a winner and we'll do it again with a few extra additions for flavor.

It looks DELICIOUS! No sauce, eh? Maybe we'll experiment with that next time we make pizza. Love your veggie combo.

More than ever lately, I just can't seem to get ENOUGH veggies!!! Yum, this looks great -- simple and satisfying.

Mmmmm, I think we'll be having pizza tonight!

I wouldn't have thought of brussels sprouts on pizza... Looks wonderful!
(When I'm in a big hurry for supper, I usually make quesadillas. Is there such a thing as GF tortillas?)

Looks really yummy. I have become quite a pizza snob and now prefer to make my own. They taste better and I can add whatever I want to them.

So that's where the Brussels sprouts go! They are the last thing I'd think to put on my pizza, right after ice cream-----but your combo sound pretty good.

Love those pizza crusts!!! That looks and sounds delicious.

Looks good! Try sprinkling with chili oil before you back it. I like that better than adding peppers or pepper flakes.

Hey, that's a great way to hide veggies! I might try that on the next pizza I make and see if the teenage daughter notices. She'll eat anything with prosciutto on it.

That looks delicious! Nice way to get your veggies in.

Sounds delicious. I would have never thought of using brussel sprouts like that.

I'd eat some RIGHT NOW.

Looks really yummy...except for those brussel sprouts...eek...whenever I see them, I have "Invasion of the Body Snatchers" flashbacks. LOL!

It sounds so good! DH and I may have to do something similar - his with fake meat and mine with the real deal :-)

Yum! Pleasing to the eye and palate.

Looks yummers!!!!! I haven't seen those yet, but I don't get over to Whole Foods very often, either;-P

I've not tried Udi's pizza crusts. I really like Kinnikinnick's. What mozzarella do you use?

We picked up a bottle of Kirkland already mixed margaritas. I could find nothing on the bottle listing malt, so I didn't think twice. I was not a happy camper the next day. Beware. Your pizza looks fantastic!