Zeneedle...needleart as life
Home Archives Profile Subscribe
Working For Space
There Must be Something in the Air

Don't Tell Me It's Over!

A couple of people have been knitting up a sock storm. (Look at the beautiful socks Hillary knit for CookieA's new book!)  My goal, for the month of October, was to finish the Mystery Sock

and knit the second Monkey sock of an abandon pair.  October ain't over, right? The Monkey sock has had a few issues.  For the first pair the color spiraled nicely up the leg and continued down the foot.  The second sock, well, it had ideas of its own and it took to pooling, flashing and doing anything else it liked. Cheryl said it looks as if bleach had been thrown on it, but I think it looks more like it threw up all over itself. Feh.  Since the goal is to finish and I didn't really love the pair of socks all that muchanyway and, because a sock is usually hiding beneath a pant leg and, this is as close as I get to living dangerously, I've continued on. 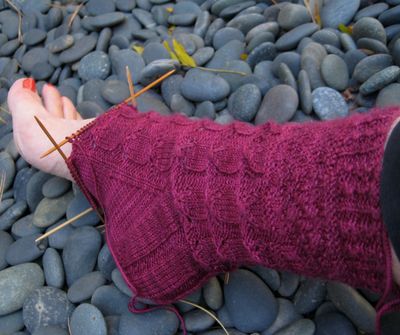 The Mystery sock has been better behaved but this yarn is pretty tame by comparison.  The biggest problem here is lack of time, oh and, a distraction here and there, plus my hands may be old enough that tiny needles can only be handled for short bursts of time.  Hey, I'm farther along than I thought! 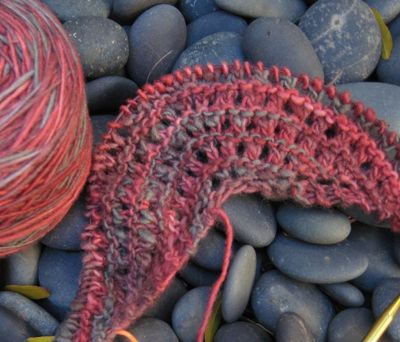 The distraction?  I might have started a (yet another) project, one that has grabbed my fancy.  The project is Susan's Fog Lifter

in the beautiful and rustic, Plain & Fancy Sport. This yarn came back with me from the last Estes Wool Festival I attended in 2007. (Can it really be that long ago?)

I'm working on the gusset decreases of sock 2 of the mystery socks. I'd really like to get these done by the end of this weekend but I've got a lot to do for our Halloween party so I'm not sure if that will happen.

I am woefully behind on Clue # 4. I woke up to the last clue being up and most of Europe having finished theirs-lol. I may pick them up again today if I can get a pocket of uninterrupted time where I can concentrate on just it. Quite the flashy Monkey and I'm liking the new Fog Lifter.

I just can't get into knitting socks anymore! I used to do it all the time. . . If I were to knit socks, though, I'd definitely want to knit them in that gorgeous yarn you're using for the Mystery sock. I love that color!

Turns out I had a little Mittoberfest over here -- a pair of mittens in Trekking... sort of like a sock, but with a gusset & thumb instead of a heel! Ends woven in and everything!

A great color for the project!

Oh, I like how the Plain & Fancy looks in that pattern. Your Fog Lifter will be great!

I have some Plain and Fancy Sport from a 2007 fiber festival as well. Only one skein though, but it has never found a project. And in a couple weeks I'm going back to the same event. Maybe I'll shop with a better plan this time?

I love the idea of pooling socks as living dangerously! Keep at it, I bet you can finish them before Monday!

October is not over, and if you have LOTS of knitting time between now and Sunday, you just might make it. If you can sty away from the enticing beautiful shawl!

I've learned not to bother setting knitting goals for myself, since I invariably end up breaking them!

Still, I can see how that distraction might get you.

Wow! They all look beautiful. Each color is so inviting to knit. I can see why you are in a quandry. I am living in baby blanket-land, longing for a sock to come along and take whisk me away!

I ordered the new CookieA book within miliseconds of reading your post. This weekend you will be knitting socks, and I will be drooling over them. And I love Fog Lifter and have been resisting it until I finish another shawl, but I can feel the resolve weakening. Pat yourself on the back for serious enabling.

You have plenty of time knitting time left in this month. Just ignore the laundry until Monday. ;^)

sounds like a bit of good knitting has been going on where you are.
The blue bleh socks might become favorites, because you know that monkey pattern is comfortable, and they will go nicely with jeans.. who care if they match ;-)

I love the Mystery sock! It's going to be beautiful. The fog lifter looks like just the thing you need. I love that yarn! Happy Friday!!

Do love the vomit concept. Yes, under pant legs and in shoes. I rely on that more than occasionally, too. Foglifter..all time favorite, I think.

When one sock wears out, I am going to wear it with another that has worn out. And not care about the match. So pooling vs nonpooling becomes small potatoes in the lack of match school.

Loving the Foglifter so far. I'm always amazed at how lovely colored yarns can turn bad on you when you start knitting a sock. But, but, but...you looked so NICE on the skein... LOL!

Not wishing to sound too "Julie Andrews" but you must have confidence in confidence alone! And even if you don't make it by this evening at least you'll eventually have two pairs of socks, right?

I love the Plain and Fancy and wish I could easily get more of that yarn... maybe I will use the one skein I have for a smallish shawl as you have inspired me. I love the descriptions you gave for your misbehaving sock, but since there's also the wearing, and the warmth of feet encased in wool, I think it's definitely worth getting excited about being so close to done!

My own socks are slogging along right now. I just can't seem to be interested in them!

I'm so far behind on my blog reading that I just saw this. Thanks for the kind words about my socks!