Zeneedle...needleart as life
Home Archives Profile Subscribe
Flash Back
Stepping Out of the Box

You would think I didn't know any better. I heard the voice in my head over and over, and still I forged on even though I was (fairly) sure there was a problem. Yes, problems are best solved before they become actual problems and but, apparently, there is difficulty in facing the music.  It appears I am in good company. 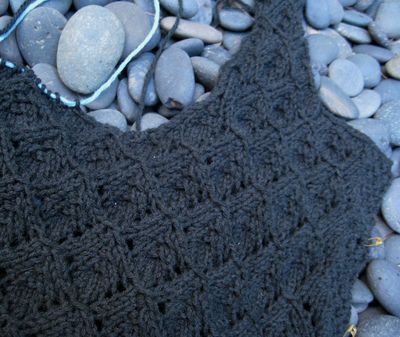 There is no way, on this green earth, my Que Sera is going to fit, as this fabric cannot be stretched into a larger size, at least not as large as I need. It's been knit too tightly, the needle  size at least one, if not two sizes, too small. Added to that, out of eight skeins I've only used three, another sign the gauge was way off.   BTW, the gauge swatch was spot on…the sweater? Not even close. I had a feeling, and I ignored it. Swatches lie. I should have measured as I knit.  I often do, but denial, my age old nemesis, is alive and well.

It's not very often I find a cotton summer sweater I like as much as Que Sera and there may be a search for a more suitable yarn.  Cotton Fleece is too light in weight. I'm not heartbroken, but I do feel foolish. If the temperatures were heading up, instead of down, I'd be frogging and reknitting on the spot, but this project will take a break until next spring.

I think the sweater is aptly named!

How true!
You know, you're not the first this has happened to and you won't be the last! You are in good company!

HATE it when that happens!

Oh gah! What a tough pill to swallow. It is what it is.

I just hate when that happens. I tend to float down the river of denial quite often, too. At least you didn't finish the sweater;-D

And what a quick knit it will be when you do get back to it. You already know so much about this pretty sweater. I hope your next project provides you with a more honest swatch!

It's often true that we don't listen to that little voice telling us the knitting isn't heading in the right direction. I know you will find a great yarn for this next spring. Tell us what you are knitting instead!

It happens, eh? and seriously, the way time seems to be flying/(rocketing!) by, it'll be Spring before we know it. :^D

This seems to happen to even the most "expert" and experience knitters I can think of. You are definitely in good company. It is disappointing, though.

The pattern is just beautiful and one day you'll have one, even if it's not as soon as you'd like.

I finished the shawl last night. I had evidently forgotten to do a couple of the k2tog's from the body stitches, because I figured out (with 6 repeats left), that I was going to have 5 stitches left over.

Larry asked what I was going to do about it. I said I was just going to sneak them in. When he asked if it would make a difference, I said "Probably not - and if it does, I'll just take it out and redo it. It's only knitting. You can fix your mistakes." I was proud of myself for finally getting to that attitude.

Of course, I wouldn't have had to frog it completely. That still sucks.

I hate when that happens. And a little time out can be very helpful.

Crappers! I hate that. Maybe it will be better in the spring. ;^)

Grr! I am famous for saying "it will work out in the blocking" and all too often I have to eat my words and rip my knitting. Still, come spring you'll have a beautiful sweater ahead of you!

Rats! It is pretty, though.

Oh dear. Chalk it up to (more) experience?

Bummer that it didn't work out. I really do like the way it looked in that yarn.

I hate it when that happens... in my case it's more likely to be too loose/big, since my tension tends towards the looser side.

As sorry as I am that you've hit a massive knitting snag....I'm glad to know that I'm not the only one!

As Jane pointed out, it really is aptly named.
When this happens to me (and it does), I declare the knitting a super-size swatch. Makes it easier to rip it out...

Oh nooooooo! Yes, it needs to rest till spring. There are other, more forgiving projects in the pipeline to soothe you. But don't feel too bad...I started a cowl earlier this week and nine rows in realized I'd twisted my join. In 30+ years of knitting, this is the first time I've made that mistake. I took it as an omen to start another project I'm dying to get moving on and let that one rest. :-)