Setting off on TTL mini-marathon sounded like a wonderful idea, as Que Sera and Hamamelis have been patiently waiting their turn in the queue. With the hope of smooth roads ahead, I picked up where I'd left off, but (and this is a big but) without carefully rereading or paying attention to the pattern. You'd think I'd learn, but apparently, I'm a slow to understand. 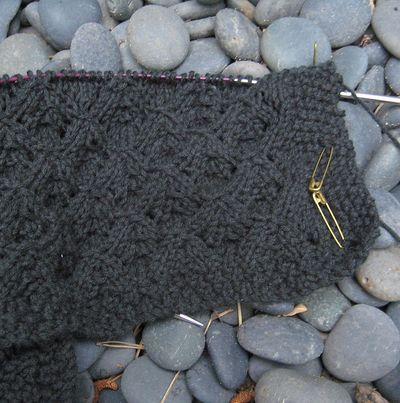 There were little whispers, the niggling little voices, telling me something might be wrong. However, I knit on and on, happily in my stupor, mindlessly making progress. (ha!) Then realization hit and it was if I'd been shaken from a dream...Que Sera was wrong, all wrong.  Major damage had been done; a big mistake, one that could not be ignored, made it necessary to frog six inches of knitting. One can not change Double Moss stitch into Seed stitch and be happy. Good knitting just doesn't work that way.

Instead of letting the error be, or allowing it to do me in, I rewound the yarn and, with redoubled effort, started again (heavy sigh), this time paying careful attention to the written pattern. 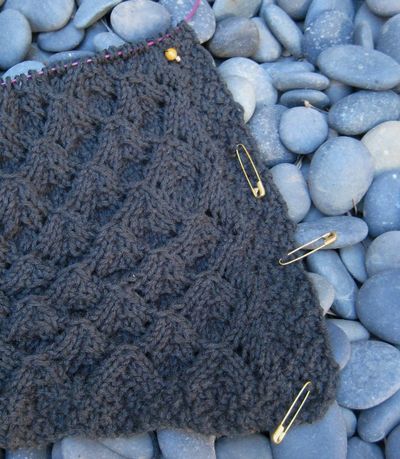 And so the process goes.  Cotton Fleece has held up well to my shenanigans. The (reknit) fabric is as good as new and I'm rather excited about wearing Que Sera…down the road...when she's finished...you know? This may not be a quickie knit, but I'm staying focused and I will be a better, more conscientious, knitter from here on out.

Great recovery from the rip and re-knit!

That color is delicious.

I say that to myself - the part about paying more attention - every single time I knit something. I suppose I am improving, but oh, soooooooooooo slowly!

It's gonna be such a pretty knit!

It'll be well worth it when it's done tho - another great pattern from Kirsten!

Or, at least until next time. I will not hold you to constant perfection. Too hard. I do love Que Sera. The color is fantastic!!!

I'm knitting that sweater for Hannah and the double moss is tricky, I agree! It's on hold now while I focus on a shawl for a bride who is getting married in just 3 weeks, which is fine except that when I'm ready to work on it again Hannah will be away at school and not easily available for measurements!

I'm in a similar state with my current knit. I'm ripping back 4" . . . unfortunately, at this point. . . that's the whole project! I'm starting over. That niggling voice. I need to listen earlier!

Que Sera is going to be beautiful! The color is fabulous. It'll be so worth the trouble!

Oh, I hate when I do that!! Glad you're back on track.

Heh, we live and learn, we knit and learn.. to always try to stay in tune to the inner voice ;^).. funny how it always seems to know, eh?

Ah, so that was the reason for the reknit! Sigh. It will be much better now that you're back in the process again.

If you're gonna have to frog and re-knit, Cotton Fleece is a definitely a good yarn to do it in. I love the color you chose!

Aww...bummer!! I have to admit though I do that more often then I care to admit too. :-)

You certainly embrace the process aspect and the recovery is simply lovely. Well played!

You're neither the first nor the last to do this. We've all been there...

Welcome to the club, honey.

Oh, I AM sorry... happens to me more than I like either. Nice to see that you carried on.

Seems like the more we know, the less we look, and the farther we get doing the wrong thing. It IS a club with many members.

You are in good company my dear! She'll look wonderful when she's done!

Such a cute sweater! I'm sure it will look lovely when it's done. :-)