Zeneedle...needleart as life
Home Archives Profile Subscribe
The Garden Sky
In the Garden

Take Me Out to the Ballgame!

One day last week Smith called to see if I was up for an impromptu evening out. Attending a Bees game with friends sounded like a great idea, but it dawned on me, there was nothing suitable on my needles! All projects in progress were complicated or too big for portability. I love baseball, but how on earth would I make it through a game with nothing in my hands? 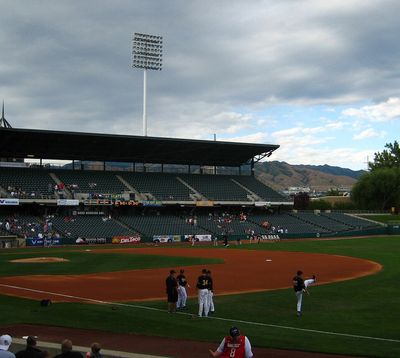 I tried to summon Mr. Sock Mojo but, he was not available in any capacity. I felt betrayed and turned to my stash for help. Stumbling around the fiber/junque room, digging through baskets of yarn and stacks of patterns, offered no inspiration. I was on the verge of tears.

Sometimes my brain is slow in its processes, but I suddenly remembered I had just purchased a new pattern, with the intent of using a yarn from my stash. As luck would have it, housed with the skein of unwound yarn, was a small amount leftover from a mostly used skein. I was ready to go with pattern and yarn. 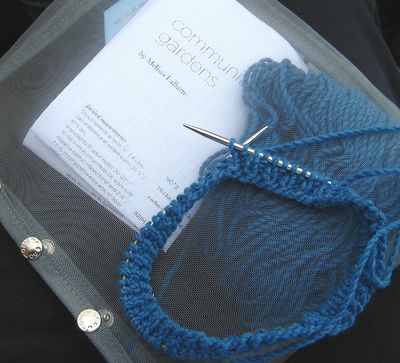 However, when I purchased the pattern I had also printed of instructions for the Twisted German Cast On, with the intent of finally learning this technique. Smith was tapping his foot, but I sat down to figure it out. The first few stitches were a struggle, with constant need to reread the instruction and wrong way twisting, but something finally clicked and I was able to cast on enough stitch to understand the construct. 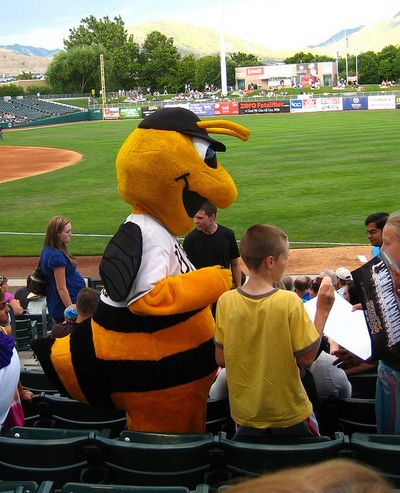 After arriving at the ballpark, my memory kicked in and I finish the cast on without the instructions. (Let's hope this new technique is now stuck in my head.) For much of the game I knit the ribbing, which was simple enough I could keep an eye on the game. We enjoyed our night out, made even better when the Bees won in the 10th inning. I'm chalking up all this success to the magic of baseball.

I so love the twisted german cast on. Stretchier! Not so hard. It took me about three uses to finally GET it in my brain. So don't be so hard on yourself.

And, the mascot is adorable, too!!!

Glad you had a wonderful time and were able to cast on enough in time for the game. I agree with Laurie- don't be so hard on yourself missy.

Love the bee! :-) I love learning new knitting techniques -- but not under pressure!

I now call it the German Twist as my neighbor is German and when I taught his wife to knit, she thought "Twisted German" was too funny! It's my go-to cast on unless another is instructed. Isn't it fun that knitters would not consider a night at the ball park (or a road trip, soccer game, outdoor theatre, or faculty meeting!) complete without portable knitting? So glad you had a good time!

Minor league baseball is so much more fun than the majors! Our local team is the Bluefish...we had the grandson's birthday at the stadium but I didn't get much knitting done. Your Bee is cuter than our Bluefish, for sure!

I've never done that type of cast on, but now I am intrigued and will have to check it out. :-)

How fun that our beloved bee is your team's name and mascot...whoo hoo!!

It's always good to learn a new technique!
The hat will be wonderful in that yummy Beaverslide.

I can't go anywhere without portable knitting, either! I'm so glad to know I'm not alone. I knitted socks during Cal Ripken's final game, as I recall....

Whew! Good to know that you were able to put together knitting to take along and didn't have to just sit there and twitch. :)

Twisted German aka Old Norwegian cast on is one of my favorites! So clever once the hands get the muscle memory for it.

Minor league baseball is the way to go. Last week we went to see the Yankees play the Blue Jays. I was told before I even entered the first door that my knitting needles could not come out of my bag, they would not confiscate them, however they were considered weapons. The only reasonable explanation is they may have thought I was sitting too close to the field and could harm a player if he fell into the stands after a foul ball. Oh well, we are headed to the local minor league team next week and I will try again to mix my favorite pastimes.

Hahaha, our local team mascot is a rattlesnake! Sounds like a fun & productive night.

Twisted German, my favorite. Also, a fun thing be googling when a faintly-known acquaintance looks over one's shoulder. It just doesn't sound like a knitting term, does it?

Ooh...brave woman...seats along the first base line and bringing knitting. LOL! The ballpark is the last place on earth I'll bring mine. Mostly because I want to concentrate on the game, but also because I don't want to be beaned by a foul ball while I'm counting my stitches. :-) The Bees have a nice park!

Sounds like a fun evening! I have had a similar dilemma once or twice this summer and have a small tote with washcloth-in-progress available for just such an occasion!

Ah...baseball and knitting...favorite summer pastimes! I'm glad you could get something on your needles at the last minute...and God bless these patient husbands of ours!

I'm so glad you went to a game! I haven't learned that cast on yet but I know it would be a good one to have in my repertoire.