Packing it All In

The intent of taking an extra day off was to create a mini-vacation, with time to relax, time to play, time to enjoy friends, and even time to fit in some (home) work. 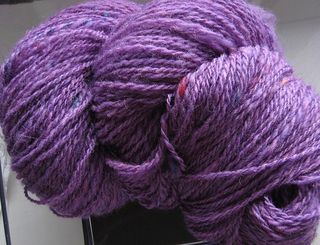 Finally, I made the effort to ply the first yarn spun on my Cherry Schacht wheel, Corrina.  The fiber was one of the sought after thrums from Spinderella and it is now an envenly spun, but very special skein, Corrina's first.

Also, over the weekend, Sock Mojo came for a visit and, while he was around, I turned the heel on the second Carole's Picot Sock

. This week I may make my way down the foot, and to the finish line, if Sprössling doesn't take my attention away. 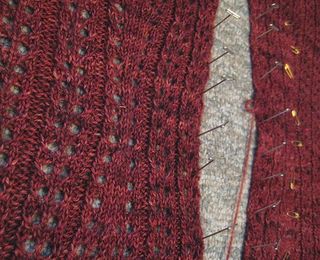 The body of Sprössling was finally finished and blocked and pinning her out shows off her elegance and finesse. Sadly she has been in the works since February and it feels like a major accomplishment to finish the body, when it really should have been that big of a deal.  Kim's yarn is incredibly soft and I can't wait to wear this sweater against my skin. 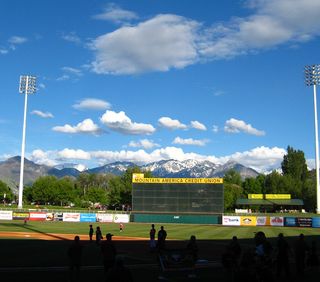 Amidst all this knitting and spinning (and other fun) we made it to a Bee's game. (Thank you, Susan!) The stadium has the best view in the world and it was fun night. Sadly, Susan and I are fair weather fans and, as the 9th inning approached, we complained about being too cold. Secretly, we were afraid the game would go into extra innings because the score was 5-4, in favor of the other team (and it was getting late).  On the drive home, from the warmth of the car, we heard the Bee's had filled the bases and one of the players had been walked in to tie the game. Then, as luck would have it, the next batter made a base hit and brought in the winning run!  Next time we'll at least stay through the ninth.

The weekend was marvelous and there will be many more during the summer, as I intend to take several mini-vacations.

You mixed in all the right ingredients for a perfect long weekend! Your stadium has a much prettier setting than the one I go to.

Sounds like a lovely weekend. Love your sock and Sprossling is looking good!! I have found (in my vast experience) that when you leave early and your team wins, that you are allowed to leave early every time because it brings them good luck. It may be lame, but when you're cold and tired any justification works;-D

What a perfect weekend! Yarn, sock, game, and view! Hope you've got another one right around the corner.

Sounds like a great mini-vacation! LOVE the color on Corrina's first yarn.

Corrina's first skein is lovely! (but then you know I'd think that, right?)
Glad you had a good weekend!!!
(((hugs)))

Sprossling is looking great!! Love the color of your handspun :-)

Lovely knitting, and Corrina's first skein is fabulous as well. We took in a baseball game this weekend, too, but we're hard-core baseball fans and never leave till the "good gamin'" starts. :-)

Have you washed and abused that skein yet? Sometimes that evens everything right out! ( I don't even whack my skeins anymore: I find that swinging them wildly around above my head does the trick.) Your skein looks quite lovely to me as it is...but you know magic happens when you knit hand spun yarn!

Oh, the Bee's! How fun! That handspun tooks terrific! Are we all aiming for our spinning to look like commercially produced yarn? If we are, isn't it easier just to go buy the yarn? :-) There is something more special in the uniqueness of your skein.

I need about six of your mini-vacations myself. What a great plan!

That all sounds wonderful! What a gorgeous backdrop for a baseball game!!

It sounds like you had a perfect weekend - just what you needed.

Did you mention that it was really, really cold.

Your last photo looks like a postcard promoting tourism (a good thing) with those mountains and that incredibly blue sky. Lovely.

What a great w/e! And I applaud your plan to take little "minis" through the summer. And gorgeous view from your stadium.

Pretty nice spinning for 'uneven' get-to-know-you spinning. Sounds like it was a wonderful weekend.

It sounds like a wonderful weekend! Just the perfect mix of activities. . . and color!

What a wonderful long weekend.

That skein is lovely and I'm so proud of you for training for the Tour without me having to nag you. ;^)

Yay for mini-vacations. (Sandy and I just planned one today, in fact!) Sprössling is going to be so gorgeous in that red!

Phun and Pretties!~..
I'm a huge fan of mini/many vacations~..One can never have too many~
Safe and happy weekend to you!

Looking forward to seeing Sprossling all seamed up (as, I suspect, are you!)

That sradium really does have a fantastic view. Lucky you. I can't wait to see Sprossling finished.

Mini-vacations are THE BEST!!! I love them! The yarn you spun is just beautiful...do I have time in my life and room in my house for a wheel? Another temptation...you are bad, Margene! :)

Mini-vacations are such a nice idea! Love the color of your new yarn, and happy to see you are spinning:)