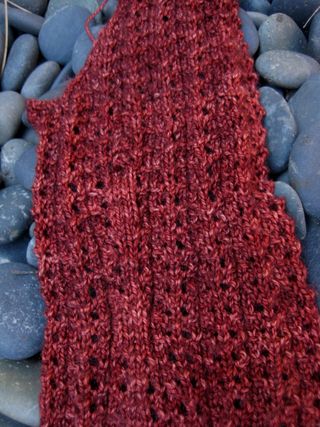 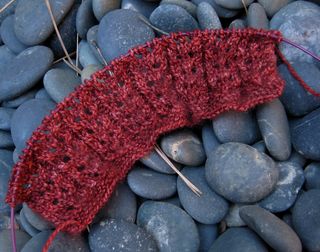 Poor Margene...I want to sprinkle you with pixie dust! I've been there and done that...and made sure it never happened again. Now I use those little string tags from Staples...I mark different finished pieces of knitting with the little tags and attach them where appropriate...along with any notes that I want to remember. I also make notes regarding any changes to a pattern in a knitting journal...not because I'm so smart but because I've been so stupid in the past. Hope this helps with future projects!

In the meantime...knit on through all crises and post your beautiful new sweater as soon as it comes off the needles...I know it will be just beautiful and bring you great happiness!

The only thing this adventure is missing is crocodiles!

I'm still a bit confused, but glad you found your way!

You do spin a fabulous yarn! heee :^)

Show me a knitter who's never made a mistake in their knitting (bonehead or otherwise) and I'll show you a less than truthful knitter. Isn't it nice to know that we've got friends out there to share their own errors and make us feel less silly. I still have to finish the second left handed mitten to go with the second right handed mitten that I made in error.

Whew...for a minute there I thought I was going to have to start calling you "Cleopatra" (Queen of DeNile..). Glad you made it through the rapids...and remind me to tell you sometime about the bathrobe (aka bedspread with sleeves) that I once knit. ;-)

Whew! What a terrifying chapter!

What a fun read these posts have been. So glad the 3 part story had a happy ending!

I shall send you a towel. Between the river and the sweat, you need one. Possibly two.
(This is the reason I always knit my fronts at the same time on one needle. I do the same thing with sleeves. Alleviates some of the stress...)

and hopefully she remembered to rip out that right-wrong side before reknitting???
(grins)
sigh.. we have all done this