Last Saturday wasn't a good knitting day, nor was the day before, New Years Day. NOTHING knit in the last few months has been made without a major number of errors, without tons of frogging and redoing. Every little thing, even easy knitting has been hard won. After 5 restarts I finally gave up Beach Glass, frogged a simple mitt that was messed up, and in total discouragement kicked my knitting bag across the room. The only thing I have to show for it is a bruise on my shin. Smith was horror stricken when I vowed never to knit again.

The doctors had warned me, as had several friends, that healing from heart surgery was an emotional journey, and it has been just that. Some days I feel on the verge…the verge of tears, or anger, or frustration, or self pity, or depression and, usually, I let the feeling run its course and feel better by the next day. Saturday was a melt down day.

I left the house (in a bit of a snit) to do a little shopping and have lunch with Shelley. I knew she'd lift my spirits. After I left the house Smith called her, and in turn Cheryl, to let them know I was in crisis and needed an intervention. As I stood in Shelley's living room Cheryl called and, together, they sweetly, caringly offered the same advice…return to the basics, start simple and rebuild the pathways in the brain. It made sense, it renewed my resolve.  Shelley knew I had a simple project in mind and Cheryl suggested I follow MustaaVillaa's

While I didn't knit anything on Saturday, I did upright my knitting bag and reorganized it. The next day, after a little yarn shopping, I started the new shawl.  It's going to be really cool (and exciting), so stay tuned and see how it goes. 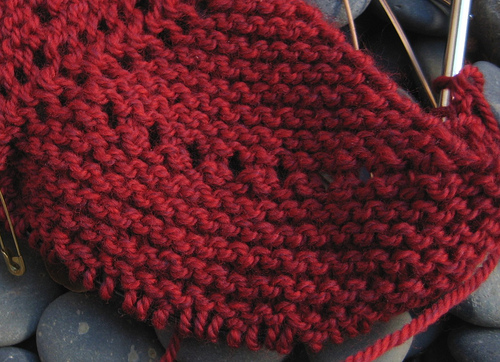 I hate that you have to go through this on an emotional as well as physical level. I wish I could be there to help you get through this. Good for you for getting back on the knitting horse!

Ditto what Carole said. I can only imagine how frustrating it must be for you. Hang in there my friend!

Thanks for helping me understand the emotional journey of healing after heart surgery. This is something I knew about, but never really understood until now.

So helpful to have good friends to guide us back. Can't wait to see the shawl!

There is great comfort in simplicity.

So glad you had friends to get you back on track. Take care, Margene.

I hope you find comfort and love in both the knitting and wearing of the shawl. Sometimes (ok, alot) I crave the simple projects and let the yarn do the work for me!

Ditto what Carole says and many many hugs to you and your grrls!

Rally the troops! Just what you needed. And lots of Hugs - which I am sending along as well!

Hugs and prayers, Margene. How blessed to have such a loving husband who knew to call your friends. And how blessed that those friends immediately wrapped you in love and concern. There is a light at the end of that darn tunnel.

Bless YOUR Heart!!
It's really impossible to keep a good gal down..and as stated, once you're back in the saddle, nothing will slow you down.
I love a simple shawl..(spoken from a gal that knits 'simple')
Sending lots of huge hugs of comfort and gratefullness to your support team..
Hang in there Margene..2010 will be terrific ..just ease into it!!

Hugs to you! Hope things are better now.

I'm sorry for your frustration. I was moved to tears by the idea of your being so frustrated you vowed not to knit again...I'm glad your loved ones gave you such excellent advice...it's going to be a meaningful shawl for you, I'm betting!

*hug* I'm glad you have Smith and such good friends there to support you when things get rough.

I'm glad you have Smith and wonderful friends to watch over and help you! The journey back from a serious medical issue is more difficult than one would imagine. Mine isn't the same as yours but I do remember frustration and depression. Sending love and a hug your way!

That Smith, what an outstanding guy. There's really nothing he and your sistas wouldn't do for you. It just takes time for healing, let it be. That red is a knockout!

I didn't have heart surgery, but did have long anesthesia, and then again the next day for a bleeder. Same effect - knitting went to pot! I finally knit a boneyard shawl, and a Multnoma shawl, and after 14 months am back to lace.

Just wanted you (and your readers) to know it can get better.

Hang in there Margene! Take it one day at a time. My brother went through these same feelings several years ago. It took time, but it all worked out for him. I think it was wise to go back to the shawl (which is going to be so pretty, by the way). However, that said-----Miss BB is gorgeous!!!!!!! You do have a wonderful husband who could see that what you needed was a good boost from your knitting friends. Yeah for him and yeah for your friends!!!!!!

Hooray for understanding husbands and good friends. You are truly blessed. And heck, I screwgy up my knitting and frog all the time, without having heart surgery. You have an excuse!

I'm glad you have such great people around. XO!

I am constantly inspired by your outlook. Sometimes, simplicity is the most beautiful choice one can make. (The yarn doesn't hurt, either.)

Again, Smith is a keeper. Sometimes when we are in the healing mode, it is almost impossible for us to analyze why we are so emotional. Give that guy a hug for me. And, the advice was solid and wonderful. Simple knitting will help you rebuild and return to your awesome knitting prowess. Besides, it's fun!!!!! Love the red, girl.