If I made resolutions, my knitting resolution would be to follow my heart and knit what looks good at the moment. This year there will be no plan (at least I can't foresee one), no goal, no deadline. Whatever strikes my fancy will be the knit of choice.

This philosophy was in action when I picked a new project from the stash. It wasn't long after finishing the first pair of Leafy Mitts, at the end of 2008, when a new colorway from Ruth enticed me to make another pair. Or, at least, purchase the yarn. The project had marinated for about a year, but had niggled at me often. I love the colors, and in this year of simple knits, I decided the time was right. 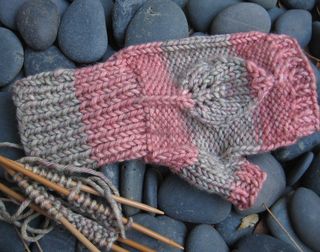 In the first attempt I made the mistake of starting the smallest pair. It was that discovery which put me over the edge and caused the melt down day. But, the next day, when leaving for work, I realized no portable project was on my needles. Not only do I like to knit for a few minutes at lunch, I believe in keeping a "just in case" project with me at all times. A small project in a pretty bag is tucked into my purse, ready at a moments notice. You just never know when you'll need to keep your sanity while in an unexpected waiting period. 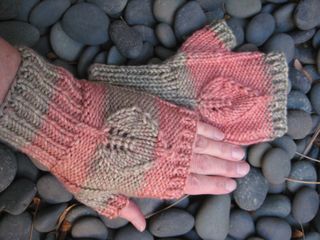 With just a few minutes each day, and a couple of hours Sunday morning, the first mitt was finished. Loving the way the instant gratification felt I started the second mitt and had it finished before Sunday was over. There's something to be said for small project knitting.

In the interest of simple knits have a look at this shawl http://www.cheryloberle.com/FavoriteThings.html#top1 and a pic here http://www.flickr.com/photos/9543553@N04/4211317063/ In real life I have only seen this in handspun and all have been ever so pretty. Best Wishes.

Those are wonderful. Instant gratification is a great motivator!

I love that pattern! So pretty.

I like your new plan and I look forward to watching it unfold. The mitts are too cute!

Got to love instant gratification. Those are wonderful! I love mine in the same colorway.

I think I love that colorway more than the lime green one. And, there is alot to be said about small projects. BTW, I have noticed that focus is the hardest thing to regain. I know I'm working on it;-P

Really pretty. I like how the leaves are different colors for each mitt.

Ah, see that?! You're back already!

Wonderful knit. The colors are so warm. Your plan to have no plan sounds like a smart one. Follow your desires!

The mitts are beautiful. I am all about small knits since I knit at such a snails pace.

Having just started a monster of a shawl, I find myself drawn to quick and simple knits to fill the gaps as well. It's a good balance for me.

Those are lovely mitts! But then, I have mitts on the mind after watching Materpiece Classic on Sunday....

They look lovely and warm!

A lovely way to start the new year..the colors are terrific and the pattern as well..I'm with you in never liking to leave home without a small project..you just never know when there may be free moment or 10.

Cute mitts!
If it helps you to feel better I just realized that I made the largest size on the hat I just finished up...agggh. I have enough yarn left over to make a smaller one, but that will have to wait for later. ;)

Your hand looks very graceful - must be a knitter. :-)

Your new "resolution" is the best kind. Love the way those mitts turned out to be almost mirror images of each other. Fraternal in the best possible way!

Love the colorway. I've been making a lot of mitts and mittens lately. They are just so much fun to knit. These are lovely.

I love it when lots of little things (like knit stitches) add up to a really nice bigger thing. I cross-stitched my way through a few Christmas stockings during lunch breaks back in the day.

Hear hear! Maybe we shall declare 2010 the year of small things in retrospect :)

Lovely mittens, I need to knit one of those too! :)