Near the finish line of Tempest2 several concerns came to the fore. They were niggling concerns, but they halted the process and forward progress. Unsure I could face the truth of another unwearable sweater it was decided that ignorance was bliss. Shelley suggested that trying a sweater on in its unfinished state right before bedtime may not have been the best idea, but the concerns were (or so it seemed) legitimate. 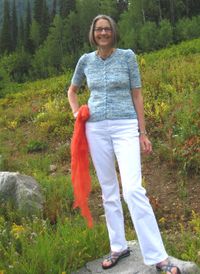 As the blocked pieces were unpinned, the first concern to present was the limp, almost slippery and lifeless fabric. Maybe Koigu wasn't the best yarn for this sweater.  The yarn used for Tempest1

had been very different as its finished fabric had body and shape. Worry over this new Tempest flooded my mind.

The second concern presented as I tried T2 on for the first time. There was no way to hold the front pieces together without buttons, so I tried to pull the sweater into place and use my imagination. The body seemed too long and unflattering.  Even more unflattering was the short sleeves…what had I been thinking by having them hit just above the elbow?

The final concern was the color. Was too light, too washed out and not as beautifully blue as I'd hoped? The white wasn't white and the blue wasn't strong. Bleh…this was not going to be a sweater to love, to wear, to live in…or so it seemed.

Nearly a month later, this past Sunday morning, I realized it was time to face the music.  This was the day to fit in a photo shoot, confess my mess and move on. I sewed each button (all 14) into place and then slipped Tempest2 over my head. What a pleasant surprise met my eyes! She looked fine, maybe not great, but fine, and wearable. I tried her with blue jeans and that was great. Then I pulled on a pair of white jeans and that was great, too. What a relief to have Tempest2 wearable, lovely and finished! 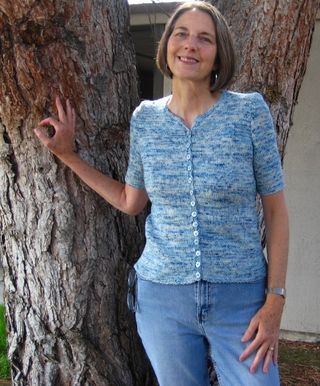 This is really cute Margene, but I really love the striped one on you too. You have such good taste! I don't think I commented yet on your Feather Duster, but I just adore the color of the kid silk. Your finished shawl is fantastic! So cute with Max!

All that worry over nothing!! Love all your knits!!!

Have been away from your blog for nearly two months (a holiday followed by flu) and have I missed something: Tempest 2 (sweet little cardi, especially the endless row of buttons), a sunny Feather Duster, a big and beautiful Cleite (my favourite), Gisela, some socks, some spinning, a scarf and another one on the needles... Amazing! BTW taking this birdseye view made me notice how much your choice of colours and styles differs from previous years. (Due to NaKniSweMoDo???)

I don't share your concerns about the fit or the look of Tempest2. However. I don't count.

You are so prolific with your knitting! And such beautiful knitting too!

Yup. Me likes her. She is going to be a great "oh, whatever" day wear. I have those about every Monday;-P In fact, I figured out I was wearing the same outfit every Monday this summer. It only took me 2.5 months! Happy Wednesday, grrl!

What a coincidence. Literally (I know this is going to sound weird, but it's true) the first thought out of my head this morning when I woke up is, "I'm going to email Margene and ask her about Tempest 2.... is there REALLY some sort of problem with it, and if so, what is it?

Interesting about the Koigu being limp, etc. If I ever got around to it, I was planning on using Koigu for mine, but maybe I should change my mind? Perhaps at that gauge, it doesn't quite make the grade? Have you washed it? And if so, how do you feel about it now?

The drape/handle/sleeves/striping differences between the two Tempests make it look like you have not knit the same thing twice. Both versions look terrific on you.

It looks good from here. I especially like it with the white jeans!

Looks like a winner! Now, if we can just convince YOU that it looks good...

I like this one too! Very versatile. You'll have to hurry up and wear it lots before it gets too cool for short sleeves. :)

Lovely Margene! To see you in these photos it's hard to believe there was ever any doubt that Tempest 2 would not work.

You were worried for nothing. It looks great on you! I hope it turns out to be a sweater you love to wear.

Really nice - that's a lotta buttons to sew on ;)

So glad that your worries were for nothing - it looks great!

I think it looks perfect! I am sure a lot of knitters wish their knitting mishaps could look so good!

I told you! Looks great!

It looks so good on you!

I was going to comment "I'd wear it... too bad it won't fit me." That is until I read the latter part of your post. It does look great on you. I declare #9 a success.

Tempest2 was messing with you - it's gorgeous and looks absolutely lovely on you. Definitely a successful knit! :)