Zeneedle...needleart as life
Home Archives Profile Subscribe
Happy Colors
And Not a Sweater in Sight

Spinning Away the Weekend

As away of avoiding any knitting that had to do with a sweater, I spent quite a bit of time with Emmylou (my spinning wheel).  In fact, I spent more time spinning this weekend than I did at any time during the Tour de Fleece

.  It was fabulously enjoyable until the room became too hot.  Thus, and in fact, this is why I was a huge FAIL at the Tour.  I took the wheel to another room, a cooler room, and that room, since it is rarely used, took Emmylou out of sight and out of mind.  When she is in the junque/fiber room she is ready to go, but it becomes too hot in that room early in the day and SO...July is not for spinning in this house.

August apparently is the return of spinning season and spin, Emmylou and I did.  Look what we made... 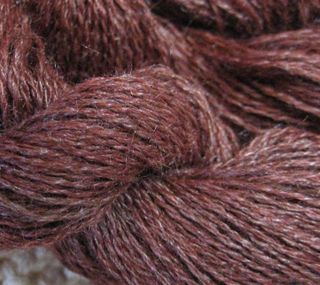 This was two ounces of beautiful alpaca/silk roving from Tactile and it was so much fun to spin.  In the end we only spun up 310 yards, but I'm so pleased with its beauty.  This above picture is before fulling/finishing. 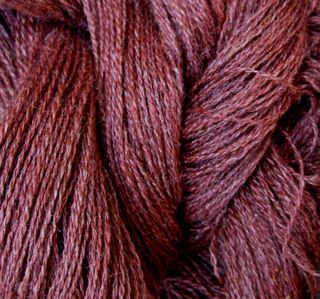 This picture is after finishing school. The yarn is fuzzier, soft, rounder, and quite lovely. The top picture is darker than the actually color. This is a truer color representation.  There is enough yarnage to make a lovey scarf, a lacy beautiful scarf.

Was your weekend as enjoyable as mine?

(P.S.  Knitnana is having a contest. She's celebrating five years of her Nana Sadie Rose company (she makes some of the nicest bags I've ever used) and, not only that but she's celebrating the creation of her 750th BAG! Can you believe she's made that many?  You have several chances to win and she's putting together a wonderful gift package. Don't forget to tell her who sent you, okay!? Now, doesn't that alone make a Happy Monday?)

Beautiful spinning. I was planning on spinning this weekend but I never actually did. Instead I knit a whole bunch of the Featherduster Shawl.

Started my Feather Duster (twice;-p). No spinning. No time. It was a good weekend, though. Love your new purdies and I went over to Knitnana and mentioned your name. Have a wonderful Monday, Sweetie!

Oooo - yes - the Tactile yarn came out really perfectly! And finishing school was JUST what the doctor ordered. NICE!

I did a bit of spinning this weekend myself, but also a lot of riding and knitting. A nice quiet weekend for us, for a change.

Oh, Margene - that yarn is so pretty...You have the touch, hon!

And thank you for your lovely compliment and for sending folk my way for my contest!
(((hugs)))

What a beautiful job you did on your spinning!! I can't wait to see what this yarn becomes. :)

Wow, it looks amazing after its bath!

Sounds like a beautiful weekend, producing some most gorgeous yarn! xoxo

I just got my first fiber club selection from Tactile. Unfortunately, I won't be spinning it soon. Not a lot of spinning going on in July. A lot of traveling and parties so I can't complain!

Ok you are making me feel a little bad about not spinning. I'm sure my wheel is sad that I'm just not into it right now. I'm sure I will return as the weather cools off.

Wow! So fine and even and beautiful! Emmylou clearly had missed you.

That yarn turned out really well! And that color should be really pretty next to your face for the scarf.

Your yarn is beeeeeyooootiful. A fab color, and I bet it's so soft.

Beautiful spinning. I have been avoiding sweaters with amiguri. I am behind on sweaters, but it is totally made up for when you see a two year old "boil" a wooly aubergine in "milk" then feed it to her doll and teddy bear.

Wow - you do a beautiful job. Good weekend here - a little of all the things I love!

Just stunning! I'm in awe of the whole spinning process. (But not enough to try it!) ;-)

You are not a fail! You did spin. That is enough to be in the win column of Team CrankyPants.

I wonder if your wheel would enjoy spending next July in the basement where it's cooler.

Love! the spinning. I think it would make a wonderful cowl for you... assuming winter ever arrives.

That is really gorgeous yarn. The color is fabulous and it looks really even.

I've finally found a place for my wheel where it is always in sight and ready to go.

Funny how we have different projects for different parts of the year. W/O the tour, I wouldn't spin in the summer at all...but usually do in January and February. August is traditionally sock month here. Very silly.

My weekend was more about food, but I did get some nice knitting in! I love the way that yarn finished up.. so much nicer from the extra effort! 310 yards for only two ounces is a very nice amount, and I can imagine a nice, frothy ascot-type scarf or sweet little lace triangle to drape over your shoulders this fall or winter.

I am so completely in agreement with you, that when the heat is rising, and everything gets nuts, spinning is the hobby that I turn to.
Yours is divine.