Zeneedle...needleart as life
Home Archives Profile Subscribe
It Seemed Like a Good Idea at the Time
Saturday Sky - Dawn in a New Year

So many intentions went out the window the last couple of days. I had intended to take pictures of Shelley's Leafy Mitts and the cowl I knit with the rest of the skein...but that never came to be.  I'll make sure to catch up with her Sunday and take pictures to share.  She was thrilled with them and happily surprised by the cowl.

There had also been an intention to take picture of some of the other finished items that have been stacking up around here, including some of the spinning, but that didn't happen.  The list of "Do or Not Do" ("there is no try") was not posted (yesterday) as I had intended, either.  I rather enjoyed my bit of slackerhood.

The main reason for slacking off is NaKniSweMoDo...I've been knitting!  Acer the Pink came to life yesterday and she's growing rather quickly, due to my slacking off on everything else. Getting a good start on NaKniSweMoDo was the one intention that came to fruition. 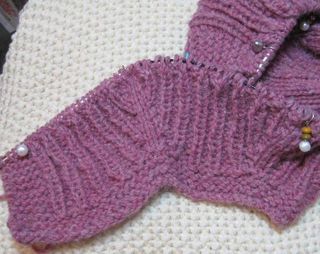 We're getting along famously and as soon as the yoke is finished I expect a blow out.  Yes, I am crazy enough to start Gray Mist as well as Acer.  One must keep the hands happy and bouncing between size 1.5 and size 9 needles has made my hands very happy, indeed.

Enjoy your weekend!  I'll be knitting, shopping (my turn to do some stimulus) and slacking off on everything but knitting.

Glad to see you've gotten such a great start!

Sometimes slacking off is a really good thing. Have a great weekend!

ohhh great choice! Can't wait to see more of it.

Slacker is my middle name..and after many years of being prompt, efficient and semi competent..it feels great~..So Slacking is a good thing when it produces such beauty as Acer~

Wow! I'll say - it looks great already. I love the pink color you picked. It will be another staple of the wardrobe for you!

I envy anyone who had the time to slack off this week, although I don't consider your knitting "slacking off" by any stretch! Another dinner party (family) here! And some very late shopping for a get-together this weekend. NEXT week I'll be slacking off (knitting) my brains out! Acer the Pink looks like another gem.

I was kinda hoping your were working on Sweater Numero Uno. It's lookin' good! And, I completely agree with Nora! Have a great weekend, grrrl!

I think knitting on the first sweater is a great reason to slack! Trust me, I spent all day yesterday in front of the tv working on my first sweater...and it felt great!

that is the opposite of slacking,in my book. :)

typing in these braces is weird. sorry.

The more variety on my needles, the more I knit. Enjoy!

You're off to a good start!

I still find myself scratching my head with wonder at you knitting a sweater per month this year!
(bows head in reverent awe)
giggle

Uhhh, from the looks and sounds of things there's been tons of knitting and that's not slacking...nope, it's not ;)

Great choice!!! I think I'm going to follow along and cast on my own Acer later today :) In Georgia Pink :) I do, however, want the neck line to be a bit more closed up ... so that may take a little fiddling .. but then it'll be off to the races *lol* j/k
I'm joining up the NaKniSweDo too! I need to start finishing things .. this year was a year of starts and not many finishes :(

I don't think you can consider knitting as slacking. Slacking involves bonbons and a movie with no knitting. Lovely start on the sweater ... Happy new year!

I've almost joined you. The sweater I cast on for Nakniswemodo is on size 3s - which is the smallest I've ever used for an adult sweater.

Knitting is slacking?? Oh man, am I in trouble!

I'm glad one of us got some knitting done yesterday! Looking good!

I started Acer the Blue last week - have finished the yoke and am in the stockinette marathon...Yours is looking pretty in pink :-)

Rather jealous of your productivity! I had thought of Beaverslide for Acer. Great choice. Looking forward to seeing it unfold.

That doesn't sound like slacking to me. Enjoy your weekend, Margene.

What a great choice for your first sweater of 2009! I can see you getting a lot of wear from such a nice outdoor cardi.

I know alot about intentions going out the window. I'm looking forward to all the sweaters you will be making.