The weekend was spend under the influence of friends.  This group of grrlfriends enables good times, laughter (often uncontrollable), fiberlust, shopping frenzies (which can be but didn't seem to reach the point of being uncontrolled) and bouts of eating and drinking (which are never uncontrolled or cause us to be illegally under the influence). In other words, there was nothing but the best of times. Cheryl, Kathy, Kim, Laurie, Terry and Carole
Sadly Sandy and Norma were not in the picture, but they should be, especially my grrl, Sandy.  I did not get as much time with her as I'd had hoped.

The Great Rhinebeck Incident, which is chronicled here, here and here had us nearly weeping with uncontrollable laughter AND we were sober! It was a story to rival any Keystone Kops movie and the laughter continued as the story spread. This incident is indelibly etched on my brain along with all the laughter that ensued. The laughter is the main reason I love Rhinebeck. 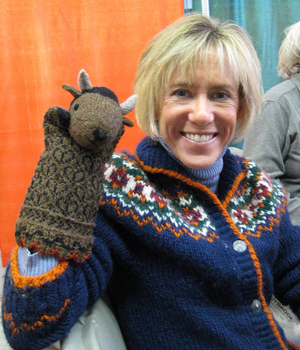 I love this picture!
This picture was taken while we under the influence of JMMs spinning class. Judith is an undeniable treasure trove of spinning knowledge. She left us discussing spinning techniques the rest of the weekend. I may try to put together a post about some of the wonderful things learned.  The picture is of Terry holding a bison puppet that Judith passed around class just before we spun bison fluff (a very difficult task). 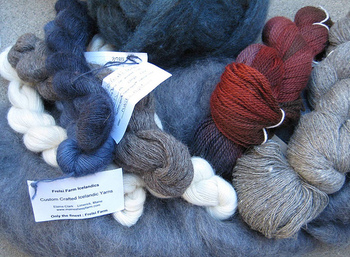 Walking through the barns from vendor to vendor quickly puts one under the influence of fiberlust. There is so much to see, so much to desire, so much to touch.  The plan I had was to buy little to no yarn and that plan lasted for about 2 seconds.  I walked into the Briar Rose booth with very frigid fingers which caused every yarn I touched to yelled MITTENS! Under the influence of the weather, I impulsively bought the skein of wool/mohair in lovely autumn shades of red. There is no buyers remorse and there will be a pair of knit mittens in short order. Also, under the influence of "last of a kind", I bought a large skein of Susan Briggs Icelandic lace weight from Tongue River Farms.

While I may have passed up the Icelandic roving I did not pass up all spinning fiber. Foxfire's cormo wool, one bag plain and one blended with silk, made its way home with me (not pictured).  The blue fluff at the top of the photo is Jacob (a wool I have yet to try) dyed with indigo and the gray batts at the bottom of the picture are from Barnswallow. They screamed SHAWL and I was immediately under their influence.

Golding is another booth that hypnotizes me and puts me under its influence.  This spindle immediately spoke to me, as did the spindle Terry is spinning with in yesterdays post.  The understated beauty of this one won out. It's maple with a thin metal ring of bright fuchsia and it spins like a dream.  It's my true Rhinebeck souvenir.  Everything fit nicely into my suitcase and I came away with more ideas for future purchases.  Not everything needs to be owned, bought or desire at one time. While purchasing all this lovely fibery stuff, much laughter, chatting, eating, drinking and hugging happened.  We were all under the influence of a fabulous fiber festival. The trip to Rhinebeck was to be with "my people" and not for fiber hoarding.

Just reading about the whole Rhinebeck experience gave me a warm fuzzy. I'm so glad you had such a good time! I am a bit jealous of the opportunity you had to learn under JMM. So I do hope you'll put together a post of all the nuggets of wisdom you learned at her "feet". :)

Yes. That was exactly it. Under the influence of good friends. It was a very special three days.

What a great post!!! So true that the festivals are so much about friends..although the fiber is terribly tempting and I've never left empty-handed..Fiber related events are definitely a Friend 'Thing'
Some great looking buys..but the uncontrollable fun with your friends weighed in heavily~

Your memories are priceless. Thanks for sharing them. And, the haul? Damn. I'm so overwhelmed. What goodies!!!!!

I love being under the influence of all of you! The spindle is beautiful.

I had more fun at dinner and the hotel than at the wool fest, so I totally understand. I laughed pretty hard at the deer/not deer situation and I wasn't even there for that. Good thing because I probably would have pee'd my pants.

The colors of some of your purchases look like they were definitely under the influence of Terry and her favorite color blue :-) Nice collection of fiber, yarn and spindle. You forgot "unforgettable fun"! Wish I had been there.

We sure did giggle a lot didn't we? You came home with some beautiful little goodies, especially that spindle. Very nice!!

You had a great weekend all around! I can't believe I left without Briar Rose fiber. I went back and forth over it all of Sunday until I left without. Next year....

The blue Jacob is gorgeous. I can't wait to see what you do with it.

Your under the influence purchases are beautiful!

You must post all spinning knowledge for those of us that weren't able to be there!!!
I really looks like you had alot of fun.

Looks like a great time with friends and lots of fibery stuff.

What is not to love??

I would only add "Uber."
XO

A wonderful, fun-filled recap! Friends and fiber are a combination that can't be beat.

Great U! It looks like it was so much fun...

It was uber-fun!! So many silly moments. And I loved that your some of your Ewe-tah girls were there too!

Thank you so much for sharing your trip to Rhinebeck this week! I could almost hear the laughter, touch the wool, and smell the sheep, even though I was here in Utah all the time.

You and your grrls are too much! I'm sorry I didn't introduce myself to you -- I was in a bit of a festival daze by the time that I bumped into you and Laurie.

The Great Rhinebeck Incident sounds like a movie title.

I sure hope you decide to post the spinning info you learned from Judith. So many of us just don't have the opportunity to learn from her in person, so sharing your experience would be a real treat.

Looks like you had an amazing time and I have my fingers crossed that I can attend next year.

thanks, Margene. i'll be under the infulence of your Peaceful thoughts today.

Understandable that you had such a good time. Expected, even.

I'm soooo glad you got east for this, but so sad we didn't have more time together. I'll repeat it again: At least we had July. Honestly, if we hadn't, I'd be truly moping about it.

That Golding is STUNNING!!! I just love Goldings. XOXO