The policy of UFOs and WIPs here at Zeneedle is an easy one to report.  Few WIPs, no UFOs.  (Right now I'm not counting the one sock that seems to still be on the needles, going nowhere.)  If a project doesn't grow, it goes bye-bye…frogged, DOA, gone. No grow, no go. There have been one or two exceptions, but that's a story for another day.  By keeping the WIP action to just a few they have a better chance of quick growth, which in turn leads to survival. They grow, they stay, the reach a ripe old age.

What usually happens, however, is a little flurry of finishing…two or more projects come to completion in sequence, which in turn leaves the needles, and hands, bare, alone, in need of yarn.  Then comes the fun part, the part that so many knitters love, love more than any other part of the process (ah, there's the rub)…a new beginning.

One knitting craze I never really took to was scarf knitting.  The proliferation of fun fur scarves, quick little knits (I DO realize they served a larger purpose of creating dozens of todays fabulous knitters), jauntily worn by the hordes, just wasn't my "thang". Don't hate me, don't shoot me...not every craze is for everybody. But, never say never, as I am now (late to the party) enjoying the action of knitting scarves. (Can I say I will NEVER succumb to fun fur?  I CAN! Never, never, never ever.)

It might have started with wearing lace stoles and shawls as scarves. Having a soft, lacy knit tucked under my chin all winter kept me warm, brightened a dreary winter day, and lifted the mood. It's been nice to have something around my neck during air conditioning season, too. To that end, why not knit beautiful lacy (or not lacy) long pieces of fabric with all that unused sock yarn?  In quick succession I've knit Persephone, Japanese Vines, and Holding Hands.  I have LOVED every minute (almost every minute) of the process and I want more. 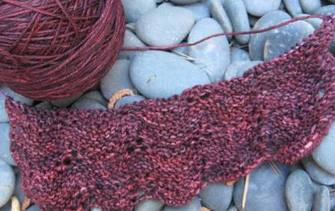 As soon as Holding Hands came off the needles I knew what would be next.  While playing in the sock stash and pulling yarns for the contest I found Kim's Black Velvet Woolen Rabbit yarn and knew it had to be the next project, the Japanese Waves Scarf just added to my Ravelry queue.  Together they would make a perfect marriage. Crushed Black Velvet (as I'm calling her) is going to stay and grow. 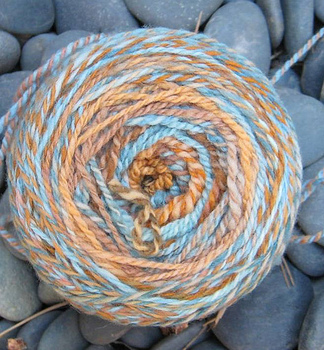 Lest you think this obsession will be short lived, I have the next three (maybe more!) scarves planned.  First will be Morning Surf with Susan's beautiful handspun (purchased in an auction), Sedona. The next scarf (yet to be determined) will be knit with my handspun....Spunky Club Aspen, a beautiful shiny merino/tencel.  With the sock mojo on the lam...it looks like I'm on a scarf roll. 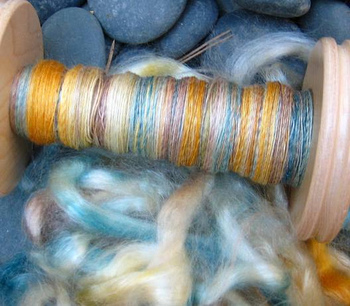 Scarves are divine - and so are cowls :-) (perfect for those small 200 yard handspun skeins)
oh and yeah.. the fun fur??? I can easily say neaaahhhvvvuh.

Welcome to the scarf club -- I always have a scarf going -- I love them!

I think scarves are fun for a bit but then I get sick of them. That's the beauty of knitting - you can always find something new and fun to knit. Of course, you know I am like you with the WIPs and UFOs. Right now there's only two things going on the needles here. Twist and a pair of socks.

I have yet to be bitten by the scarf bug, but there is still time;-) I love your Crushed Black Velvet. She is lovely. And, the Aspen? It is absolutely beautiful. Since I'm having so much trouble with the short rows,maybe I need to start scarf knitting. Now, cut that out!

I place lace scarves in a completely different category from basic scarves. :)

It's nice to be in control of your own knitting destiny isn't it!

You're building a nice collection of scarves. Japanese Waves is coming along nicely. And I like Morning Surf so much that I've already printed out the pattern.

I had said I was never going to start knitting while taking one of many quilting classes. But then I decided ok I'll try it, thinking I would never be able to get the hang of it. But now I can't stop!!

I love your hand spun, the color is so pretty it would make a beautiful scarf. Good Luck with the scarf bug!

I will admit to making the fun fur scarves but after that I told myself that I was done with scarves. Not so - I made some beaded scarves for gifts and have recently finished the Lace Ribbon Scarf and bought several more patterns/kits. As you said - never say never.

I will admit to one or two "fun fur" scarves way back when, but they were sold through a local shop. Scarves, even simple ones, have a purpose...using up small amounts of yarn....but they make great gifts at holiday time so I still knit them! Good car knitting, too! (What got me through a time when T was in the hospital for 2 weeks with an unknown stomach issue, and the resulting surgery, was a lace scarf, now that I think of it.)

I should adopt your no prisoners policy on my knitting.

Scarves (and especially cowls) are the new socks, I think. ;-)

Crushed Black Velvet looks like another one for the queue. From your picture, I'd guess that the pattern is some kind of garter-based version of feather and fan... does that sound right? Anyway, yours is stunning. The yarn is spot-on for that texture.

Look at you, all on fire! Me, I love scarves. Maybe time to add some to the TBKnit list?

Hey, a little bit of well-placed fun fur can be a knockout in a project. Okay...emphasis on little bit and well-placed, but I'd hate to see novelty yarns disappear entirely. They can add texture and just the right pop of color to many projects. And how will I knit my granddaughter a furry muff in a year or two if fun fur disappears?

That said, I'm getting ready to tackle my first major lace project, and it would certainly simplify my life if it were a scarf rather than an entire shawl. What a great way to nibble on all the beautiful lace patterns that keep distracting us. Crushed Black Velvet....perfect name.

Must be in the water or something. I just cast on for a feather and fan scarf out of some of my first hand-dyed yarn. I could.not.wait! I like your handspun too - very pretty - both what you purchased and what's on your bobbin. There are some beautiful scarf patterns out there right now that I am dying to try. I'm new to lace so they are the perfect size to not overwhelm me. Love watching your progress! t

I just started a scarf with some wonderful Malabrigo I just bought. So soft and it goes fast. Sometimes I need instant gratification in my knitting.

Those yarns are beautiful. I have made scarves but I tend to avoid them because I know that halfway through I'll get bored stiff. The patterns that you're choosing are all really lovely though and very tempting.

Yahoo! I am ALL about wearing scarves all year round, have a small but premium collection of long, narrow silk ones for spring and cool summer mornings, and took to scarves back in my youth (maybe it has something to do with my mama saying she was part French?). I also am big on other small accessories, and never leave the house without earrings...scarves will also do well with your large collection of pins. I have Morning Surf on my list too, but haven't started spinning the yarn yet, as I agree with keeping the WIP list manageable and have to finish spinning for the Circle Vest before I get to start on the lovely stuff I have waiting for Morning Surf. I especially like the rich colors of Black Velvet, but Susan's Sedona will pay special homage to Morning Surf... happy knitting!

I think I need to take a hint from you and have less wips going on. I have a feeling it would result in fewer ufos!

I actually started knitting to learn to make 'fun fur scarves' because they were all the rage..I outgrew fun fur quickly but not my love for a scarf pattern..that's why I am so fascinated by all your pretties of late..it plants seed...and I have a bag reserved with extra sock yarn to make that scarf of many colors..just not the pattern yet.

Lovely!
When I'm not doing socks this summer, I'm working on Anne's Boing! in a very lightweight fingering...it's just pretty and lacy and frothy!
I so agree...they're a delight at the neck in the winter.

I too have entered a scarf phase after not having knit a scarf since high school. They do have a place in the not-too-complex things I need right now. Some of mine don't even have known recipients, but will go to someone other than me. I just want to knit that yarn now.

Yours are beuatiful. The Black Velvet will make a luscious winter accent.

hmmm... I love your hand spun for Sedona!
What happened to the Hand Spun Lace Ribbon?

the color is lovely. and it isn't like you are just knitting garter. love the orange shawl. what a cheerful color!