Zeneedle...needleart as life
Home Archives Profile Subscribe
Best of the Weekend
Once I Was...

If there was ever proof of just what a lucky grrl I am...this weekend brought it home. As we all know, it isn't the fiber that makes a festival fun, it's the people…hanging with the grrls.  The drive to Idaho took longer than it should have, due to a wrong turn. My companion for the trip (N.) was very forgiving and relaxed about the whole thing.  When we finally arrived at the festival it only took a short time find Laurie and Anne.  They were at opposite ends of the display area so we were forced to walk past all the booths over and over and over (life is hard). 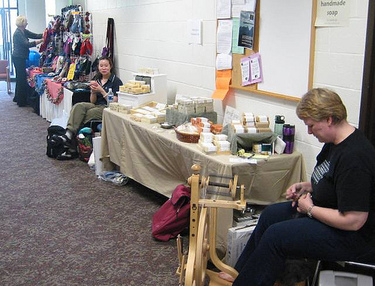 The Snake River Festival is held inside the hallways of a technical college. At least this year the hallways were light and bright. Last year it was like being in a cave.  Sadly this festival has no animals, but there is much to be had in the way of fiber, yarn and other supplies. N and I did a nice job of shopping and I'm very happy to report that she bought a spindle and some fiber.  It was a very easy task to bring her to the dark side.   Rarely did I think to bring out the camera, but I did grab a shot of Laurie's booth, where she sat patiently helping customers (at one point she was surrounded by a very large family with small children!) and spinning when she could.  At the other end of the table sits N.

Kim might not like this picture any better than the one from yesterday, but the grrl does talk up a storm and light up a room.  I have no idea what's she's doing but it may involve a spindle and no spinning (and perhaps some bitching?).

There was a bit of fiber purchasing.  First is a colorway that grab my attention called Deepest Lagoon by Wasatch Watercolours, next is an angora/silk/merino blend called Solstice (be still my heart) from Wooly Wonka, and then bit of Ashland Bay Merino in "Mahogany" for a bit of spindle spinning practice. 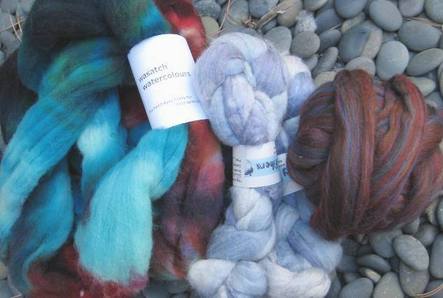 In keeping with my "never buy at a festival what you can buy in a shop" rule. I bought a beautiful charcoal yarn, of lambs wool from Notlwonk Farms, which was spun (so nicely!) by Spinderella. The plan is for a cardigan, in the not too distant (but, as yet to be named) future. 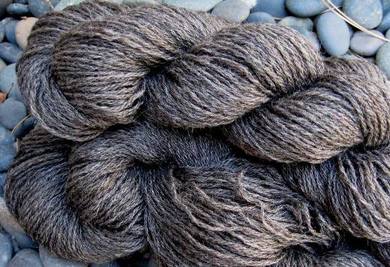 And in breaking my afore mentioned rule, I bought this lovely hand dyed lace weight. Look at it! How could I not buy such a beautiful, stormy looking future shawl? 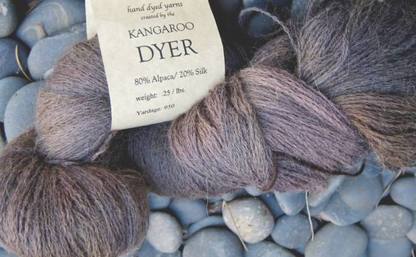 It can't be said too many times, but even with all the fibery fun, the best part of any Festival is spending time with other fiber buddies.  No time is better spent.

Ah, but wouldn't you have to come to Webs to get Kangaroo Dyer? Nice stuff, good times!

I couldn't agree more about the real joy of a fiber festival. Glad you had such a fun time!

What fun!..and some lovely purchases.
We have our local Fiber Festival this weekend which I've been involved with the planning etc..and it sounds like the weather Goddess is going to finally smile on us which will be especially nice because it will be indoor/outdoor with some animals.
www.sedaliafiberfestival.com

You will love the Kangaroo Dyer yarn! I just finished a lace scarf from some of her kid mohair/silk yarn - scrumptious! Plus, and you'll like this, Gail Callahan is the dyer and one of the absolute nicest people you'll ever meet. Just lovely. Go to her etsy shop (user name kangaroodyer) and buy more of her yarn - it's all good stuff!

So great for me to see Anne and Kim in the photo! Cracks me up to see Anne's tablecloths so predictably purple-colored. :D

I swooned over the handspun by Spinderella. Unbelievably gorgeous.

What lovely "prizes". You have such wonderful fiber artists in the West. I'm so glad your weekend and the fest was fun and productive. As for the wrong turn, good thing you weren't with me. We'd have ended up in Michigan:)

Ahem. I think it best not to ask what is going on in that picture.

And I think I need to wear more makeup in public. Sheesh. Death warmed over.

Totally agree. Would love to get to an event like that but worried of the impact on my wallet.

Love the charcoal, can't wait to see what pattern you come up with.

That gorgeous charcoal yarn would be great for one of the cardigans in A Fine Fleece...just saying. Good haul for a small festival! I'm going to revisit the Massachusetts Sheep and Woolcraft fair this weekend but don't intend to buy a thing. Yeah. Right.

Glad to see you're not a strict rule keeper when it comes to fiber. Beautiful fiber purchases!

What fun! (I recently broke the same rule for some laceweight that was a steal.... any suggestions on good patterns for variegated pink yarn?)

We have Sedalia this weekend! I can't wait - and I'm going with my newest convert to the knitting obsession - my DD!!!
We have hope that the weekend will go well...
lolol
What a great time you had!
(((hugs)))

So true, so true - fiber folks are the best!

It looks like a great time! I would be jealous, but how can I be? We have no shortage of wonderful festivals here in the Northeast!

I am excited to see the sweater you plan--that yarn is lovely!

What lovely fibers and yarn. Hmm, I see some spinning in your future :-) (and a distinct absence of sock yarn!- giggles)

Great choices, Margene. You have a wonderful eye. I tend to be attracted to yarn colors that won't necessarily make garments that I would love to wear. I'm learning.

Well done! :-) I'm so glad you broke down and bought the gorgeous laceweight. I can't wait to see what you'll do with it! :-)

You got some great stuff!

It looks like you had a fun time with the Utah girls! Beautiful fibers!

I do wish I hadn't been so strong at Notlwonk Farms table. They are such lovely yarn! And Kangaroo Dyer is a great find! Can't wait to see masterpiece you knit it into.