Zeneedle...needleart as life
Home Archives Profile Subscribe
Spinning Past and Present and Future
A Better Day

The last post belies the energy levels.  It was written Saturday afternoon under the delusion I was/had improved.  How can one feel better before getting (much) worse?  I never saw Sunday and Monday was only slightly better.  There were no photo shoots and little knitting was accomplished.  I'm praying the first day of the year is a turning point.  Sunday was a snowy day and big fat flakes of Utah best snow fell all day long.  It was so beautiful, so peaceful. 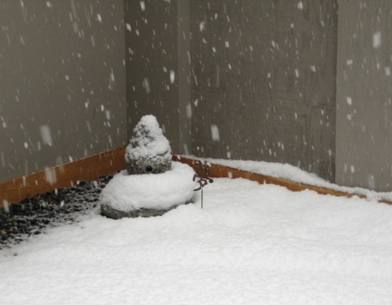 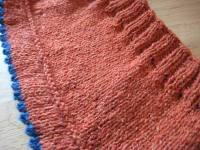 THE swatch was finished and washed.  This is only a swatch.  If it were more than a swatch the yarn would be a lovely shade of gray and it would be much bigger around.  Later on Monday, as I began to feel (ever so slightly) better, all the EZ books came off the shelf and calculations were made for the EPS.  I should be able to cast on later today as planned.  Before then I need to decide between the ribbing or the hem.  First thoughts are for a one color hem on the body, with colored hems for the sleeves and, perhaps, a bit of colorwork, too.  I'll share the calculations in a later post.

Since my goal was to finish what was on the needles before the end of 2007, (Kelly Cardigan, RIP. It's grow or go around here.)  there wasn't much knitting except for the elegant blue gloves.  They are lovely and waiting for their day to show off, as is the long suffering Logan River Wrap.  The main focus for 2008 knitting, in the short run, will be the EPS, but there must be a little something on the side, no? A little bit of beauty, a little bit of decadence, a little bit of elegance...as in lace?  Yes. 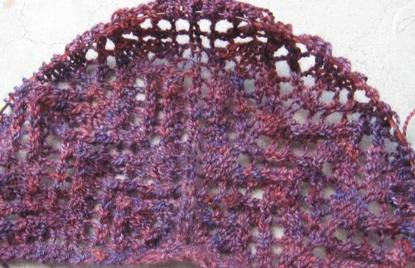 Kim's Sangria fits the bill, in a simple lace pattern derived on my own from Evelyn Clark's, Knitting Lace Triangles.  It's onward and upward.  Happy 2008!

Hope you are feeling better soon. I am going to do my calculations while I wait for my yarn to arrive.

Happy New Year! Get Well! Now that all that happy horse pucky is said, seriously, it's a time of rest and reflection with some of that beauty being allowed to permeate our beings. And hugs.

Hope 2008 rings in much better health!

You've really be struggling with this flu/bronchitis! I hope you are truly on the mend this time. Wishing you a good day of feeling better and a very Happy New Year.

I'm sending good health vibes in your direction. Sounds like you got hit hard.

Oh no, are you still coughing? Maybe your doctor needs to try a different medication. Do you have asthma? Two winters ago I developed asthma for the first time, after having flu that turned into pneumonia.

Feel better soon! This seems to be an extra-nasty cold/flu season. I'm looking to add more EZ to my knitting in 2008 as well, perhaps even an EPS!

Happy New Year! And I'm keeping my eye on you (just one eye). It may have faded from everyone else's memories, but I will never forget what happened to poor Joho. :D

May you have a peaceful, abundant, and joyful 2008.

So sorry you are not feeling 100%. Happy new year to you Margene!

I sure hope you're feeling better today. I'm sorry you've been so sick. Happy New Year, my dear friend.

Hope the New Year has you feeling better!

I like that, grow or go... seems like a super way to weed out the old wip's.
hope you are back to feeling fabulous very soon.

i thought you were going to be better - it's a new year! take care of yourself and hope you get well quick!

Happy New Year! Hopefully you are still taking it easy and are feeling better.

Oh dear...I hope this finds you feeling a wee bit better. This nasty flu bug has really kept you down. Healthy vibes are heading your way!!!

Hope you feel better soon. Look on it as an excuse to wrap up and knit when you feel up to it. Happy New Year!

I do hope you woke up to the return of sparkling good health! I imagine you have become quite discouraged.... hang in there and get the rest you need. Photos, playing in the snow, even knitting can take a back seat for a bit until you are truly better. Sending loving and healing thoughts...

Happy New Year! Hope you are finally feeling better soon! Hmm, the hem with a garter ridge has an interesting look to it.

May 2008 bring you good health and prosperity in all things, Margene. :)

I'm so sorry to hear you're still feeling ill.