The good weather peoples have predicted the possibility of flurries this afternoon.  Fingers are crossed (and toes, too!) that this is the first of many storms to come to our neck of the woods.

As a way to offer help, living by example if you will, I have created my own flurries...a flurry of finished project (and the start of a few new, too).  Thank you for your comments on the Pink Portrait. It's a fun scarf to wear and I love, love, love it.

Another FO that I'm completely in love with (as I am with ALL the FOs this week) is Anne's Ceilidh Lace Socks from Wooly Wonka. The yarn is a bamboo/superwash wool and it has a luminescence to it. Anne's dye job adds another layer of luminescence and is aptly named, Seashells.  Aren't they as pretty as can be. (I'm all about pretty this week.) 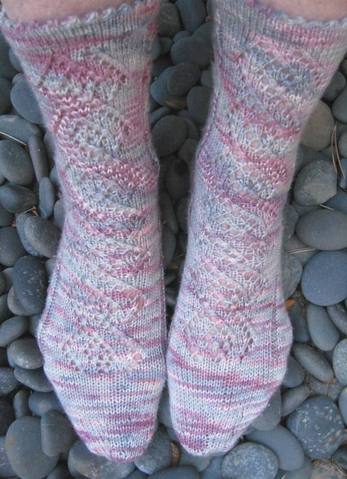 (I've been going to the gym after work and getting home after the good light is gone, so sadly, the picture isn't that great.)

Thursday morning I decided to reorganize the stash.  There were a few new yarns to put away and it felt like the right time to give the old stash a good petting.   I was a bit worried there would be need to add an extra bin (I have 5), but as it turned out everything fit perfectly.  The sock yarn was moved into the largest bin (no more sock yarn!), but with the removal of the Blueberry Borscht Peace Fleece, I had room in the sweater bin for some new Beaverslide. 'Catbird' just had to come and live with me after Cara posted about her new sweater.  It's in marination stage.

While diving through the stash I found a very pretty Apple Pie in Cornflower Blue and decided to use it for Véronik's Long Gloves from Knitting Classic Style.  Its time for a change of pace from sock knitting and blue gloves will be so bright and happy in the dead of winter.

Over the long weekend I did get a good start on my new favorite project, the Logan River Wrap from Interweave Knits Winter 2007 (designed by Mim). The yarn is Queensland Kathmandu Aran and it is so soft and luxurious. After knitting up the first ball I decided to make my wrap a bit longer and ordered two more balls for a nice long wrap (most of you won't need to do this, me thinks). This pattern is very, very easy to read, easy to knit and loads of fun. It's hard to put down, hard to work on anything else, as it's such easy, rewarding knitting.  Dropping a stitch to create the undulating water rapid is a blast and just watching the pattern form is addicting.  I predict another quick knit and another finish in the near future. 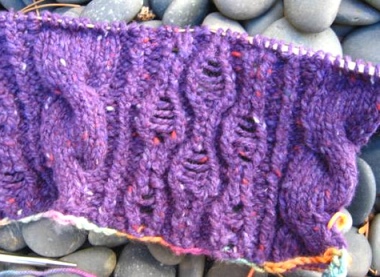 That bamboo superwash sock yarn is lovely isn't it :-) Look out for a new design especially for that yarn soon ....;-)

The socks are GORGEOUS! What a lovely conglomeration of pattern and yarn.

Definitely all about pretty over here this week. Lovely FOs, Margene.

My sweater yarn stash wasn't too bad, if you didn't count the UFOs. Then I decided I couldn't live without Jaeger Extra Fine Merino in my life anymore. Maybe my bins are smaller than yours.

Please do appease the snow gods. I depend on it.
Your color is themed this week, and absolutely beautiful. I can picture you with the wrap around your neck and shoulders, in coldcoldcold Park City.

Those socks are wonderful and I love the purple of the Logan River Wrap!

Beautiful socks! They look so delicate too.

Wow! Hadn't been whelmed by logan river.... but you know, with the closeup? Finally I see the appeal. PURTY!

The socks, of course, are great!

So many beautiful projects. You are ambitious!

I avoid stash diving. There is where I hoard.

The socks are gorgeous! And after experiencing four days of dreary, gray weather, I see the wisdom of knitting with bright colors for the winter. I love the blue for the Long Gloves.

The socks are lovely! And of course I love the purple of the wrap. :)

Love that blue for the gloves. I'm not familiar with that yarn, so I'll have to try to find that yarn around here.

Love the socks and figure Logan River will be done when I get there, no?

Those are such pretty socks. I agree that you have the perfect blue for your new winter gloves.

Very lovely socks! Anne sure has a talent for handyeing... I am glad to hear that Logan River is such a nice pattern; it is getting started after KUTO and the two gifties I have to make. I even get to use some stash from my visit with all of you at Estes a year and a half ago! Of course, yours will be both longer and more colorful, unless I try dyeing!

Quite a flurry of pretty yarns & projects! The bright blue will be a great punch of color when winter is a bit dreary. The Logan River is looking great - I'm thinking of that for me - I have 5 balls of the yarn in stash, need to see if I can get a few more.

The logan river wrap is on my list and I can't wait to start it now after having a peek at yours. The socks are beyond pretty - totally gorgeous, and they shine :)

Your socks are beeeeeeutiful. I also am loving the Logan River wrap. I am planning on starting mine when my Christmas knitting is complete (which isn't soon enough).

Lovely socks. I'm knitting something similar for little girls--it's a bamboo blend from Sheepaints called "Cinderella" in that certain blue. I've only got the toes knitted, but think I'll go with monkeys. If only so I can keep calling them Baby Monkeys.

Those socks are so pretty! And your Logan Wrap is going to look fabulous.

Love that wrap... oh, so many projects! I'm itching for organizing -- that must feel great.

What a busy bee you've been! Those socks are stunning. I should do some lace socks one of these days. (Maybe in the spring. As the days get colder, I am all about the cables.)