Zeneedle...needleart as life
Home Archives Profile Subscribe
Random Things
What are Friends For?

I Should Know Better

So, as I said yesterday...Kim’s cool felting looked like fun. She made it look easy and  Smith said he had the needed tools on hand...why not give it a try.  Truly, I should know that trying to learn something new, something untried and unique, usually leads to disaster, at least when unsupervised.   If only Kim lived near by...sigh. 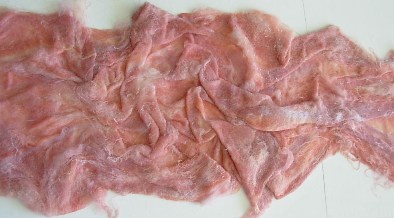 It isn't that I'm untalented in the many aspects of needlework, but most of what I know was hard won.  Some techniques come easily, others took many years of practice, and this one certainly needs more work, as you can see.  You might say I'm a jack of all (needlework) trades, but a master of none. Kim it isn't you...don't fret.   Even after carefully, so carefully reading through the instructions, check to be sure all the tools handy, and each step followed as well as I could, it wasn't good enough.  All I got was a felted rag...sigh.  In hindsight it may be that the fiber wasn't wet enough, or maybe not thick enough, or...well, it was certainly something!  Sigh... 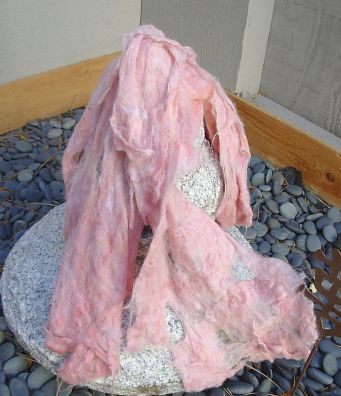 I did have better luck with my knitting project.  Many of you guessed that I'd started a Mitered Mitten (from Knitter's Almanac by Elizabeth Zimmerman).  The yarn is handspun from Manise and it was so much fun to watch the colors change as I knit. The yarn is SO nice, Manise...you did a fabulous job of spinning.  The pair will be fraternal, which is perfect for handspun mittens, and that suits me just fine. They will also be so warm...perfect for winter walks with Moxie. 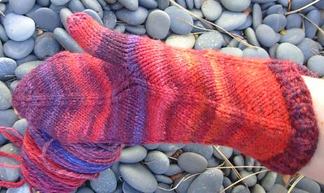 The yarn softened beautifully when the mitten was blocked and it's so nice against my skin.  As you can see I have the same problem with the mitten thumb that Susan had.  On the next pair, I'll figure out a way to add a few gusset stitches so the palm seam doesn't pull so dramatically.  I've cast on and should have the second mitten finished soon...it is getting cooler each day and they'll be nice to have. 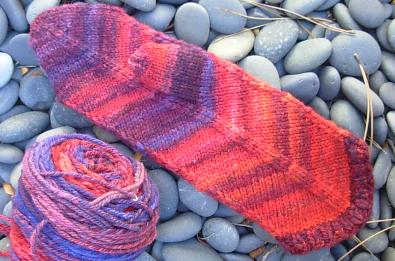 Maybe I should just stick with knitting.  I seem to have figured it out well enough.

Well, at least you gave it a shot. You'll never know how good you are at something until you try, right? The scarf may not have worked out, but the mitten sure is lovely. The colors match your blog so well!

Lovely colors, lovely spinning/plying, lovely fiber, lovely pattern! It is amazing to me to see EZ's patterns translated into the color explosion fibers we have now. I remain in awe of the woman's knitting architecture knowledge decades after I started reading her stuff!

I use bubble wrap (with the small bubbles) instead of screen mesh, and have never tried the power sander, although I had heard of it before.

Your mitten is beautiful!

Love the mitten - the colors are awesome. Sorry the felting wasn't super successful. Makes me think I'll wait for Kim to show me in person before I give it a try. :-)

Felting is something I am working my way towards. One day this winter...
And that is an incredible mitten, both in color and pattern. Beautious.

That mitten is gorgeous! And the yarn striped- whoo hoo! I'll have to get Amy to dye more fiber for me. It was fun stuff to spin. Sorry the felting felted not as you had hoped.

But it is a very pretty rag. And being felt there is always something you can do with it. It can always be transformed into something else. Save it. And one day when I come to visit (I'm sure it will happen eventually), we will make it into something beautiful.

I love the mitten.

This is why I have not tried felting anything yet, and I really want a to knit a tea cozy, felt it and then needle felt it, but I'm a chicken so I keep on knittin'.

Gorgeous mitten! I love the striping!

And we rarely are perfect the first time. You know this, I know this, and yet it's a surprise isn't it? Annoying.

Oh dear..... I so wish you lived closer to me too! What type of fiber did you use?

I'll tell you what....if the ladies at Spa will let me do a little felting demo at my booth, I will teach you how to do this. It truly is easy peasy, once you get the knack.

Another reason now for you to come east :-)

I LOVE your mittens!

Felting really is a matter of feel, something you can't teach through distance. You have to experience it in person. I don't use a sander like Kim does. I like the tactile sensations too much. I'm in felting mode lately - made three scarves yesterday. It - oh, oh, here comes the pun - felt good!

You should talk to Vicki about your mitten. She was knitting them while we were at Rhinebeck and she figured out the thumbs. I think she kind of hybridized the EZ pattern - but they looked great.

The yarn is gorgeous too!

Sorry about the felting. Pretty funny though. ;-)

You sure worked hard to show the "rag" off. Can it be continued, a work in progress? I think I'll wait for your updates.

At least you made me laugh.

The mitten looks terrific -- the colors are so nice!

Sorry about the felting -- I'm interested in trying too -- maybe a demo from Kim is just the thing.

You should have done that felting BEFORE Halloween, not after. Sort of a pink ghostly feel. :)

The mitten looks wonderful. I'm a big fan of gussetted thumbs. It's my only problem with the gorgeous ethnic mittens. They're pretty works of art, but my thumb does NOT fit in that weird place where they put the thumbs!

Well, scratch that from my list of things to try! Sorry Kim! But you certainly have "figured a few things" out for yourself....case in point, spinning! It's amazing how well and quickly you learned that one. And the knitting goes without saying. Very cool mitten!

Oh no that is such a shame.

The mitten is lovely. The colors are so nice.

But we learn from our mistakes... or something like that. The next one you attempt will be nicer.

I've never thought about making those mittens, but that one looks so nice I may have to give it a try. Not that I have any handspun around, but it might work great with some Kureyon.

Love those mittens and you know...it is better to try and fail...can that stuff be resurrected?

Love those mittens and you know...it is better to try and fail...can that stuff be resurrected?

If at first you don't succeed....
I don't have a palm sander handy and may have to try the bubble wrap/pool noodle method instead. Cute mittens, they match the blog perfectly!

What a beautiful mitten!

About the felting, I think most things require practice. It was just your first try. I think you're allowed a disaster or three.