Bryce is one of the most amazing places on earth.  The hoodoos, plateaus and forests make up one breathtaking vista after another.  No picture can do it justice, and my pictures are rather poor.  There are many hikes of varying difficulty that are worth the effort, but we were lazy (and hot) and stayed car-bound.  The sky was full of storm clouds for much of the day and we chased a thunderstorm to the end of the canyon. It was cooler where the rain had been.

The hoodoo cities of Bryce are nothing short of amazing. Where else can you see mile after mile of red rock spires? 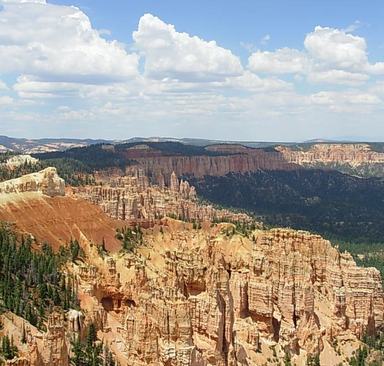 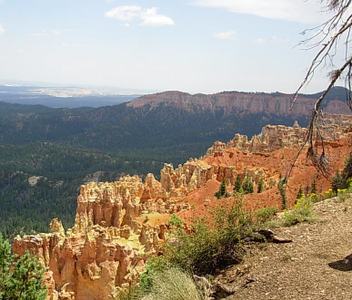 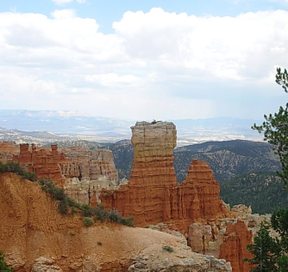 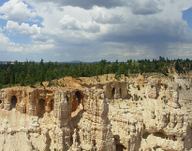 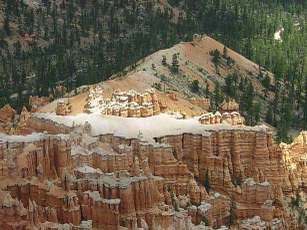 Mother nature is at her most interesting, rugged and enchanting here. 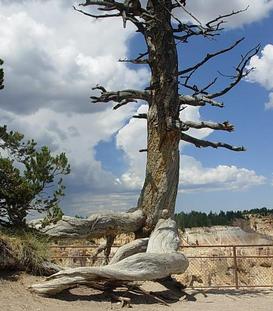 Before you enter Bryce Canyon, there is another short canyon that had even more impressive contrasts of red rock and blue skies (due to the storm conditions we found in Bryce). We stopped in Red Canyon for a few photos and stopped again on our way out of Bryce to take more Hidcote photos (tomorrow, I promise, my sweets). 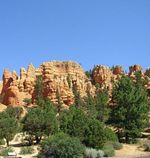 We saw this sign and had to walk up the draw...wouldn't you.  We found a nice spot for more pictures of Hidcote (tomorrow, tomorrow!). 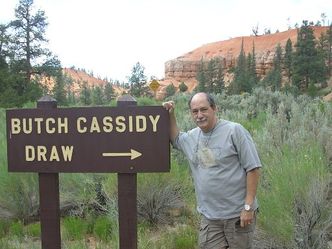 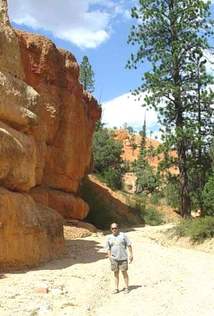 The weekend was just what we needed.  It was good to relax and do something we love to do. 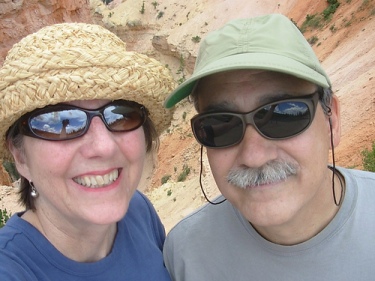 A return to Bryce next spring is a must as we'd like to take a hike or two when the weather is cooler.  Even at 8,000' it was still very hot, but we had the most enjoyable day.  What is that saying about I never promised you a rose garden? However, tomorrow I do promise Hidcote's debut.

What beautiful pictures - and it sounds like you had a wonderful time!

I just ordered my bee shawl kit - maybe you will be helping to pack up mine :). That would make it even more special!

Stunning, Margene. I adore the red rock canyon formations. Thanks for sharing!

It's so good that you take full advantage of the scenery that your beautiful state has to offer. Bryce Canyon looks amazing. Thanks for sharing the pictures!

Bryce Canyon and all it's formations are absolutely stunning! Nice distraction technique.

The scenery really is beautiful there. Thanks so much for braving the elements and taking those pictures.

Pretty amazing. I wonder what the spires are made of, that eroded the rock around them, and left them standing (monadnock).

What breathtaking scenery! Thanks for sharing all those gorgeous pictures.

i can't wait! love the hoodoos, though (i like saying it too!)

I am hoping to get to Bryce Canyon with the kids in a few years...Simon needs to get just a bit older.

Unfortunately, our trip to Bryce predated my first digital camera. My old Olympus was having exposure issues, so my photos were awful. Thanks for the reminder of what it REALLY looked like! Hi, Smith!

Definitely on my list now! I love the photo of the two of you and so glad you got some time off together.

So beautiful! I have only seen this from the window of an airplane as I was heading to California. Even prettier from the ground!!

You two are too cute!! And I love the last picture, with the sky reflected in your sunglasses.

Oooh - I love the pictures. Thanks for sharing them.

I can't get over how stunning it is!

Every time I drive through Red Canyon I wish I had a cabin there. Just gorgeous.

Gorgeous pics! Bryce is one of my very favorite places (as you can see from the pic in my blog profile!). We've done the Fairyland Canyon hike twice and love it; it tends to be less busy than some of the other trails.

Red Canyon truly is a secret place, though it's there for everyone. Bryce takes my breath away, thinking of the forces that formed it over time. Now, enough of that,
we demand
Hidcote, Hidcote, HIDCOTE

Those pictures are lovely. Makes me want to take the trip. Maybe when the boy is older and he can appreciate it too.

it looks beautiful, but i don't see the alligator! help me out!

Another reason to plan for that roadtrip... amazing pics, Margene. A truly awesome place.