May - Five of a Dozen 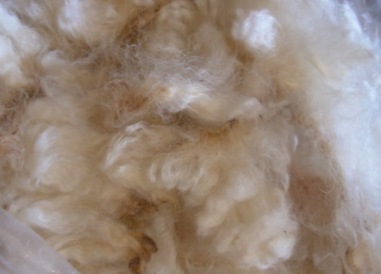 The fleece above represents the beginning of the Fiber Festival Season which starts in May! I've capitalized the words because they are very important to knitters and spinners everywhere...more so now that bloggers can (and do) meet up and imbibe in fiber together.

The first festival of 2007 for the Ewe-tah grrls was the Snake River Fiber Fair.  Cheryl (thanks for driving, grrlfriend!), Susan, Eliza and I headed out very early Saturday morning (yawn) and enjoyed a very nice trip up into the fair State of Idaho. Anne was already there with a booth of Wooly Wonka fiber and we had plans to meet up with Kim, too.  Many of the people at the festival were friends from Utah and, as with any festival, its the people as much (or more so) as the fiber.

We shopped and enjoyed chatting with all we met and spent the better portion of the day enchanted by fiber.  Because the weather is very iffy this time of year, the fair is inside a technical college.  The curved dark hallways gave the experience and cave like mystical feeling, as around every turn was new fiber, a new group of spinners (or knitters) and smiling faces on everyone.

Anne and Dave had a nice set up with Anne's beautifully died yarns and fiber.  Here you see Susan and Anne chatting. Kim has just discovered Dave's fabulous spindles and after she gave one a whirl she just had to take it home. 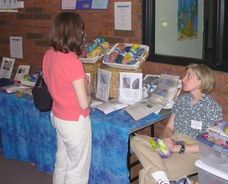 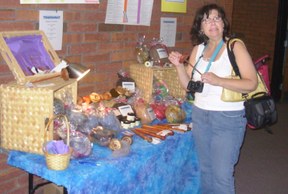 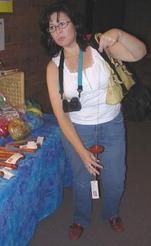 Color was everywhere and Lynn’s colorful bumps disappeared quickly. This picture was taken right after someone bought all the pink (it wasn't me!) and before the green and purple purchased. (The pictures of my other fiber friend, like Judy Jackson, just didn't turn out due to the dark hallways.) 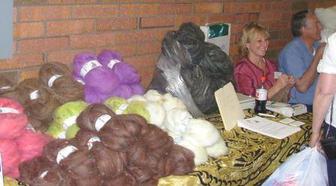 Greensleeves Spindles had so many beauties! Thankfully I have several already. Fiber Addict had bins of roving and racks of yarn.  I'm very sorry I didn't get many pictures of the other vendors.  But, there were many and everyone had a nice variety of spinning/knitting necessities. 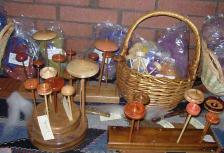 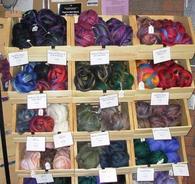 We did manage to make a good haul which made the long drive (3+hours) worthwhile. Here's the back of Cheryl's car piled with our fibery purchases. 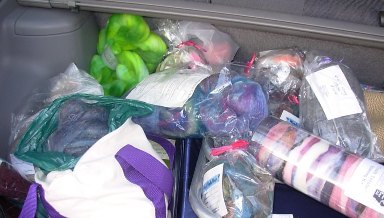 I did rather well, but didn't get to carried away.  My pink phase is still intact when it comes to fiber. 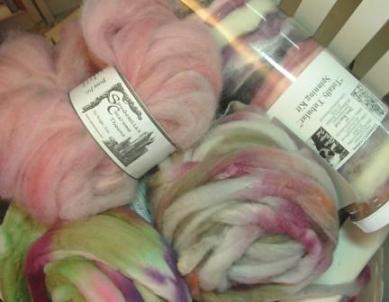 Spinderella's thrums in "PINK", Wooly Wonka merino (under thrums) in "Geisha", WW cormo/angora in "Seashells" and a Totally Tublar Spinning Kit from Crosspatch Creations.  Anne had one in shades of purple awhile back and it's been on my list since. 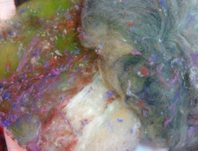 I also bought another batt from Crosspatch Creations in a unique group of colors called "Iced Lemon and Lime".  I'm trying to venture out of the color rut and have some fun!  One of my favorite purchases, from Janet at Alta Mist Alpacas , was a new spindle case. The design style caught my interest and the tassels were so elegant.  It's easy to through over the should and will carry a nice bunch of fiber and a spindle.  I just couldn't resist.

Thus, tis the very beginnings of Fiber Season, the best time of year for fiber fanatics, bloggers, knitters and spinners.  It's going to be a very good year!

Beautiful purchases. I'm really intrigued by the tubular fiber! Glad you had a fun day.

Nice haul! I've seen the Tubular spinning kit out there in blogland. Looks interesting. Looks like a fun time was had by all.

Another great weekend for Margene! I love your haul, you'll be spinning for awhile now, won't you?

i have a knitting needle case like the case 'o spindle you bought. it's barber pole striped. my brother got it ata yardsale, full of # 10 beadspread cotton.
i'm still loving the flower pix on your sidebar.

I like your 'spindle' case. Someone gave me a bottle of wine two Christmases ago in a really pretty (and heavy cardboard) case with a daffodil paper surface design. I've had it sitting on the mantle because it was so pretty, but with no idea of what to do with it. I now think it is going to be transformed into a traveling spinning kit! Attach a cord sling handle, maybe make a hinge to keep from losing the top. As my mother would say, "Do-able." Thanks for the idea. I knew that container's day would come.

Fiber Season ushers in such excitement and possibility! As renewing as spring. :)

We really don't have a fiber season in my neck of the woods. I am starting to feel very deprived. But I'm glad that you are able to indulge! What a beautiful spindle case!

Why on earth do I have to always make such idiot faces? Geez.

Grrlfriend, it was SO GREAT to see you!! I'm still unpacking all my goodies, and am having a great time playing with that beautiful spindle. Aren't we lucky to have such a passion?

A good lot of fiber for Saturday Spin Ins for months to come!!

What FUN! Of course, for those of us on the Right Coast, it's already three festivals into the "season" with another coming up next weekend. (If I go to Cummington (MA) on Saturday, and get to the Big Sky one in Montana, that will make four out of five for me!) By the way, you probably won't like that Crosspatch fiber much, so you can just save it and give it to me in a few weeks, hee, hee!

I've got enough fiber for now, so my wallet thanks you very much for letting us enjoy the festival vicariously! Love the pinks.

What a great write-up! I hope you are going to submit this to Kristi for her edition of Yarnival... just what she said she was looking for! I love the spindle case and will have to be on the lookout for either a pre-made one or a nice wine (or single malt) tube such as Helen mentioned. The fiber color kits are so much fun, all "coordinated", but you will be so busy with everything else you bought, that you'll be blending your own variations soon.

It looks like everyone had a great time. You got some really beautiful fiber!

I have a new appreciation for drop spindles and unspun fiber, thank you for sharing the fun!

Happy Fiber Dance!!! WooHoo Margene! You know how to get the fiber-love juices flowing with stories of festivals, friends, and fiber. Yippee!! Less than a month until Estes! (do I sound a little bit happy?)

What a wonderful way to get some more fiber into your diet! I just want to wallow in the back of that car. What a feast!

Sounds like great fun! I'm hoping to get a Greensleeves spindle at the next Great Basin fair. My kids would destroy a wheel in under 24 hours, but I think I could contrive to keep a spindle hidden from them. :D

Looks like a great time and great products to choose from!

Now, if I only I could have been in two places at once! I too, spent the weekend fondling fun fibers of all kinds of colors, but it was still walking around. What a great fair--sorry I missed it.

How fun! And you picked up some great stuff. I shipped the fleece that I picked up in Connecticut off to Lynn this morning.