Sunday night we were told that Salt Lake City has the WORST air in the country right now.  The cold air is trapped and can't leave, so everything, every emission from cars and industry, every breath you take, every last burp from your hubby, every-everything is still here and isn't going away.  If only we could live in the mountains...but that's a bit beyond our budget.  There could be a bit of a reprieve on Thursday and the temps could be slightly warmer by the weekend.  It must be 38 or higher for someone to win the contest, so keep your fingers crossed it will happen soon!

Credit must be given where due and I would like to thank Miriam and Susan for Kitchenering the toes of Smith’s socks.  There is a block in my brain that keeps the ability to remember, understand or do a Kitchenered toe from sinking in.  I know the mantra and have had the technique, and every trick known, explained to me over and over.  Susan has a method, she calls fool proof (she hadn't met me at the time), and I'm willing to give it a try next time.  She was able to explain how it works in such a way that I didn't hear the usual 'waa-waa-waa-waa', like a Charlie Brown character, and may have understood more of what she said than before.  We'll see. Thanks Susan, but I still don't see how you can Kitchener and carry on a conversation at the same time.

One thing I do understand is how much I love Emmylou and how much more I love the Oberon roving I bought from Anne.  The color, texture and lovely fluff of this roving is creating such a soft, lofty and luscious yarn.  It tells me it want to be a warm, three ply hat to warm my ears during long walks with Moxie.  This must be what a cloud would feel like if you could spin it. It's hard to think of anything else with something this yummy on the wheel. 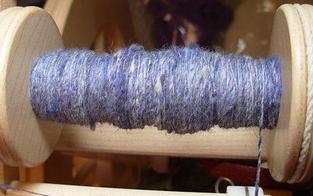 Jessie, a good dyer and spinner, nominated me to show the difference between a three ply and plyed chained singles. I prefer 'chained singles' to Navajo Plying, as it is descriptive of the technique, and there is also a question as to the origin of this method.  Interweave has a very good article, in PDF form, by Dodie Rush and you can find more info by using Google. In my fiber stash was a beautiful wool roving, Delphinium, from Amy’s shop.

The contrast in color made it perfect to show off the different methods and how they create different effects.  I had fun spinning up a couple of samples. On the left is the three ply yarn. Three singles were spun and then plied together as one.  The color twists in the same way as a barber pole with the separate strands twisting around an  'invisible core' to create yarn.  The yarn on the right was created in the chained singles technique.  With this method you can ply a section of one color by controlling the length of the loops. You have more control over the end result and can keep colors in sections.  Both methods create a good three ply yarn. 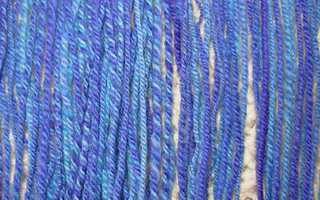 Plying chained singles creates a little more texture in the yarn and it is easy to over-twist (at least I found it so).  Both methods of plying could be used in one project for 'different but the same' effects.  Spinning three ply yarn uses up bobbins and all the singles must be spun before plying.  Chained plying can be executed after one bobbin is finished and the empty bobbin can be reused for the next skein.  I doubt there would be any time savings from one technique to the other and they should both create the same amount of yardage from the roving. 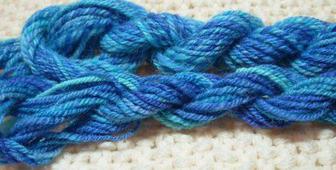 I feel like such an inexperienced 'expert', but it was fun to spin in both methods and share with you the results.

Thank you for giving in and doing the comparison for me. That was lovely. So is your spinning.

Kitchener stitch? I can do it only by having a book in front of me and then by saying out loud which step I am on, and if I get interrupted at any time, I have to frog the whole thing because I can't tell from looking where I was. I don't know if I just haven't done enough socks but I don't think I'll ever be able to graft in public; too many distractions. :-)

Someone can Kitchener and carry on a conversation?!

I'm with Jessie. I have to have the Sensational Knitted Socks page right in front of me and I have to look at it over and over. And I cannot stop mid Kitchener. That said, it is the best and most comfortable toe for my foot shape. Ah, me. A Kitchener life sentence, I suppose.

Thanks for the spinning tutorial. I've never heard of chained singles, but I have tried navaho plying.
I hope someone wins your contest soon. I also hope that we come out of the deep freeze soon. Projected high for today in my neck of the woods is 5F (-15C)

I think it's funny that you can't kitchener. I've never had an issue with it and can definitely talk and kitchener at the same time. The 3 ply and the chained singles are great. I've never done 3 ply yarn but I do love chained singles for the way the colors stay together.
Keep holding your breath!

Kitchenering? I have a block with that too, but also have done it too few times for it to sink in. A lovely friend gave me cheat sheet that I shall put to good use next time and definitely not in public. Love chained singles!

I am exactly the same as Jessie with the Kitchener. Each and every time, I have to pull out my Nancie Wiseman Book of Finishing Techniques AND a photograph printed from somewhere online that a friend sent me, and I have to cross-reference them constantly and say each step out loud as I go along. I STILL end up with problems pulling it all the way through, but with some fiddling, I always manage. I even Kitchenered the Rogue hood -- but just like passing my steno test at 240 wpm, I could probably never do that again in my lifetime. Heh.

Kitchener: I can do it, alone, without a lifeline now. But don't interrupt me, pleeze. I would love to hear Susan's method. I understand the concept, but I can't "see" it yet, so I do it by rote, which is never particularly intelligent.

Your demo is a useful one. I can never predict which effect I want in my knitting, however.

Beautiufl yarns. I love Chained plying. Something about feeling like I'm crocheting and spinning at the same time.

I don't usually have a problem kitchenering and can do it while having conversations. I think that it's one of those things where it really just needs to click and then it will always be with you and you'll look back and wonder why you ever thought it was so hard. Getting it to click is the hard part.

That was a good lesson on three ply. I'd bet most haven't htought about it much. Your description of an inversion brings it home.. nothing escaping... I want to air my house out after cooking brussel sprouts.

I've done a fair bit of experimenting with both and while I enjoy doing the 3 bobbin ply method much more than the chained singles method, the benefit of color separation is undeniable.

Lovely job Margene, and that air is really fairly frightening. I hope something causes the inversion to lift soon.

I must be weird. I like kitchener stitch. There's something so satisfying about it to me. Gorgeous yarn, Margene!

Thank you for showing us the difference between the three plies!

Thanks for sharing that! Even if I just heard Charlie Brown's teacher... the plying is beautiful. Me and plying? Like you and kitchener. :)

I am the same with Kitchener. I have to look it up every time and battle through with teeth clenched and a "don't dare talk to me right now" look on my face. I think the problem is the way the yarn has to go through the stitches just seems totally counter intuitive.

that oberon is gorgeous! i'm drooling over here. and as much as i hate kitchenering it i get into a rhythm with it and haven't had any problems. i'd like it better though if little elves would come in at night and seam and kitchener my stuff for me :o)

I can't believe it--I can barely SEE the great big mountain! How awful! :-( I think someone in Salt Lake should patent the world's biggest fan and blow it all away.

No Kitchener for me either, but you knew that already. ;-)

I have to look at instructions to kitchener, unless I can see the stitches flat, rather than on the needles. If they're flat, I just run the yarn through them, following the pattern of the stitches below, to make the sewn row look like knit stitches. It makes TONS more sense if I can see them flat.

I can only Kitchener using Nancy Bush's directions from Folk Socks, mumbling to myself "knit off" or "purl on". I thought I'd never be able to do it at all, so this is OK with me...But I was really impressed when I saw Teri doing it from memory. Maybe I'll get there someday, after I make 70 pairs of baby socks or something...It actually became much easier from me when I stopped trying to understand why I was doing it, and just started following the directions. Think less, knit more, right?

We're in the middle of a temperture inversion, too. Luckily we live above the fog. Someone told me about yours when she saw a picture on my blog. Makes for some interesting photos.
Li

I thought "Navajo plying" or chained singles (same thing!) was the greatest thing since sliced bread first time I tried it, and for manipulating color I still like it. However, I don't consider it a true 3-ply which I usually prefer if color isn't an issue. (I would never use chained singles for socks because of all the joins.) You did a great job on both, Margene! As for Kitchener, I finally "got it" for stockinette, but forget garter or patterns. However, everyone who has a problem should RUN and get Lucy Neatby's second DVD which has a magic answer to old Kitchener!

I really need to work on my chained singles plying - since I love long color repeats, that's the way to go.

I hope the air clears soon. Not only is it bad for you, but you must miss seeing the mountains. Also, thanks for the plying comparison. I like the looks of both, but think I would enjoy chained plying best.

I'm with Jean, I love how wonderfully tidy Kitchner stitch makes things look. That said, I still have to double check on my cheat sheet every time I do it though.
Your yarns are looking quite lovely, btw.