Lifted (May Be TMI)

What's a grrl to do when her spirits need a lift?  There are several things that came to mind on Saturday morning.  First was to spin.  I did just that and finished up the third bobbin of CMF Satisfaction, which was a very satisfying moment.  The next thought was to head out for a work out...exercise is good for what ails.  But, that thought was quickly set aside as the much needed under*garment broke a strap! Crap!

What's a grrl to do when her spirits need a lift and the universe just told her it's time for an foundation overhaul?  Go SHOPPING!  Yes, a trip to the LYS would have lifted the spirits, but done little to lift the 'grrls' (as Laurie calls them).  So, it was off the dreaded mall, a place I haven't stepped foot in for well over a year.  A very helpful clerk spent an hour and half with me, brought at least 18 (or so) items for me to try, and finally found the perfect thing (or two).  Just to make sure that the mood stays as lifted as the 'grrls'...I went all out and bought the prettiest one, loaded with frills.  Sheer brown with green embellishments...what's not to love!  (One in pink with black trim and second, all lace in nude, will also soon be mine.)  Oh and the proper work-out wear was also purchased, so I made it to the gym.

What's a grrl do when her spirits need a lift? Read the guesses to my contest! (Post below.) You can enter a guess until the warming trend actually comes our way.  It snowed a bit on Saturday and that was a nice change from the haze. A sifted layer of new white powder covered the dreary landscape.  The below normal cold remains, however.

What's a grrl to do when her spirits need a lift?  Read MAIL from a dear friend and talk to other friends on the phone.  This grrl loves her grrlfriends from near and far.  Thanks Norma for bringing a lift to my day and to my life, too.  (You all do, actually.)

What's a grrl to do when her spirits need a lift?  HEAD up...up the canyon! Sunday dawned a little brighter as the storm had slightly lifed the inversion.  It had been several weeks since our last trip to SF and we knew the trip was a must if the spirits were to continue on their way up!   Our spirits were lifted even further, when in walked Cheryl and Larry, only a few minutes after we started to eat.  Talking to pals, breathing the clear, crisp air (that was still warmer than the valley air) and seeing the clear blue sky was a big lift to our spirits. 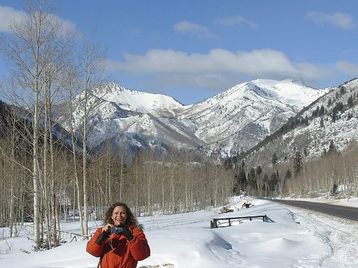 Purty attire for the "grrls". May they and your spirits stay lifted. Now if only the inversion would lift and give you some decent temperatures and sun in the valley! Hang in there!

If you're spirits are still dragging after such an uplifting weekend, well, they just surely cannot be...

Glad you got your spirit and, errr, other things, lifted. Hee!

Love lift us up where we belong....

(Sung in my best Joe Cocker.)

Have a FANTASTIC DAY!

Sounds like you did all the right things. Hope your spirit stays lifted!

Numerous uplifting events combine to bring a smile on a Monday morning. Have a great day and a great week!

Here's to a lifting of the haze, dear grrl. Mwah!
xoxoxoxo

Sunshine is the cure-all. We had a brief bit on Sunday, but it worked wonders.

Yup, sounds like you got underwires and padded straps for your whole weekend! Now, remember to stay well hydrated and maybe boost those b vitamins till life brightens.

Those "foundation" clerks can really be wonderful, can't they? You certainly got a pretty one, and it was great having breakfast with you.

I hope things look more cheery for you. Sounds like a very nice weekend.

Never underestimate the power of a good foundation garment! Hope you got the matching underwear.

OMG, that last photo took my breath away and lifted MY spirits, from way over here!

I'm glad my card arrived in good time for the weekend. *mwah*

Beautiful photos! Fab new undergarments! Visiting your blog always gives me a lift Margene! And what a precious note from Norma. :)

hope you have a lovely week!

Pretty! I personally like my under*garments to be pretty and girly even if I only wear jeans and tshirts everyday...it puts a little sass in my step:o) Hope the spirits stay lifted!

Flirty and Lacey! What's not to love about that??
Hope your mood (and the temperatures) improve each day...we're chipping the ice off things around here today. Which means a day off for me! Whee!
(((hugs)))

I hate "foundation" shopping, but I do love those mountains!

SO glad you found multiple ways to lift your spirits and the grrls!
xoxo

Sounds like a good Sunday, indeed. Can I ask you where you find work-out pants that are LONG ENOUGH in this town? I am ready to trade my life savings just for a damn pair of sweats that cover my ankles...