January - One of a Dozen

January can be a very cruel month.  This valley, which is surrounded by mountains, can easily fill with cold air.  The warm air aloft acts like a cap to keep the cold air in and the valley stays gray, slate gray, and nearly the same cold, damp temperature day and night. 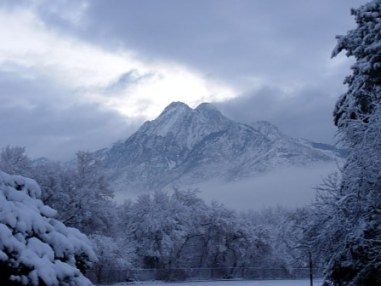 Instead of focusing on that aspect of January, let’s take a look at what is wonderful about this coldest month of the year. Last Thursday it snowed all day and Friday morning we woke to a real winter wonderland.  The landscape was pure white, the trees heavy with a thick icing of snow and, as the early light of dawn grew, the mountains peeked out from behind their shroud of clouds.  Winter created a living, three dimensional Ansel Adams photo.

The cold doesn’t bother me if we can see blue skies. Even partly cloudy skies are fine, as long as we aren’t socked in the gray gloom.  January is when the light of dawn arrives earlier...the first sign of more daylight ahead.  The mountains are a great place to go no matter the weather in the valley.  It can often be warmer at the higher elevations if the cold air is settling into the valley bowl.  The white cover of the mountain peaks against the bluest of blue skies always fills my heart with joy and revives my soul.  Having the sun dance across my face on the coldest days of winter is especially welcoming.   January means cold, white, sky blue and beautiful. 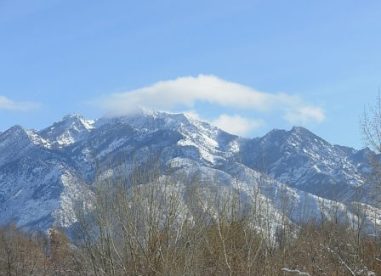 January is also the time for visitors to come here to enjoy the Greatest Snow on Earth.  Laurie and Mr. E arrived late on Saturday because of a delayed flight from Denver.  We were still able to make it to Park City in time for dinner and a birthday celebration!   Right now Laurie must be feeling on top of the world, with clear blue skies (yes, that picture was taken yesterday), a new wheel (a good reason to return home), and a virtual birthday party going on at her blog.  May it be a fabulous, fun and fear-free day, Laurie!

Your photos make me wish for snow - although it's starting to look like we won't get any this year.

As always, your photos are spectacular!

Thank you! Yes, and yes, of course. Those pictures are a perfect capture of the mountains and the snow. They show most of the beauty that travelers seek in Utah. Only a picture of you would complete the magic that is Utah.

ohhh that first picture looks like a painting!!!
and guess what??? Its finally SNOWING here!

I think if I want to play in the snow this year I probably have to go visit you;)

Absolutely breathtaking shots. I think I may have to join in this 12 month photo thing. Certainly it's less challenging than the ABC along and a wonderful opportunity to share more with our blog friends.

Thanks for a nice boost on this drippy, dreary NYC morning!

Just shut up with the "greatest snow on earth" crap, ok? I'm not even sure I remember what it looks like. Happy Monday!

Beautiful!!! Sounds like you guys had a marvelous time the other night.

Great photos! Prettier than the damp and rainy day we are having. Yay, to wonderful celebrations with friends, blue skies and new wheels.

These are the BEST photos ever!! I love winter and really miss it this year.

Beautiful pictures! It almost makes me miss 'winter weather'! Here in WA we have is the "slate gray and the same cold damp temp", but thankfully rarely have snow.

Great shots! Where did you guys go for dinner? (BTW..this is my first comment of the day, so we'll see if your theory holds.)

You take THE best photos! Makes me want to move north!

I love seeing your pictures, especially since we haven't seen snow yet.

It's an amazing landscape and you seem to have captured it well. I imagine that the vastness of the mountains can only be experienced in person though!

I just love your pictures. I've really enjoyed the lovely weather here but I crave snow. I'm still like a little kid hoping for a snow day.

Your mountains are as stunning as always, but that third picture just blows me away. Have fun with Laurie and the Mr. E man!

Those are beautiful, Margene. I like to look at photos of snow!

Nice 007 post. Great photos too. The third picture is my favorite.

Winter is so beautiful there. We have too much gray in the Pac NW, but the rains bring a lot of green beauty. Your photography is inspiring! Thank you CS

Fantastic pictures. It looks so beautiful there.

Margene, you live in a landscape painting, it's so lovely all year round, but especially the snow. March is our coldest month, and when we usually get our ice storms. All we got yesterday was 4" of rain and a flooded barn.