Getting Better All the Time

It's wonderful having a few spindles around!  In my state of constant curiosity one must be in continual motion. This roving, merely mark 100% wool, is from the Angora Cottage, a local small producer.  The preparation was smoother than any roving I have tried to date. It was combed into almost silky strands which made it hard to draft. At first it was a struggled to keep it together while it slipped through my fingers, but once its qualities became know to me, I was able to do a nice job of spinning.  It plied up well and the skein just may be my most consistent yet. (Click to really get a look.)

Curiosity gets the better of me daily, so I pulled out Amy's Spunky Eclectic BFL roving.  Chocolate Dipped was right up my alley and it is spinning up to be so fun and beautiful!  The Blue Faced Leicester is very different from the above roving as it has a softer, fuzzier texture.  Both types of roving took only a short time to understand. The qualities of both make good yarn, but the BFL is a bit easier to spin.  Amy has such a fun color sense and I'm having fun playing with the colors while I spin.  This pink and brown skein was first up in the spin cycle. The next section of roving is mostly red, so I'll add just a little pink to it and see how that works up.  It will be fun to play and create different skeins by mixing the colors. I also need to put more twist in the BFL if it is to become socks. It has been interesting to try several types of roving and figure out the best way to handle each one. 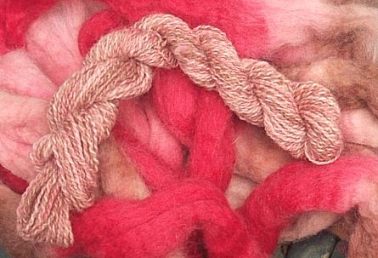 By working with colorful rovings now I hope to understand the basics of spinning in color.  Later I'll be able to share them with you when it's time to Dye/Spin/Knit.  You might call it 'getting my ducks in a row'. 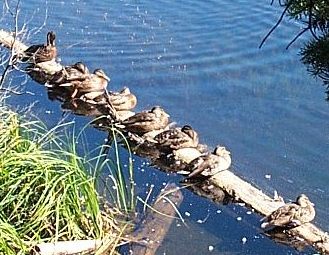 Smith took this picture at Silver Lake and I just had to use it!

AWESOME picture! Have a great day :-)

Love that picture...and your spinning looks fabulous. The Angora Cottage wool looks perfect to me!

Your spinning looks great! It's so much fun playing with color when I spin. You can create really beautiful and unique yarns!

The spinning is getting fantastic! (Ducks in a row....heh, heh!)

The very first roving I learned to spin came from Angora Cottage - I love their stuff!

That Angora Cottage roving/spun yarn is luscious, Margene! Your success is inspiring me. After several attempts to get the hang of this on my own, I've signed up for a spinning class.
Uh-oh. The slippery slope....

james taylor is in my mind now singing; my ducks are all in a row o o o....

Oh, that first skein is gorgeous! I cannot believe how quickly you've improved! Then again, I can believe it. I'm convinced that there's nothing you can't do.

Well, you are just progessing quite nicely with the spinning - bravo! Nice shot of the ducks.

That duck picture is perfect! Love it!

I think I'm almost lucky that working at Village Wools has kept me from spinning. I am super sensitive to the smell of sheepies and all of the roving/fleece we have in the store gets to me when I walk by it. I know once it's clean it doesn't smell but I'm going to pretend, in my little world, it does, just so I don't get hooked on another craft!!! HA!

I love living vicariously through all of you new spinners though!

Your yarn is looking lovely, Margene. The duck picture is adorable.

I love the duck picture! Your spinning looks great!

So, I'm wondering if you have reached the point where spindle spinning is zen-like.

That red angora is looking really nice. You know how I am with red!

The ducks are too funny!

Ducks in a row! Ha! You are too much.

Ah, yes. You're sinking deeper and deeper into the Black Hole of Spinning! LOL And how long before you expect to try your hand at a wheel?

Your yarn is so pretty. I just got my spindle yesterday, and I'm looking forward to getting strarted soon.

So are you going to buy a wheel at Rhinebeck, or will you get one closer to home? Love that photo!