Zeneedle...needleart as life
Home Archives Profile Subscribe
What I Did On HPZN Day
PS and Mother Nature It is truly amazing that this pair of socks is finished AND that they look so cool. The P-Word socks enjoyed showing off at Snowbird on Sunday.  Can you see 'em hangin' ten?  For some strange, serendipitously happy reason the socks are very similar in their color changes.

The reason I'm amazed that the socks are finally finished is that there seemed to be little I could do correctly on the second sock. The first sock was interesting, exciting to knit and, just watching the color change with each stitch, was fascinating.   The second sock was rife with errors. It started in the pattern directly after the cuff and was due to my lack of ability to remember a decrease in one section (over and over).  You'd think that if you make an error once would be enough to help you see the light and get back on track. BUT, NO...I had to do it 5 times, FIVE times. After the light came on and progress began the leg went quickly, smoothly and there was no problem until the gusset area of the foot.  This vicious sock will always come back and bite you in the butt if you're not careful. Do not become complacent or arrogant around this sock. You must be on constant guard.

For some inexplicable reason, even though I thought I was following the chart, oneYO at the end of a row was missed FOUR, at least FOUR, times. Now, lest you think it isn't about the process and that I just talk the talk and don't walk the walk...at no time during the daily frogging did it enter my head to stop knitting,  throw the sock across the room, or give up (however, chopping it into tiny pieces with sharp scissors did crossed my mind, fleetingly).  Several 'technical terms' were uttered at the sock but, I continued to process and reprocess. It is all knitting and it was well worth the effort. 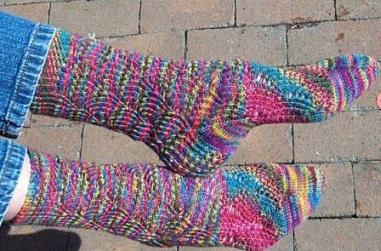 they look great! and i think you still have a little bit of time to wear them before it gets too warm.

Perserverance and determination are good qualities for a knitter to have. Some patterns are just destined to spite us at every turn, but we laugh in their face when we prevail. Your P-word socks are gorgeous, and I'm glad they had a chance to be showcased before being put in the drawer until the fall.

They're beautiful, and I'm so glad you had a chance to wear them! I like the way the STR colors move down the foot, too.

Future's so bright - I gotta wear shades! Those are some nice-coloured socks. The change in the colours moving from the leg to the foot is facinating. Enjoy!

They were well worth all that frogging! They look fantastic! I've added this to my list of to do's thanks to you!

They really are gorgeous! The yarn choice is perfect for that pattern. I like the coloring on the bottoms, too. Do you win a merit badge for completing them?

Beautiful! Love the colorway you chose.

They are stunning (thud). P is for perseverance.

Wow, those are some bright socks.

Well worth the effort, indeed! They are lovely and a great fit for you ;) They are the ultimate PS socks too - a little bit of every color.

Hope you are well!

Those socks are WICKED cool!

They look great! I have been looking for a pattern that will show off a variegated yarn but isn't too boring - looks like this might be it!

My own P-word socks are at the bottom of my knitting bag. I realized I probably won't have enough yarn to finish them with 3 repeats of the pattern in the leg. I'll have to go back to the end of repeat 2 and redo the heel. After all the frogging I had to do to get to the middle of the foot I'm really hesitating. Your socks are lovely and an inspiration to finish my own!

My, but those are lovely socks, Margene. I'm still in love with that colorway, too.

Margene! Those are truly beautiful socks! I've been watching your progress and have tucked the pattern away for future use. When I have suitable time and patience to attend it, of course.

Once again, I bow down before your magnificence!

Your P-word socks are great! I love the colors and the way that they change. They definitely look like they are worth all of the heartache they caused.

Now those are some FUN socks. Glad you tamed the mighty fish!

Even the pooling matches. I love them. I hope my mom can get hers straightened out!!

The socks look so cool! I love how they are almost the same. I'm only on my first one, but I'm having the same issues you described. No way am I even thinking of giving up, just going to tinker on with it!

The P-word sox are WAY COOL!!!

B-Ewe-T-Ful! What yummy socks! I'm so glad that you weathered through the 2nd sock.

Margene, those are gorgeous. Almost makes me want to tackle that pattern.

They are beautiful Margene!